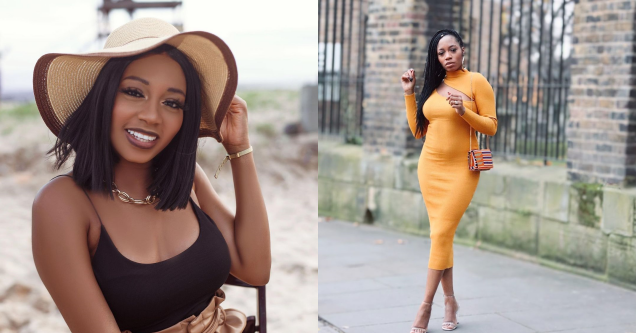 BBNaija star, Khafi, has come out to deny claims that she and her fiance, Gedoni, are expecting their first child together. Khafi and Gedoni met during the BBNaija season 4 show. They developed an affair in the House that blossomed and culminated into an engagement after the show.

Only recently, there were rumors that she and Gedoni have secretly tied the knot as they now adorn wedding bands. Her fans have since then been watching her for signs of pregnancy with many congratulating her for “being pregnant” with their first child.

READ ALSO: OAP, Kaylah Oniwo Forced To Share Private Information About Her Body And Health After A Fan Made An Unappealing Comment

In a lengthy post shared on her Instagram page age, the reality TV star dismissed claims she is pregnant and also asked people to stop putting such pressure on women. She said whenever she gets pregnant she will share the news and until then, people should stop with the pregnancy comments they leave on her page. Read her post below

”The way I’m looking at the next person who drops a pregnancy comment on my post. Continue reading if you don’t want to get BLOCKED. (I’m not joking).
•
I’ve ignored them for the longest now but according to the womb watchers on social media I have been pregnant for over a YEAR.

And when I’m on my period it is even BIGGER. I don’t owe anyone a flat stomach but still I try to suck in my belly in every single picture and sometimes I do it better than others.

The worst is that even when I’m proud of my ‘sucking in skills’ on a particular picture there is always SOMEONE who still comments something about pregnancy. This is a habit that HAS TO STOP.
•
First of all, women are more than baby making machines. A woman’s fertility or decision to start a family is for her to decide, not for you to comment on in every single picture… Must our stomachs always be the first thing you look at??
•
Secondly, I’m not just speaking up for myself but for women in general. You may mean well when making pregnancy remarks but it is not always a compliment.

For women who have had miscarriages, have been trying unsuccessfully for a baby, or simply conscious about their weight it can be very distressing, triggering and also puts a lot of undue pressure on them.

So unless someone has announced a pregnancy or told you then please be nice and DONT COMMENT OR CONGRATULATE them on one.
•
Trust me when the time is right I welcome pregnancy (twins please Lord!) and starting a family at God’s time.

But until I’ve said I’m expecting please stop with the pregnancy comments. I’ll have no patience for them anymore and any one who writes such comments will get BLOCKED.
•
To those who mean well, thank you so much, I do love you all But to the amebos please be amebos elsewhere . It’s pressure enough being a woman, so let’s not add to it.” 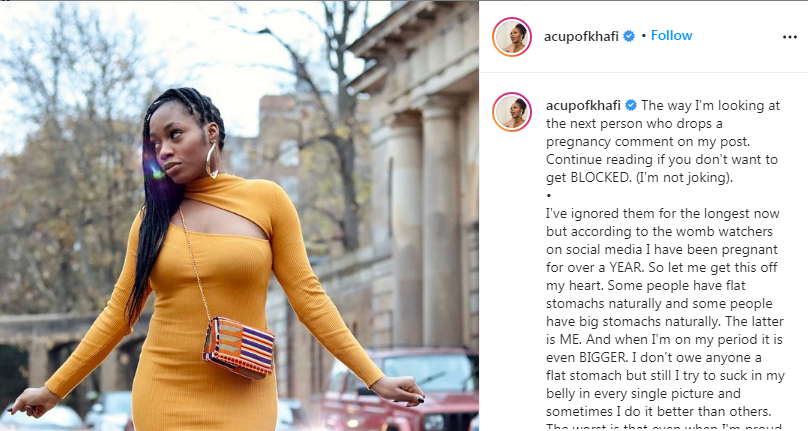