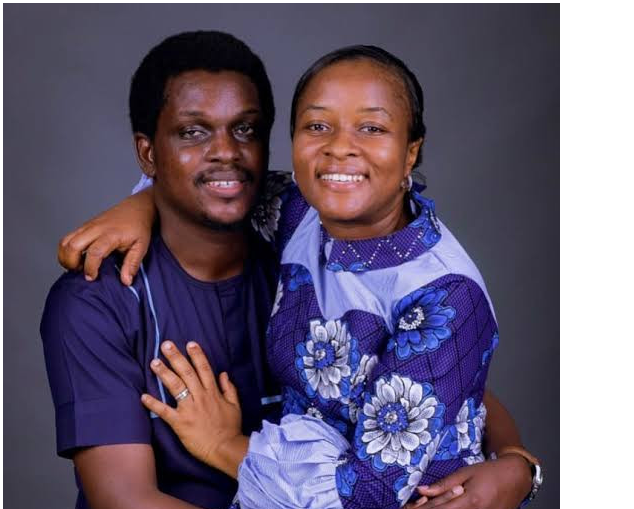 Pastor Timi Adigun of MINE Teenage Ministry has reacted to the allegations that he sexually assaulted a number of the teens in his care. It was claimed on Twitter that Adigun, who is the leader of The Ark Church, was involved in inappropriate sexual acts with his female teenage members for years.

The teenage ministry, an offshoot of his church, encourages sexual purity and even has a yearly “virginity day”. However, while teaching them about sexual purity, he was not living up to his teachings.

The married pastor was also accused of molesting those who lived with him for over 5 years. They claimed that he started the “Father Me” series where he encouraged people to submit to fatherhood, only for him to use the opportunity to allegedly molest those girls who took him as a father.

His female victims are reportedly “extremely hurt and broken”. When his action was made public and members started demanding an answer, he reportedly closed The Ark Church and moved elsewhere to open another church.

Mine Teenage Ministry made these accusations on Twitter via its official Twitter handle then claimed that his wife, Timilehin Adigun was aware of his actions and was “complicit”.

Journalist Akan Imoh also called him out stating that he and others investigated the allegation against the Pastor and everyone they spoke to ”confirmed” the story.

This is a Call Out!

1. I came back to Lagos some months back to find out that Ojodu Berger, my area was awash with rumours that one of the biggest teens ministry had scattered due to allegations of sexual harassment. This is a church that started in this area, and has grown to become the biggest teens movement in the country.

2. Pastor Timi Adigun, who founded MINE teens ministry was being accused of having abused not one, not two, but several girls in his ministry. This is a ministry that is built on the idea of sexual purity. In fact their biggest programme is tagged ‘Virginity Day’ where they have marches all around the country and even abroad to promote sexual purity.

3. I was shocked. In fact, I felt cold. This is because I so much respect this man, and his ministry. I have been a teen leader/counsellor in this area for close to 15years, and so, I feel deeply connected to this issue. I have taken teenagers to this ministry and confidently told them to join that this place would be best for them. I have invited him to my local church before to minister, and even pushed that he be invited to our national camp. So, nobody can tell me I’m that this isn’t my concern.

4. So, when I started hearing the rumours, I took steps to investigate. I had meetings with some of the top leaders in the ministry. I joined hands with two other journalists and we investigated the matter. We spoke with everyone who mattered, even up to the former pastors. Everyone confirmed the story. They were even urging is to go ahead and publish. We even created a Google form for former members to register their displeasure. You need to see the anger on that form.

5. The very annoying thing is that this man doesn’t seem like he cares. He just wants to move on. The last I heard is that he has started another church/ministry. Something called ‘Haven of Love’. Actually, MINE Teens Ministry was closed without any proper explanation. The church was also closed too.

6. You just throw teenagers into confusion. There’s too much anger on the streets. These guys have been hitting up my DM, and I wasn’t even a leader or a member of the ministry. They are confused and angry. Can you imagine, you’ve been telling these kids not to have sex till they get married, but then, you’ve been doing stuff with them in secret. Do you know how they would feel? Do you know how many of them are going all around looking for revenge sex?

7. Some of these teens can’t even tell their parents what went wrong. If parents hear, that’s the end for some of them. They will never be allowed to go out again. For some, it’s back to their boring parents churches where the messages are not targeted at teenagers. I remember one time, when I was still an executive in church. I and another teen leader went to see the mum of a girl we were trying to bring to church. The mum looked at us and shook her head saying we were young boys, and she can’t release her daughter to us. She asked us if we had heard of Timi Adigun and MINE Teens Ministry. That that’s the only church she can allow her daughter go to. Well, we sha carried our legs and left. Because she was right. We were just young boys. Who would want to leave their daughters with us. But look at where it ended. The place parents trusted.

8. If you’ve worked with teens before, you’ll know how frail they are. That is a very tender age for them. They want to be led right. Right now, they are just wondering the streets looking for what next to do. This was a ministry they called home. Right now, the flock is scattered.

9. It is things like these that make outsiders mock us as Christians, mock our pastors and our faith. These issues need not be swept under the rug.

10. What we are asking for is simple. We want Timi Adigun to come out and give an explanation. He can’t keep silent. See, to be honest, if you people know the respect I have for him ehn. I’m so willing to forgive him.

That’s me, who’s not even a core member. Now, imagine, those who are his followers gan gan. All we want is for him to explain to us. Are these things true or not? Why was the church closed down?

11. If these things are true. These are what we want:

— An admission of guilt

— Therapy/Counselling for the girls involved

— Handover of the church leadership

Pastor Timi has now responded to the allegations. He said he is “deeply sorry” to everyone his “actions and inactions have hurt”.

“The truth is, I was involved in inappropriate behaviour with females over a couple of years.”

“I went against the sexual purity message I preach and believe in.”

He, however, stated that “there was no sexual intercourse with any” of the girls and “none was a minor.”

He exonerated his wife, saying:

“My wife did not know about these actions while they happened.”

Read his full apology below and also the accusations made by Mine Teenage Ministry on Twitter. 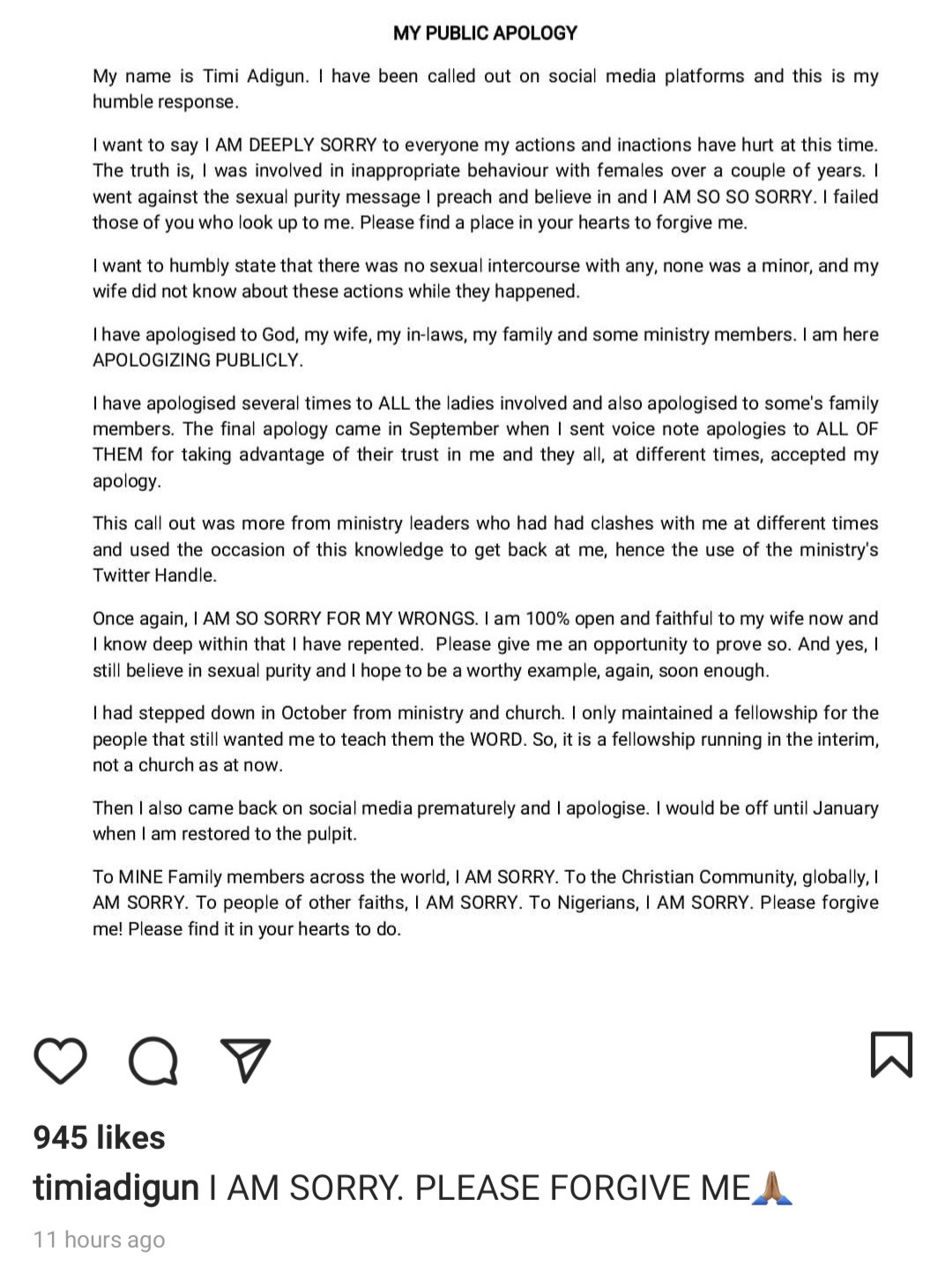 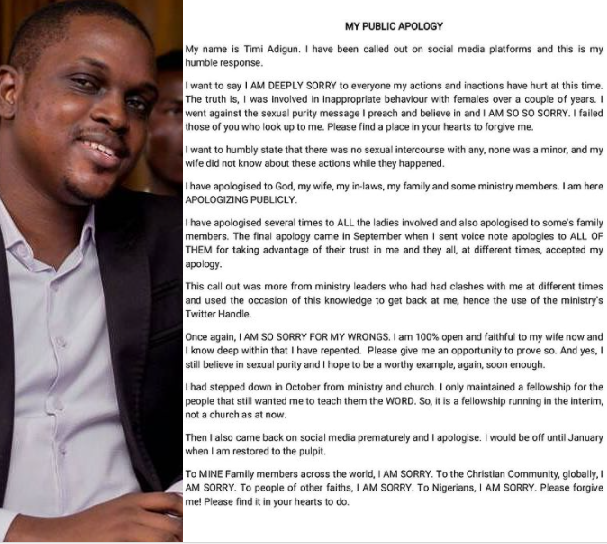 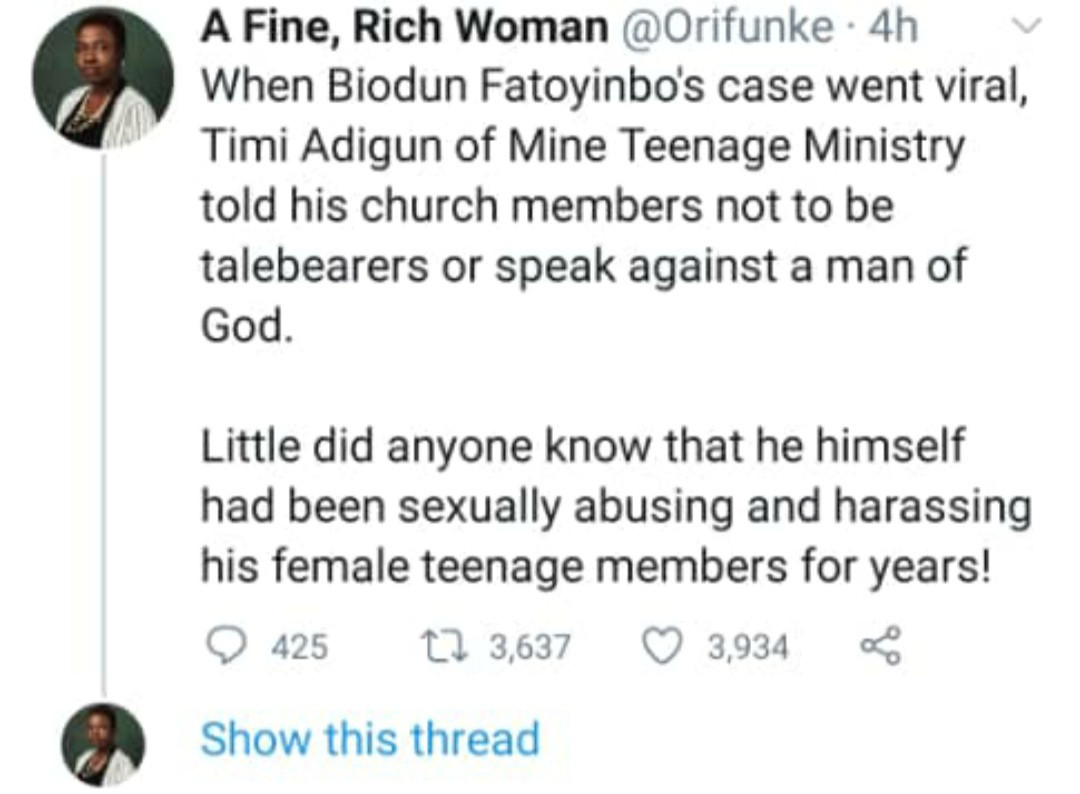 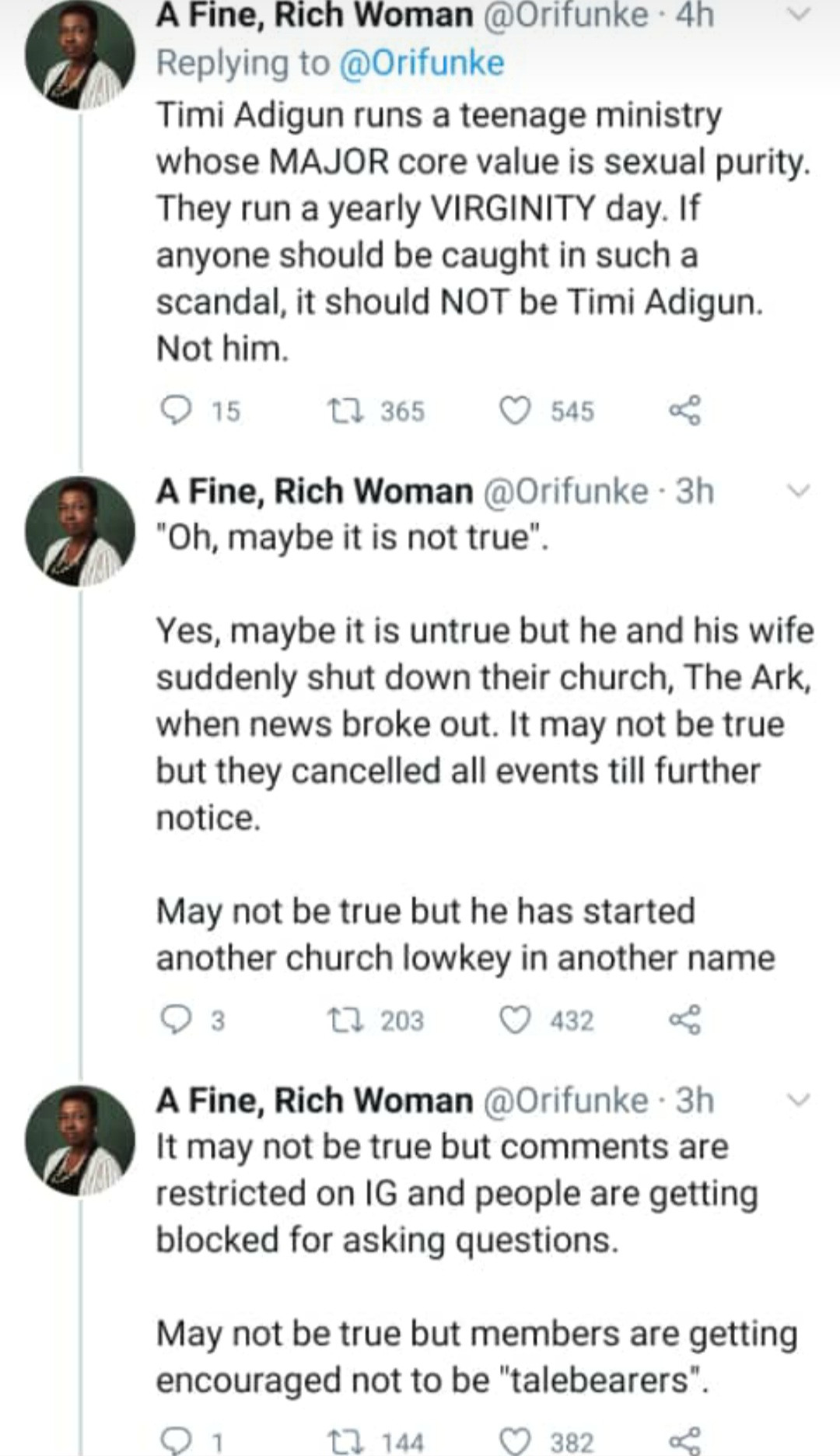 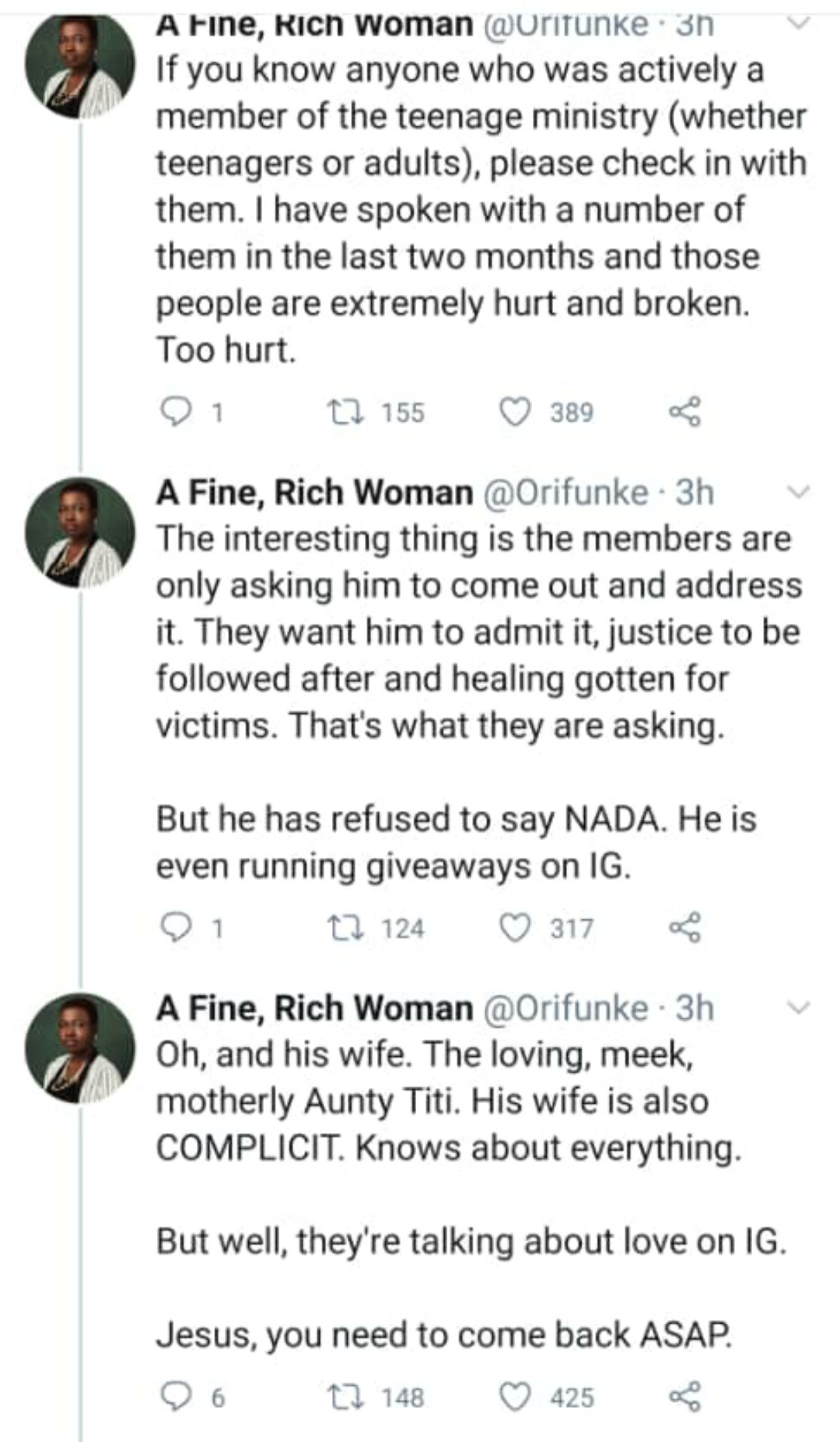 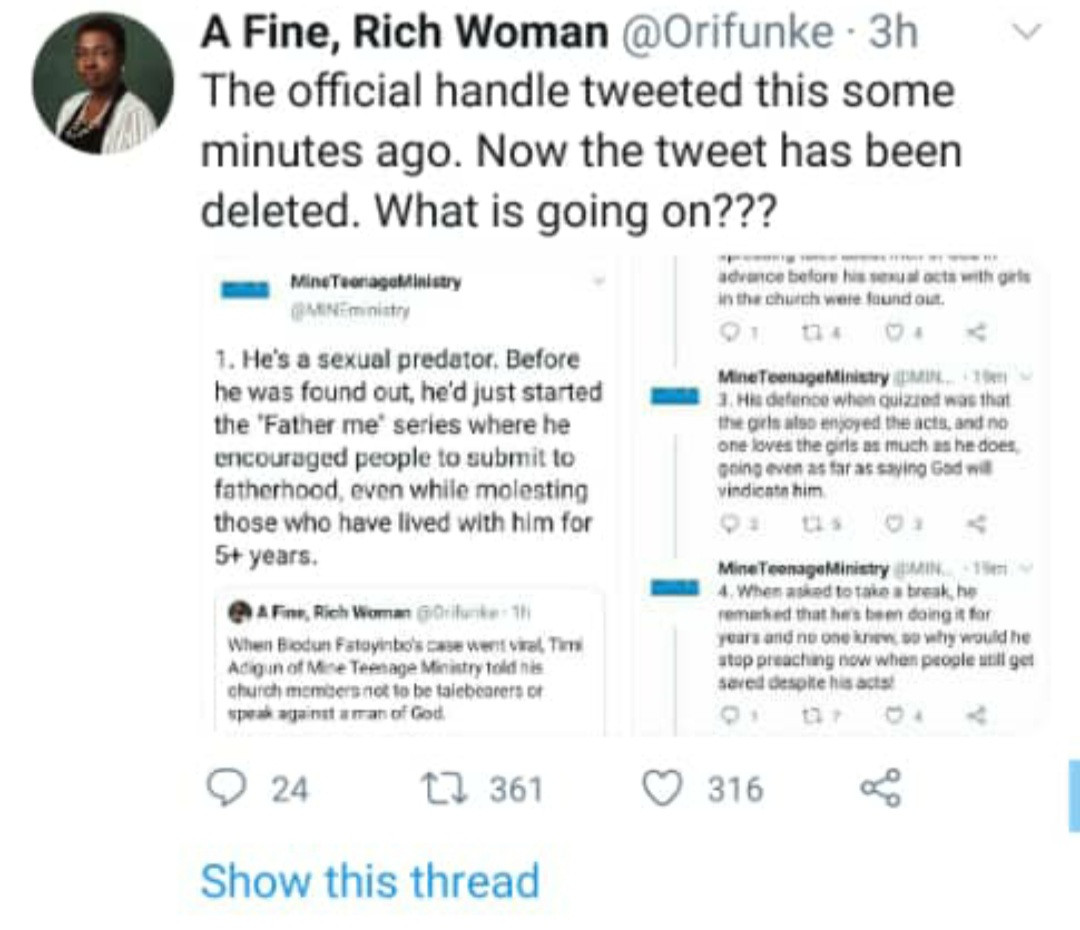 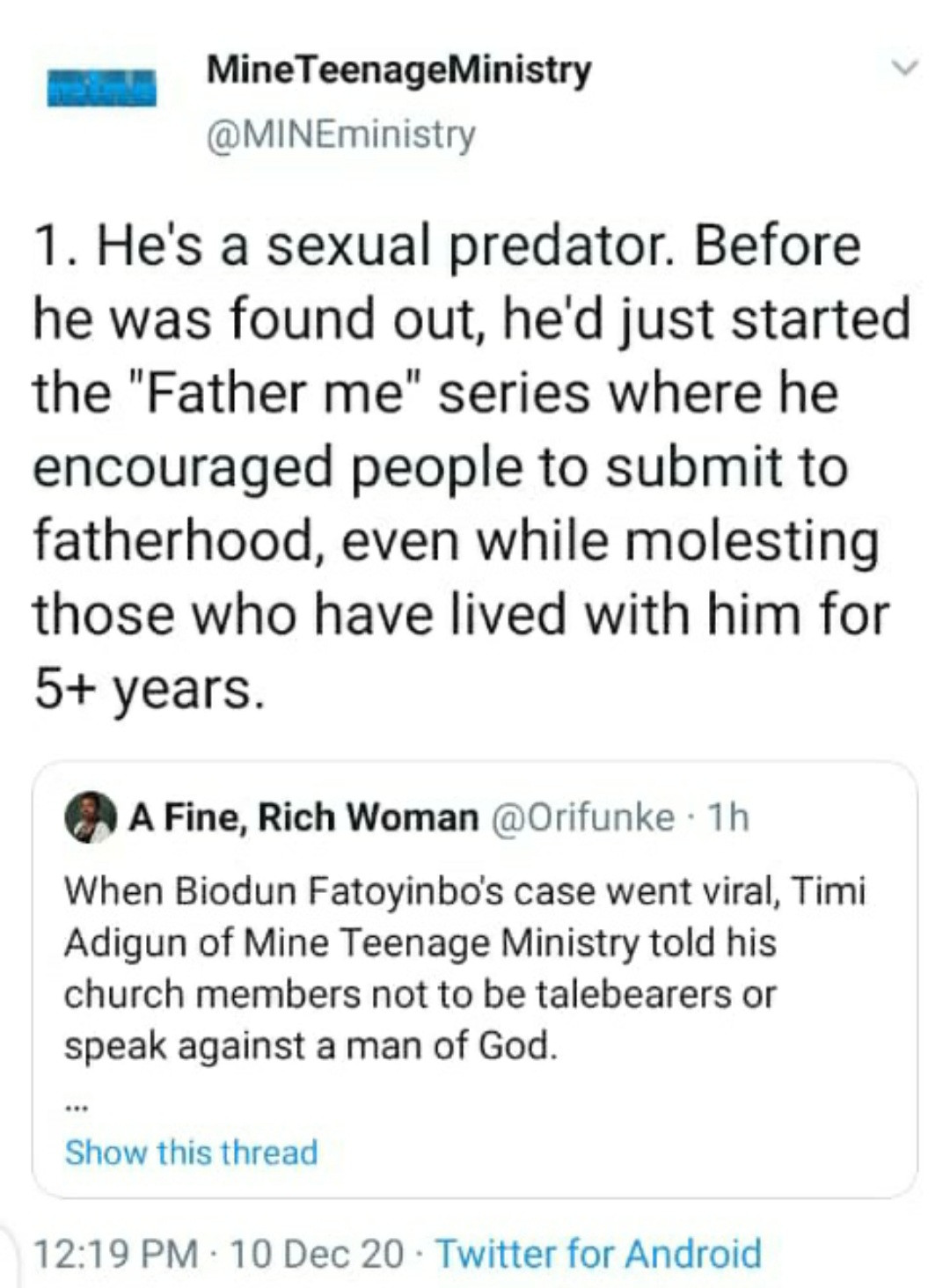 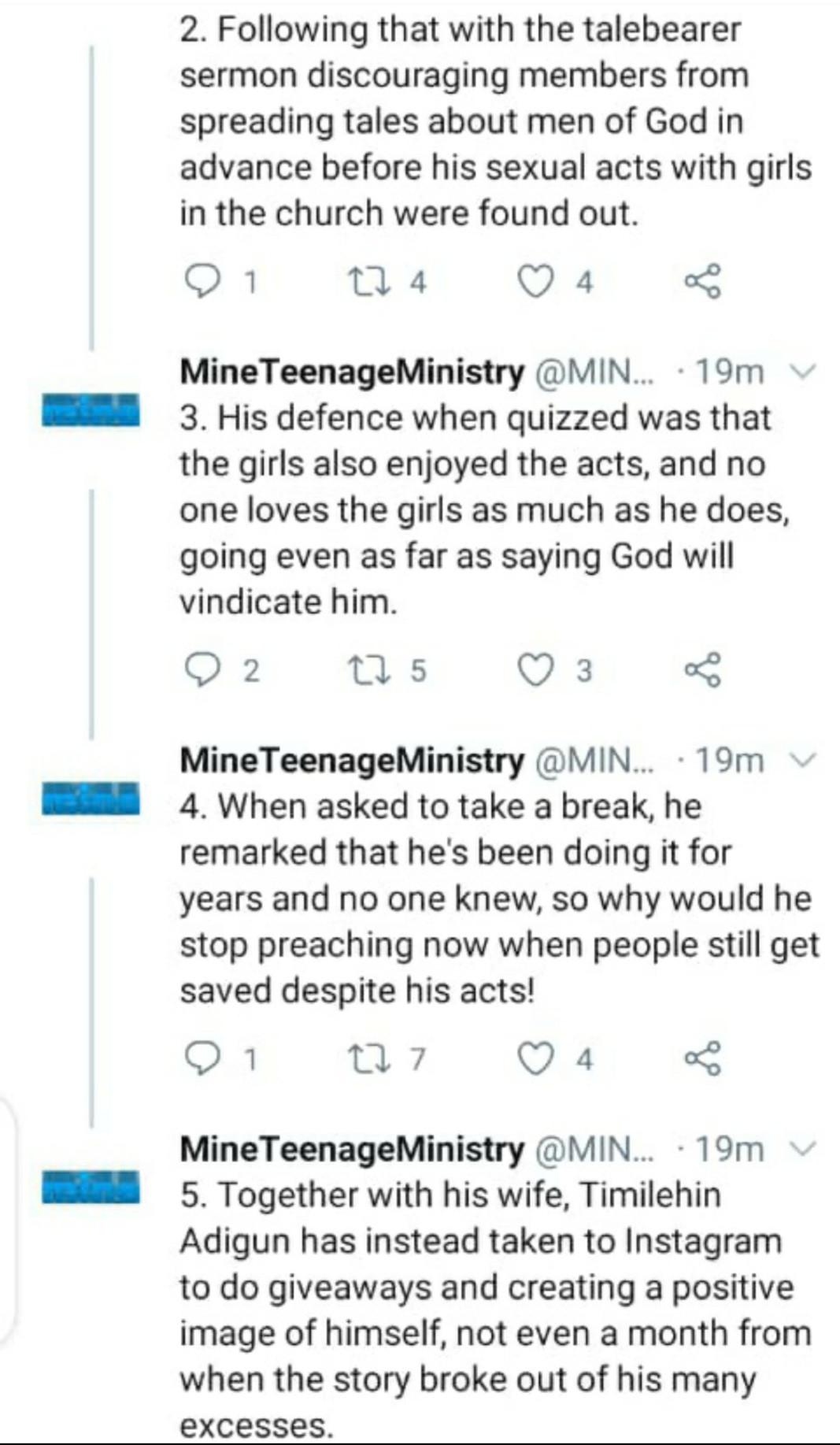 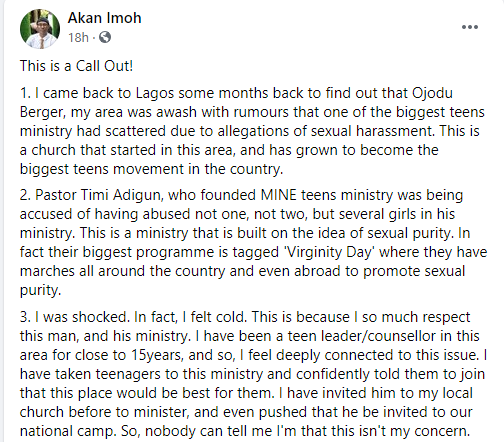