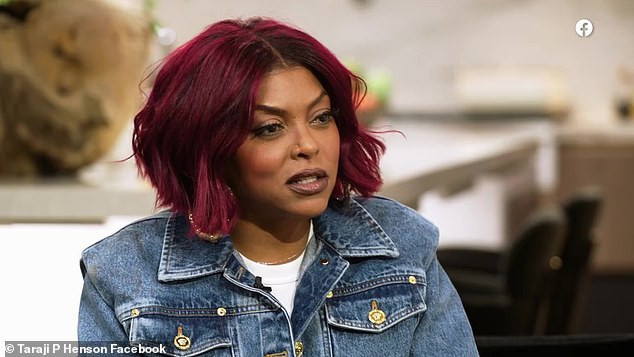 Hollywood actress, Taraji P. Henson is opening up about a “dark moment” she had during the COVID-19 Pandemic.

The American superstar actress and mum-of-one who started a Foundation, named after her late father, to eradicate the stigma around mental healthcare in the African-American community, has created a safe space for stars like Tamar Braxton to open up about their mental health journeys, and now she’s doing the same.

Speaking on her Facebook Watch series, Peace of Mind with Taraji, the actress said she contemplated taking her own life while discussing mental breakdown with co-host Tracie Jade and licensed psychologist, Dr. LaShonda Green.

She detailed the “dark moment” she faced after the coronavirus pandemic left her feeling withdrawn and isolated. She recalled:

“During this pandemic, it’s been hard on all of us, and I had a moment. I had a dark moment. I was in a dark place. For a couple of days, I couldn’t get out of the bed, I didn’t care. That’s not me. Then, I started having thoughts about ending it. It happened two nights in a row.”

READ ALSO: See Why Hollywood Actress And Mum, Taraji P. Henson, Wants Schools To Include Mental Healthcare In Their Curriculum

Prior to this, the 50-year-old diva said she had purchased a gun. The actress remembered thinking to herself, “I could go in there right now and just end it all, ’cause I want it to be over.”

When her 26-year-old son, Marcell Johnson, crossed her mind, Taraji told herself he’d “get over it” because he’s an adult.

After Taraji said she began “withdrawing” and stopped responding to concern loved ones who had reached out, she realized she needed to speak up about her feelings.

“Finally,” she remembered, “I’m talking to one of my girlfriends and I knew, I was smart enough to say, ‘I have to say it.’ Because a part of me was ashamed. I was like, ‘I don’t want them to think I’m crazy. I don’t want them to obsess over me or think they gotta come and sit on me.'”

“So one day I just blurted it out to my girlfriend. She called me in the morning and I was like, ‘You know I thought about killing myself last night. Oh my god, I feel so much better. I’m not gonna do it now.'”

“…what scared me, is that I did it two nights in a row. And the thoughts kept coming. Now I started think about how. At first, it was like, I don’t want to be here. And then I started thinking about going and getting the gun.

And that’s why when I woke up the next morning, and I blurted it out. Because I felt like after a while it was going to take over me and it was going to become a plan because that’s how strong my brain is. Our thoughts… They’re that powerful.”

READ ALSO: Taraji P. Henson Gets Real On Her Struggles With Depression, Anxiety & Its Relation To Menopause

This comes a month after she opened up about the end of her engagement to former NFL star, Kelvin Hayden.