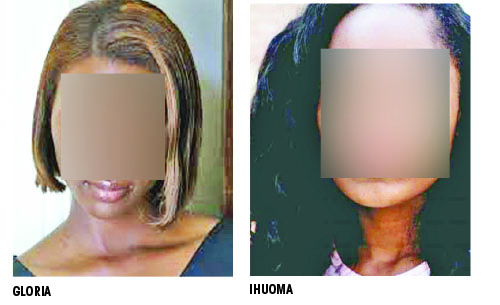 There are a lot of factors associated with single motherhood. The reasons vary. They may have been in a relationship which they left, or their partner might have passed away, or might have been raped. So, they are left to nurse or nurture their babies to teenage, adolescence, and adulthood without fathers.

It is not unusual to see their children bear their own fathers’ names or maiden family name. Some women allow this because of the peculiar circumstances surrounding the birth of their children.

One of such women is Maryam Bako. She has a 15-year-old boy who has never met his father. He doesn’t even know his name. Hence, he bears his mother’s father’s name. His mother doesn’t regret raising him alone because his father, according to her, abandoned her after he learned she was pregnant.

She told Saturday Sun that she started dating her son’s father when they were both doing the mandatory National Youth Service in Abuja. He was with FCT Development Authority while she served at a secondary school in Garki. According to her although while they were dating, they agreed to marry, she just took it for granted that it was a done deal. She narrated:

“Immediately after service, he (her lover) wanted to travel to the UK for further studies while I got a job with Zenith Bank. Things were okay between us or so I thought.”

But less than two weeks before he travelled out, she discovered that she was pregnant and told him about it. He flared up. She assumed it was the pressure on him that made him react that way and decided not to press the matter but to let him be.

But the night before he left, he softened a bit and told her that they would discuss the pregnancy issue once he is settled in the UK. But from the very day he flew out, he stopped communicating with her. Three months later, his friend visited her and told her that he had a message for her.

The message: her baby’s dad sent to say that he wasn’t a fool that she shouldn’t think of tying down with pregnancy. His friend too blamed her for getting pregnant for him without proper solemnization or mutual agreement. She said:

“I felt like a fool. My salaries of about seven months were used to buy his ticket. I couldn’t tell anyone, not even my best friends, or my mum, because I know my mum. So, I decided to keep the child and raise him as mine alone. He is 15-years now.”

She noted that even though some ladies find it hard to raise their children alone due to societal stigma and hostility, the decision to do so was easy for her because none of her family members met her fiancé’s father. The good thing was that they never asked or pressurized her about marriage although she had told her mum that he was her fiancé but travelled out and she had not heard from him.

Raising her son without his father was challenging, she confessed. Right from when he was a kid, he kept asking after his father and she kept telling him that his father travelled out. But because he rejected the pregnancy, she decided to give her boy her father’s name, which is Bako. She discovered recently that her son assumed that was his real father’s name. She said:

“I do not plan to tell him, I mean my son, anything any further. After all, there are kids who were born after the death of their fathers. People around me and my relatives talk about it behind my back, but what do I care? After about five years, my mum stopped asking me about the father of the child.”

Bako is not sure about getting married. She doesn’t think it is worth the stress but she is in a relationship. She has always been in a relationship and recently, she has been thinking about having a second child which she will also raise by herself. She added:

“I just hope that the child will be a girl and I will still give her my father’s name. The man won’t object because the paternity is not negotiable since I am not married to him. Society can say what they like. If you pay too much attention to what society have to say, you will live a miserable life. I have my life to live.”

SEE ALSO: SA Single Moms Narrate Heart Wrenching Stories About How They Told Their Baby Daddies About Their Pregnancies & Their Heartbreaking Responses

Like Bako, Gloria Asika, at 30, is also a single mother. She has a 5-year-old daughter who means the world to her. Her daughter attends a good school in Okota area of Lagos, eats well and has the latest clothes and shoes like her mates. But one thing she misses in her life is a father figure. She constantly asks her mother where her father is.

“I feel bad for her anytime she comes home from school to talk about how her classmates’ fathers bring them to school and pick them up after school. I hug her and remind her that her father died before she was born. This is a lie by the way.”

She revealed that her daughter’s father lied to her by trying to trick her into becoming a second wife. She said that they dated for one year during which she didn’t know he was married and that his wife was having fertility issues. He kept pressing her to get pregnant so that he can marry her.

According to her, they met while she was working in Lagos Island. He was one of her clients on her job and one thing led to another and they started dating. They went out regularly and even traveled for work twice. But all that while she didn’t know she was dealing with another woman’s husband. Askia recalled:

“When I got pregnant, he became very happy. He told me that I have made him a real man. That was when he confessed that he had been married for three years without children and that since I was pregnant he would come and pay my bride price so that I would become his second wife.”

On hearing that, Askia said she felt used and confused. She knew deep within her that she wasn’t prepared to be a second wife to any man, so she rejected his marriage offer.

He got angry and told her that if they don’t get married, he won’t take responsibility for their child. It has been five years now and true to his words he has never dropped money for their daughter’s upkeep. I have a well paying job,” she said.

“I drive a nice car. I live in a decent apartment in a good neighborhood and can take care of myself and my daughter. I don’t need to be a man’s second wife to care for my own child.”

But the story of Folake Lawal is a pathetic one. At 22, she was raped by one of her childhood friends and became pregnant from the illicit act. The lady who said that aborting the pregnancy was against her faith decided to keep it.

She insists that the guy who raped her took advantage of her naivety and trust for him. He invited her for his birthday party 10 years ago and spiked her drink. He raped her many times before daybreak and threatened to kill her if she told anyone about it. She said:

“I lied to my parents that my boyfriend absconded when he discovered I was pregnant. It’s the same thing I tell my daughter anytime she asks why her father doesn’t live with us. How can I tell her that she came into existence as a result of a rape?”

For years, Lawal said she has lived with the constant pain and shame of that fateful night whenever she watches her daughter laughing and playing about in her usual carefree manner. She gets sad for lying to her about her father but she is determined to protect her from the truth about her conception.

Whenever people ask her about the whereabouts of her daughter’s father, she changes the subject quickly and informs them that she can take care of her daughter all by herself. It hasn’t been easy but she’s determined to keep things that way until her daughter is old enough to understand her story.

SEE ALSO: Stigmatisation Of Single Motherhood: Psychiatrist Reaches Out To Single Parents With A Message Of Hope

Like others, 35-year-old Ihuoma Onyekachi’s life had been a rollercoaster ride of the good, the bad and the ugly. The businesswoman is raising twin boys alone because their father denied responsibility for her pregnancy.

She gave birth to them seven years ago and it hasn’t been easy taking care of them without their father’s financial and emotional inputs. She reveals that she feels bad whenever one of them gets sick and asks for their father. Their persistent question about why they don’t live with their father like other children do, sometimes makes her want to cry, she revealed.

“I feel bad for them. I haven’t been able to let them know that their father doesn’t want them. On what happened, she said: “We dated for almost a year before I found out that I was pregnant. When I informed him, he called me a liar and claimed I was busy sleeping around with my clients and wanted to hang another man’s pregnancy on him because he was rich.”

When she insisted that they could go for a paternity test after she gives birth, he refused to talk to her. He eventually broke up with her and told her to do whatever she wanted with her pregnancy. She hasn’t seen him since then, she said. Her children’s welfare has solely been her responsibility from day one.