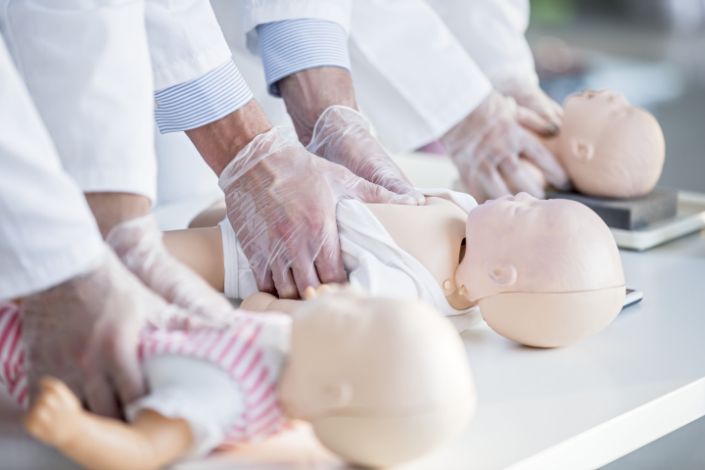 CPR or Cardiopulmonary Resuscitation – is an emergency lifesaving procedure performed when the heart stops beating. Immediate CPR can double or triple chances of survival after cardiac arrest.

A news anchor’s family health scare has prompted him to issue a heartfelt plea for parents to learn how to perform CPR on their infants and children.

The evening news anchor for CBS affiliate KOLN-TV in Lincoln, Neb., Bill Schammert choked up during his broadcast on Monday evening after returning to the news desk following his newborn son’s hospitalization.

As an emotional Schammert relayed to viewers, on Jan. 5, his younger son, 13-day-old Cameron, appeared unwell, later turning purple and “gasping for air” as his father loaded him into his car seat.

Though Schammert and his wife, Kym, had received infant CPR training as part of their prenatal classes a couple of months prior to the 2018 birth of firstborn son Theo, he tells Yahoo Life that he went into panic mode as he and Kym frantically called 911 for help.

“Especially when it’s your own child — you’re panicked and confused and you don’t know what to do,” Schammert says.

Fortunately, a 911 dispatcher — whom Schammert hailed as a “hero” in his now-viral broadcast — was able to “walk us through everything” as both he and Kym performed CPR on their son. She also sent over paramedics, who arrived shortly after Cameron started crying, a sign that the infant had regained his breath.

Cameron spent the next 36 hours in the hospital, where a chest X-ray revealed an unknown viral infection in his lungs.

SEE ALSO: How To Perform CPR On A Child- Survival Skills

“[Doctors] believe he had mucus that clogged his airway, and at 13 days old he didn’t know how to expel, so he stopped breathing,” Schammert says, adding that Cameron is currently “doing great. He’s a healthy, normal baby boy right now.”

While the Schammerts were able to avoid a tragic loss, the newsman says the incident highlighted the importance of learning infant and child CPR.

He and Kym received their own refresher course while in the hospital with Cameron last week, watching videos and speaking to a nurse about what to do in the event of another scare.

“I would encourage everybody — every parent, grandparent, guardian — if they haven’t taken a CPR class, to do it, and if they have taken one, and it’s been more than a year, it doesn’t take too long to brush up,”

He adds that he and his wife plan to meet with the dispatcher who helped them save Cameron’s life. He says:

“911 operators are truly the first line of defense. They’re our first first responders, and they’re so underappreciated, and they shouldn’t be.”

He’s also combing through the comments that have flooded in from his broadcast, many of them from other parents who shared their own frightening experiences.

“The comments, and the messages, and the outpouring of support is beyond anything we ever could imagine, and I’ve read every single one of them on Facebook, and on Twitter,” he says.

“When you go through something like this with your own child it can feel isolating and like no one understands what you’re going through, when in fact this has let me know the exact opposite. There’s so many people that know exactly what we’re going through, and people that may have lost their child that are just so gracious that ours survived, that are sharing their stories of survival and the impact CPR has made on their lives, and that is overwhelming.

“The whole point of this is to let people know: This little thing, CPR, the 10-minute class you get at work once a year, or the thing you learn for 30 minutes before you have a baby, don’t brush it off, because you never know when you’re going to need to know it, and it can truly — we’re proof — save lives.”

Dr. David Markenson, chief medical officer for American Red Cross Training Services, agrees that it’s crucial for caregivers to know how to administer first aid and perform CPR, saying, “in what could be a tragic situation, you can save a life if you’re trained.”

It’s also important for that training to be specific to infants and children, he adds.

“Because children’s bodies and the way they work — especially infants — are different from adults, you need to know how to help them, and the technique for CPR and some first aid steps are very different for an infant and a child,” he said.

“So while it’s good to know what to do for adults, for children and infants you have to have special training on their CPR and their first aid.

“Some of the differences that are important are where you put your hands on the chest [to do CPR] when a child isn’t breathing and isn’t responding,”

“In an infant, it’s right between the nipple line, and you do want to press hard and fast, but the depth of pressing is less in an infant than in adults, about an inch and a half. If you’re untrained, the best thing to do is to press between the nipple line about an inch and a half as fast as you can, up and down, up and down.”

While he stresses that “the best thing to do is to get trained,” relying on “the three Cs” can also be life-saving in a pinch.

ALSO SEE: How To Help A Suffocating Baby and When To Apply a CPR

“Check and figure out what’s going on. Call 911 next, and then provide care as you’re trained. All steps are important and easy to remember, but we really, really stress calling 911 early … that dispatcher will not only get help to you, but can talk you over the phone through what to do.”

He also advises using the speaker phone feature to keep the hands free for compressions while a dispatcher guides you through the process; the Red Cross’s First Aid app, he notes, will provide instruction and connect users to a 911 dispatcher over speaker phone.

Markenson stresses the value of getting training in an in-person, hands-on classes — which he assures are safe and “perfectly clean” during the pandemic thanks to social distancing and the use of single-person equipment — but online training is also available through the American Red Cross. He says:

“While it is a rare event to need to do CPR or first aid for an infant or a child, it can occur.

“And if you don’t know what to do, the outcome can be, of course, horrific … In the heat of an emergency, the fear of not knowing what to do is the biggest barrier. The training allows you to do something.”