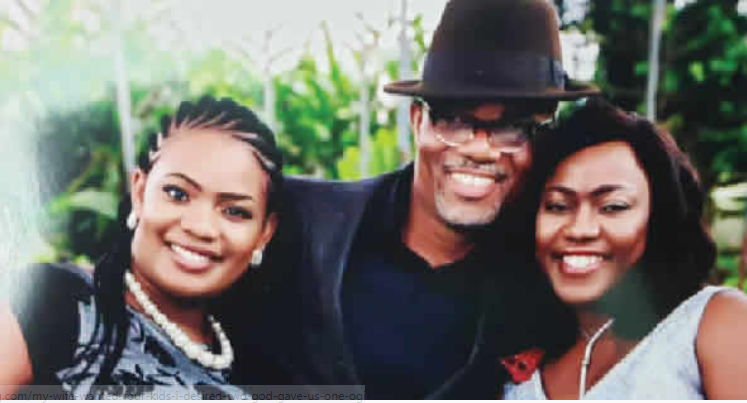 Edosa Ogiugo is the first president of the Guild of Professional Fine Artists of Nigeria. He was in office between 2008 and 2012.

In an interview with PUNCH, the proud dad-of-one, narrated his experience of becoming a father, how fatherhood evolved for him after two decades and how he faced stigmatisation from society and family from having only a girl child.

When did you become a father?

Sometimes, we situate it when we begin to have children. But I think it is much earlier than that. When you gain the consciousness of what your responsibilities should be towards your wife and you start to dream of the kind of woman.

Of course, your responsibilities towards raising a useful entity that will also give to humanity. That’s when I think fatherhood starts because if you situate it at the point of giving birth, then you’ve missed it. No, it may not be perfect. If you put that side by side with leadership today, you then can put a finger on where the challenge is.

A lot of people who find themselves in leadership never prepared for it. They never had a holistic view of what leadership is. That is why they go there to steal. In the same way, as a father, you will lead a life of discipleship. You must be willing to sacrifice and compromise at some point.

You must be willing to give direction. Sometimes, you are just there to watch while you allow the subjects within your domain manifest their God-given abilities.

What do you remember about the day your wife was delivered of your daughter?

It was marvellous. That was on May 2, 1994. It started about three days earlier. My wife was writing her final exam at the Yaba College of Technology at the time and we were living in Ipaja. We didn’t have a car. I just told her, ‘Two days to the estimated date of delivery, you would have to take a room in the hospital.’ The hospital, Logos, was at Ojuelegba.

My wife was a secretary while schooling. Usually, we would join a bus to Ojuelegba and just take a walk into the hospital. On that particular day, I had to leave in the morning for school and then left Ipaja quickly in the afternoon to go and stay with her because the plan was that I would sleep over at the hospital. When it was about midnight, the midwife said she should start taking a walk round.

So, we were walking round the hospital. At about 3am or so, unfortunately, I didn’t realise we would need a bottle of olive oil for the baby, so we had to go searching in the night for where to buy olive oil. To cut a long story short, at about 5am, she was already in the labour room.

Between 5am and 5.30am, the clouds opened up and a massive rain started. That ushered in Precious (my daughter) really. I can’t forget. The whole of Ojuelegba was flooded, even up to the entrance of Logos Hospital.

But I ran out of the labour room for a moment because I couldn’t withstand the sight of blood, even though I was the one praying and encouraging her all along. I ran out for about one and a half or two minutes and came back. And Precious was out there. It was a great feeling.

There were no phones then, so I left a message at the church then and went to the parents in Ojo. I just took a bus from Ojuelegba about 7am. From Ojuelegba, I stopped at Orile, then Mile 2 and Ojo/Alaba to break the news to them. I went round like that.

From there, I went from Iyana Oba to Iyana Ipaja where we were living to break the news to the house fellowship and neighbours. So, it was a great day. My adrenaline was up. I had my siesta and went back to the hospital with all the required stuff.  We already knew we would call her Precious, anyway, because we had waited two or three years.

Did you and your wife make a deliberate choice to have one child?

No, it weren’t at all. We even attempted invitro fertilisation at some point, but nothing happened. I just told my wife, ‘Look, let’s forget about this thing.’ We stopped trying over 12 years ago, although at some point, I philosophised; I told my wife, ‘We really never agreed on what number we wanted.’

I wanted two and she wanted four, and that became a point of disagreement. But I’m happy we have many non-biological sons and daughters.

SEE ALSO: Despised For Having Five Girls & No Son: How Macauley & Ima Etuk Weathered The Storms In Their Marital Journey Of 48 Years Together

Have you faced any stigmatisation from society or family from having only a girl child?

I’ve never noticed. I’ve never thought about it because I’ve always believed in the ability of women. I’ve always shared the opinion that they are unacknowledged go-getters. And maybe because of my background; I come from a very traditional home. My extended family is rooted in the Benin culture and traditions, so as rich as that tradition is, there were some practices I didn’t quite like and, I think, today, all of that is fading out.

You would have sections for the women and sections for men. And the question I used to ask my father then was, ‘These same women cook your food and you sleep with them, so why do you discriminate against them?’ He never was able to answer those questions appropriately.

So, having a girl child, the reason why we tried some more was for her to have company. But somehow, she is in the midst of friends. So, I think God has compensated her. As for stigmatisation, I have never given attention to it. Maybe also because I have not given that opportunity to friends and especially family; I know they can be very (opinionated) but I have never given that room.

Did you at any point in time have a preference for any gender?

No. In fact, if I had a boy (as a second child), Precious would have been the person who would inherit the best of my (inheritance). In my culture they would say your first house, for instance, would go to your first son. Whether that male child has seven sisters ahead is inconsequential.

In my case, if I had Precious and six sons (after), Precious would have still owned our first house. I would have convinced my wife. That would have been against the norm. I would have always considered her as my first fruit and she would have the right to the best because she’s the first.

Civil Engineer, Adewale Adelodun Appreciates His Super Mum As He Reminisces On The Huge Sacrifices She Made To Make Sure He’s Educated

How did you prepare for fatherhood?

It’s a difficult one but my dream has always been to just live a comfortable life. As such, especially coming from my kind of very humble background, I knew that I needed to work hard; I needed to also marry a woman that would complement me and, thankfully, according to scriptures, ‘he that finds a wife, finds a good thing.’ That was my heart’s desire, but I can tell you that, as much as I desired to give the best to my family, I really never knew how it was going to happen. I only just knew that, if I did the best, I would attract the best.

But, to the extent that we have gone now, I am amazed. Only God can be praised for that. I didn’t expect it to go this way but I just desired the best. As things unfolded, I kept stretching it and once I shared it with my wife, she bought into it. Maybe the only person that was a bit marginalised would be Precious because, once we just said, ‘We desire that you do your further studies abroad,’ she probably liked it.

I have never really sat down with her to ask those questions. Would she have preferred to have had her further education in Nigeria? Or would she have just said 100 per cent yes to our desire to have her school abroad? Outside of that, there was no rigid plan. It was the big dream, always, and trusting God to prosper the work of one’s hands.

As the husband of a working-class woman, what kinds of compromises have you and your wife had to make on the home front?

That is plenty. It can be challenging, especially that you face separation for a couple of months, spread across time. That was challenging but I think we were able to bridge that by having to spend time together, sometimes, travelling with her on some trips.

Since I don’t really go out, I work from where I live, so it was a bit easy. I had to learn how to cook by myself or just revive the old methods I learnt from my mum, because she had just three boys for my father. So, at an early age, I think I was in Primary 2 when I learnt how to cook. And the cooking method is not the ones your ‘ajebutter’ do.

It was by firewood and mud stove. We used grinding stones for the pepper. When I ground that ata rodo (scotch bonnet) with the stone, I didn’t know what I was doing, but by the time I finished, there was a white chalk solution waiting for me to dip my hands in. I couldn’t sleep that night. Both hands were literarily on fire.

How has your role as a father evolved now that your daughter is an adult?

I think there was a bit of a crisis. She had to remind me at some point that she was already an adult. Like they say, I learnt how to stay in my lane, especially as a man. So, I have given a gap to allow the mother more interaction, while I just watch. We are like pals. We chat like pals.

We’re best friends and something I realised a bit late is that I was just still thinking she was that baby I took to school, and visited on open day and visiting days. When we go on vacation sometimes and stand side by side, I just wonder; she’s as tall as me — very huge. That tells me ‘this is a woman I am talking with.’ I just see a handing over of a baton; that’s the life cycle really.

So, what I just do now is to thank God. I told my wife the other day that it’s about thinking about how to get more involved in the community and whatever project she is willing to involve us in, if that’s her desire, and just enjoy fellowship in my studio. Thank God I have a life that also transcends the physical, as an artist.