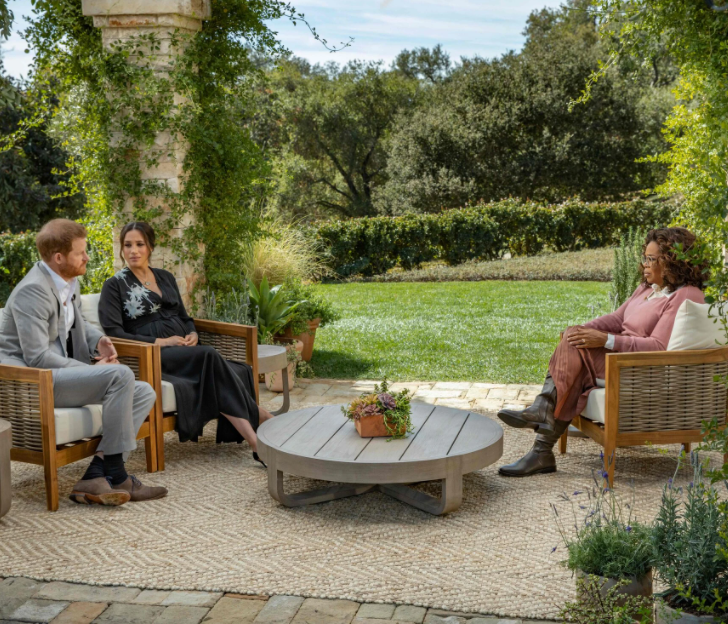 Meghan Markle, in a bombshell interview with Oprah Winfrey said she contemplated suicide while in the royal family and she had asked officials at Buckingham Palace for medical help but was told it would damage the institution. Meghan said of her suicidal thoughts:

“I was ashamed to have to admit it to Harry. I knew that if I didn’t say it, I would do it.”

Meghan admitted to Oprah that she would have committed suicide and since the royal family won’t help her, she turned to a friend of Princess Diana‘s for help.

She said she struggled with her mental health due to the intense pressures of being in the Royal Family, and that she had suicidal thoughts. She said:

“I just didn’t want to be alive any more. And that was a very clear and real and frightening constant thought. And I remember, I remember how [Harry] just cradled me and I was… I went to the institution, and I said that I needed to go somewhere to get help.

I said that I’ve never felt this way before and I need to go somewhere. And I was told that I couldn’t, that it wouldn’t be good for the institution.”

READ ALSO: The First Look At Prince Harry And Meghan Markle’s Interview With Oprah Winfrey Is Here & It’s… A Lot

She said Harry was there for her and constantly held her tightly whenever they were in the public to reassure her.

Meghan also revealed she is “haunted” by a photograph of herself at a red carpet event at the Royal Albert Hall in January 2019, which the couple attended just after she had the conversation with Harry.

“A friend said, ‘I know you don’t look at pictures, but oh my god, you guys look so great’, and sent it to me,” the duchess said.

“I zoomed in and what I saw was the truth of what that moment was, because right before we had to leave for that, I had just had that conversation with Harry that morning.”

Meghan said Harry suggested she did not attend the event, but that she did not want to be left alone.

“And we went. And that picture, if you zoom in, what I see is how tightly his knuckles are gripped around me. You can see the whites of our knuckles because we are smiling and doing our job, but we are both just trying to hold on.

“Every time those lights went down in that royal box, I was just weeping.

“[Harry] was gripping my hand and it was, ‘Okay an intermission’s coming, the lights are about to come on, everyone’s looking at us again’ … and you had to just be ‘on’ again.

“You have no idea what’s going on for someone behind closed doors. You’ve no idea. Even the people that smile the biggest smiles and shine the brightest lights, it seems.”