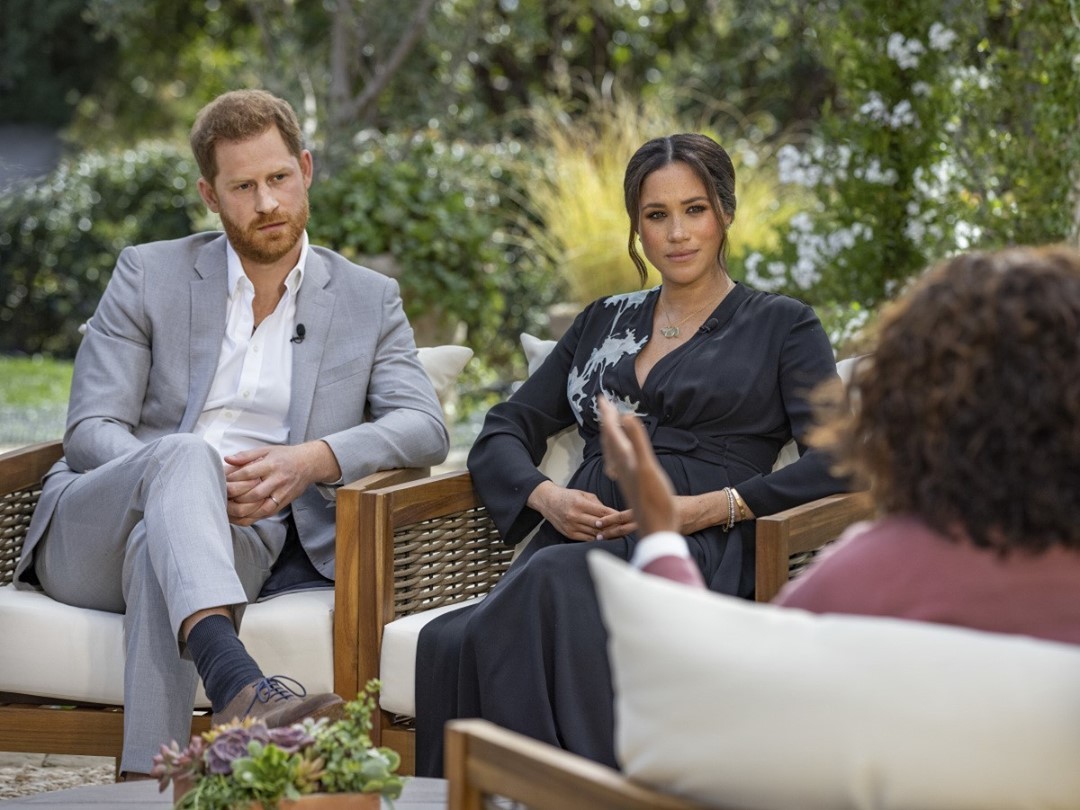 The Duke and Duchess of Sussex, Prince Harry and Meghan Markle had an explosive interview with World-famous media mogul, Oprah Winfrey where the couple opened up about their decision to leave the royal family and dealing with the British media.

The interview is the couple’s first public engagement since Buckingham Palace, Prince Harry and Meghan Markle released statements confirming that they will not be taking back their roles as working royals.

The tell-all chat was aired on CBS to US viewers yesterday, and many shocking claims came to light.

It began with Oprah and Meghan who couldn’t conceal how liberated she feels.

Meghan stated while Harry joined the conversation much later.

The couple who are expecting their second child, a girl, revealed that their 2018 Australian tour was the turning point that led to their current relationship with the Royal Family and so many other things from the gender of their baby to the allegations that Meghan made her sister-in-law, Duchess Catherine of Cambridge cry.

Here are the 10 most shocking revelations made during the CBS prime-time special “Oprah with Meghan and Harry”.

Three days before their Royal Wedding on May 19 2018, Harry and Meghan secretly tied the knot in their back garden. Meghan told Oprah:

“Three days before our wedding we got married. The vows were framed. We called the Archbishop, and we just said, ‘Look, this thing, this spectacle is for the world, but we want our union between us’.”

The couple told Oprah how the ceremony was just the two of them, and the Archbishop of Canterbury.

Meghan disclosed that the Royal Family had concerns about their son Archie, from how he would not be given a title or security to an undisclosed member of the royal family speaking with Harry about how dark their son’s skin might be and “what that would mean or look like”.

“They were saying they didn’t want him to be a prince or princess (not knowing what the gender would be) which would be different from protocol and that he wasn’t going to receive security,”

On a lighter note, Harry and Meghan took the opportunity to share some happy news. The couple revealed they are expecting a baby girl, meaning Archie will have a little sister.

Meghan said that the baby is due in the summer.

Meghan also revealed that she wasn’t protected from the press by the Royal Family, even though they were willing to lie to protect other members of the family. In her words:

”Then I came to understand that not only was I not being protected but that they were willing to lie to protect other members of the family but they weren’t willing to tell the truth to protect me and my husband.”

Meghan made a big reveal about struggling with mental health and having suicidal thoughts at some point before she and Prince Harry left the Royal Family.

“But I knew that if I didn’t say it, that I would do it. And I just didn’t want to be alive anymore and that was a very real and clear and frightening and constant thought,”

Meghan was open and honest about her hidden struggles as part of the Royal Family. The TV actress also said the media scrutiny had affected her mental health.

Meghan also claimed that she had spoken with a senior member of the Royal institution about wanting to seek help.

But according to her she was told not to because it would reflect badly on the Royal Family.

“I’ve never blindsided my grandmother. I have too much respect for her.”

7. Trapped in the Family

Harry also admitted that he wouldn’t have considered leaving the Royal Family and didn’t see a way out until he met Meghan in 2016.

The Duke of Sussex revealed that his father, the Prince of Wales, stopped taking his calls. Harry explained that he had three conversations with his grandmother and two with his father “before he stopped taking my calls”.

The prince believed his father stopped communicating with him because he “took matters into my own hands”.

“My father and my brother, they are trapped. They don’t get to leave and I have huge compassion for that,” Harry said.

Harry also revealed that he had been cut off from the Family’s finance and that he and Meghan were supported by funds let by his late mother Princess Diana who he said would be “angry and sad” at the turnout of events, “but I think all she would ever want would be for us to be happy”.

Meghan finally responded to the allegations that she made the Duchess of Cambridge, Catherine cry. Instead, it was the other way round and her sister-in-law had made her cry during her wedding preparation concerning flower girl dresses. Meghan revealed that Catherine later brought flowers and apologised.

At the end of the interview, Meghan didn’t forget to recognize her husband’s effort in their hard decision. She said, “I think he saved all of us, he ultimately called it. He certainly made a decision that saved my life, and saved all of us.”

SEE ALSO: Duchess of Sussex, Meghan Markle Did Not Have The Type Of Birth She Planned For According To Reports

Oprah asked Meghan whether she was “silent or silenced” during her time as a working Royal. Meghan responded:

“The latter”, saying that she’s “always valued independence” and that being quiet about her life was difficult

After Harry and Meghan’s relationship became pubic knowledge, she was given very clear instructions to always say “no comment”.

She claimed her own family members and friends were told to do the same.