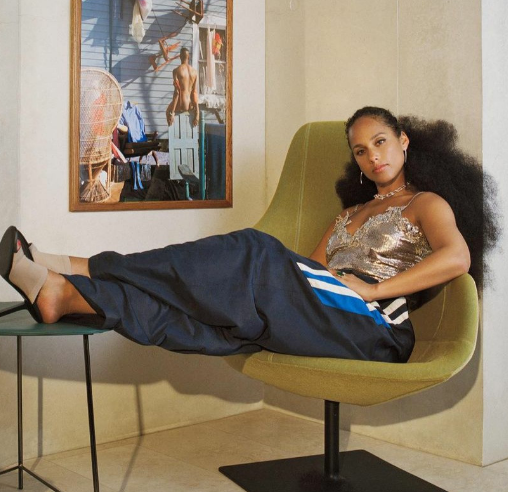 Former Side Chic, Who Claimed She Could Get Any Married Man She Wanted, Tips Women On What To Do To Stop Their Husbands From Cheating

Award-winning American singer and songwriter, Alicia Keys, recently took to social media to show us that she is human with flaws and insecurities.

The mom-of-two shared snippets of her conversation in an interview with Allure magazine on her official Twitter page.

The talented singer started by revealing that she used to be uncomfortable in her skin, and for every opinion she had, she had to run it by other people for validation. She continued by stating that things have changed as she no longer needs approval from people and it is a feeling that she loves.

”I’ve never felt comfortable in my skin. I’ve never felt like I can depend on myself without having to check with 30 other people to make sure that my opinion is valid.

But now I do, I like the way that I feel right now, and it took quite a while to get to this place. ??
??
It’s a process… eventually you get there. Be proud of your journey even with all the insecurity… we’re getting closer to ourselves.”

SEE ALSO: ‘I was supposed to end up a prostitute’ -Celebrity Mom, Alicia Keys Reflects On Her Tough Background & Beating The Odds

The 40-year-old singer also opened up about her two children with husband Swizz Beatz in the stunning new cover story for Allure magazine.

‘I have two Capricorns, my sons, and both of them are the most emotional people I’ve ever met,’

she said about her sons Egypt, 10, and Genesis, six.

”I try to wake up at 5:30. I want some things before the day goes away and then I can never get it back. I love to do my meditation early and usually piggyback that with a workout,”

she says about her early starts.

she added about the struggle of getting her sons ready for school on time.

Elsewhere in the issue, the Falling performer highlighted her natural beauty with close-up shots of her striking face and incredible curls.

For Keys, beauty is about self-care.

”I don’t want to sell people stuff… I want to share whatever it is that’s helped me become more centered. I like the way that I feel right now, and it took quite a while to get to this place,”

she added in her interview with the publication.

She explained she is more concerned about the state of her soul than her skin:

”Make sure your oxygen is good — that is the theme of this year for me. It brings us back to this idea of filling yourself up.”

”Once your soul is cared for, you become everything you need to be. And you can spread that as far and wide as you want to,”

The mother credited her sons with helping to change her thoughts about ‘caring for herself’ in a February interview with The Telegraph.

Alicia said having to care for her sons completely was ‘humbling but empowering’ as she had even found remembering to drink enough water while pregnant a ‘new concept’.