Former presidential aide and dad-of-three, Reno Omokri has taken to his Instagram handle to share another of his many nuggets on marriage.

On the latest episode of RenosNuggets, the preacher told men that spending money on a woman they are not related or married to just because they are in a relationship is not generosity but foolishness.

The author further stated that it is not proper for a man to even give gifts to a woman he isn’t married to. According to him, it is stupid to buy expensive gifts for a girlfriend.

”A foolish man asked me if it is right to take back gifts you gave to your ex. I said he is asking the wrong question. The right question is, should you give expensive gifts to a woman you are neither married or relate yes to? No. Who appointed you as Santa Claus? Prevention is better than cure.

Don’t do it! There is nothing wrong in buying your wife even a diamond studded phone. But why be so stupid as to buy a girlfriend a phone? Phone that she will use to call her new boyfriend if she dumps you? And if you have the audacity to complain, she can even block you with the phone you bought. Be wise, not nice!”

Responding to the comment, Reno said he isn’t stingy and went on to state why men who give money to women they are dating are ”stupid.”

According to him, many African men settle for older white women because those women don’t require financial maintenance. He shared:

Those who call me chairman of Stingy Men Association don’t understand the meaning of stinginess. Please research. I gave out ?2.3 million as palliatives during the #COVID19 lockdown.

Spending on women you are neither married or related to, just because you are dating them, is not generosity. It is stupidity.

Actress, Eucharia Anunobi Writes To The Singles On Why They Shouldn’t Settle For A Boring Person

SEE ALSO: Author & Dad, Reno Omokri Warns Singles Who Don’t Want To Be In Bad Marriages To Take This Precaution

Why should men give a woman money? Where do you see it in Scripture? Entitlement has totally messed up your mentality. If a man wants to be generous, he spends on the poor, not on women who have high maintenance cost as well as high nuisance value to you.

This is the main reason too many young Black African men are marrying older White women. Because they are pleasantly surprised that there are women who don’t require financial maintenance.

Our women must stop being feminist that still want men’s monies!

That is not feminism. That is moneyism!” 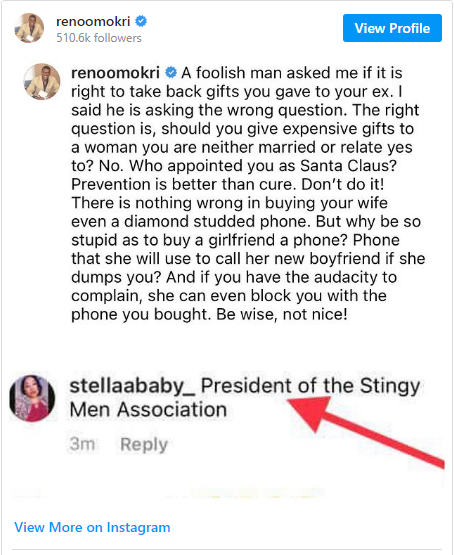 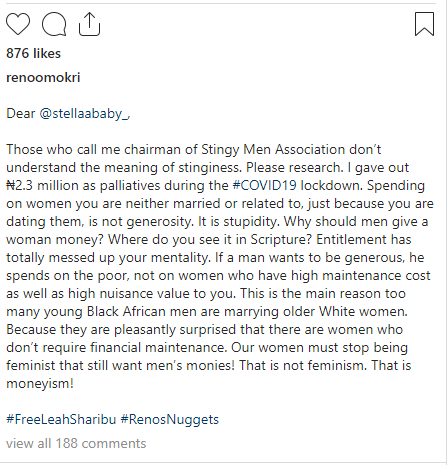