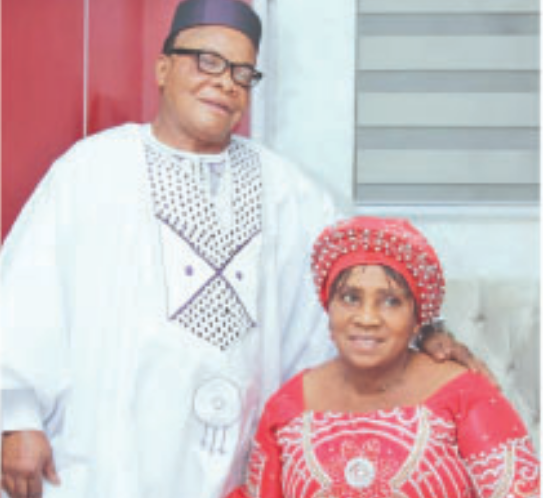 When Elder Nwosu who is currently residing in Aba, Abia State, noted that the only way couples could hope to have a long-lasting marriage is by putting their faith in God and by maintaining mutual trust in each other, he was speaking from experience.

Soon, rumour started flying that his young wife must be the brains behind the serial tragedies that continued to befall the family. Some people saw her as a ‘marine spirit,’ in an unprecedented case of religious stereotyping.

Yet others saw her as a mermaid spirit in human flesh, who had come to ruin the man’s life and destiny. But solid faith in God and perseverance eventually prevailed and sustained their union to date.

The couple, in a chat with DailySun, in Aba, on how they met and on the frills and thrills of their early days in marriage. They also provided some pieces of marital advice for intending and newly married couples.

Could you tell us the secret of your long-lasting marriage? How did you meet each other before being joined in holy matrimony?

Elder Philip: We met in Gombe, then in Bauchi State, in 1979. We met at the Assemblies of God Church where her parents worshipped.  I was also a member of the church. Her late father, Mr. Godwin Alaribe, from Aboh Mbaise, was a locomotive engine (train) driver in Gombe, and she usually came on holidays during her secondary school days at Amumara Girls Secondary School, in Mbaise. One day, I saw her and invited her to my house along with my sister, Josephine (now Rev Mrs. Gift Chidi), who was her friend. It was there that I proposed to her.

Madam Felicia:  I came on holidays after writing my WAEC final year examination and he invited us to his house where he told me that he would like to marry me.

Was it a love-at-first-sight kind of meeting, or did you know each other before that day?

Elder Philip: I had known her parents and seen her a couple of times when she came on holidays. But she would later go back to Mbaise. When I invited her, the exact words I used were: ‘Sister, this is something inevitable. I want to marry you.’ However, she did not immediately respond to my proposal, so, I had to wait.

Madam Felicia:  The reason I did not respond to his proposal immediately was because I wanted to take time to pray and seek God’s direction to know if he was the right choice for me or not. The answer I got was positive, so, I responded thus: ‘What you proposed, I have accepted.’

Was there any opposition from any person or relative against the marriage?

Elder Philip: No, there was none. One other thing that I did was to tell my pastor then, Rev Illya Damina (now late). He asked if I was sure and if I could make it, I said, by the grace of God, I would.

Madam Felicia:  Nobody from my side disagreed with our marriage. So, with every needed traditional engagement done, we proceeded to wed on May 12, 1979, in Gombe.

As you began married life together, did you encounter any problem or challenge?  If yes, what were they and how were you able to overcome?

Elder Philip: Our problems started barely 24 hours after our wedding as we underwent a series of setbacks. Before then, I had been a successful transporter and wholesale food materials dealer. But, within six months, I lost almost all that I started life with and became sustained over the years. My Honda 185 motorcycle was stolen a day after our wedding. Some days after, a new car I bought for the wedding got damaged by a trailer-truck, whose driver complained of brake failure.

One week later, another of my vehicles somersaulted while another one ran into a pool of water. These made my workers, including my drivers, to come to my house to ask that I send my new wife away. They accused her of being a devil’s agent sent from the waters to ruin me and my businesses. I called my younger brother, Sylvester (now late), who also lived in Gombe then.

He said the allegations were unfounded. He said that what my workers and other persons were saying against my wife, were rubbish. He added that: “How can you lose your property and also lose your new wife?”  He refused to accept that my wife had some evil powers and was plotting against me or any other person. He argued that she should not be punished for what she knew nothing about.

Madam Felicia: The allegations affected my husband and me so much.  Before our marriage, he used to be plump. But when those troubles began, he became so lean that he had to hold his trousers with a belt. When I heard that I was the cause of his troubles, I felt very sad. One of our Christian brothers even confronted me, noting that I could be responsible. He said if a man marries and begins to have unusual problems, his new wife would surely be blamed for what was happening.

But as the accusations raged, did any of you think of ditching the other, separating or getting a divorce?

Elder Philip: My decision was firm. I said I would never divorce my wife, no matter the circumstance. My pastor invited me to his house, and on getting there, he asked how I felt. My answer to him was that, “that was the world; it must surely come to pass.” He said God was my strength and prayed for me and asked me to go. All these calamities took place within six months of my getting married.

Madam Felicia: I did not think about leaving him either. Rather I was sorry and thought of how I could help him regain his normal life and business standing.  I did not marry him because of his wealth, but to live faithfully with him all through life.

Were there other problems thereafter and how did you manage them?

Elder Philip: The Word of God said there is time for everything under the sun, a time for trials, temptations, and pleasure. After that period, things started to get better. I had to change my business and went into selling motor vehicles and caterpillar spare parts.

Madam Felicia:  I began to have children and had three daughters in quick succession. Their names are Chinyere, Blessing, and Nwamaka. Our detractors started to gossip again. They said that I have come to give birth to only female children instead of males who would continue with my husband’s family line should he pass on.

I was called all sorts of names. But as God would have it, I got pregnant and gave birth to twin-boys, Promise and Princewill. The story suddenly changed.  I was now called the Beloved of God, while my husband became the “lucky man loved by God.” People that earlier condemned me began to testify of the Lord’s goodness to us.

I later had my last child, Amarachi, making them six children in all: two males and four females.  All of them are doing well in their respective homes with the women all married except Amarachi who is still schooling. She lives with her brother in Abuja. One of my male children currently lives in London and all of them, to the glory of God, are useful vessels in His vineyard in their places of abode.

All through these years and with the upsurge in divorce cases across the globe, what would you say was the binding force that made you stay together?

Elder Philip:  We understood each other and never had cause to mistrust each other. I am born again and still worship with the Assemblies of God Church, though now in Aba. After her academic education in Gombe (NCE) and Abia State University (ABSU), Uturu, where she read Educational Management/Planning, my wife attended the Assemblies of God Divinity College in Umuahia and is now an ordained pastor of the gospel of Jesus Christ.

She is faithful. She has never deceived nor told me a lie. She is very loving and indulges in the things of the Lord. When she told me that God called her into the ministry, I allowed her to go and now she is working and both of us are happy.

Madam Felicia: My husband used to be somehow aggressive sometimes, by stating the truth and standing firm on it.  He is a hard man to deal with and will always fight for the church and the oppressed. Sometimes, my children praise me for standing up to his standards. We have built our lives in confiding in each other.  He has a loving heart and does not want to be thanked or commended when he assists the needy.

What advice do you have for young couples and those planning to get married?

Elder Philip: Whatever you do, put God first. Commit your ways into His hand.  He will surely bless you.  The Bible does not approve of separation. No matter what happens, married couples should stay together and apply peace. God will sustain their marriage.

Madam Felicia: They should establish foundational truth that will unite and uphold the family. If misunderstanding arises, they should rebuild their relationship by confessing the truth and forgiving each other. If a man is angry, his wife should not respond to his words.

On one occasion, my second son, desired to have a wife like me when he noticed how I responded to his father’s tantrums.  It happens like that with men. Women should understand them. I pray before I request anything from my husband and if he says “no,” I don’t cry.

This is because he owns me and I own him. Many women refuse to sleep with their husbands because of their failure to get their requests granted. This is very wrong and should be stopped. If your man errs, tell him his mistakes sincerely without malice or quarrel. Do not defraud each other.