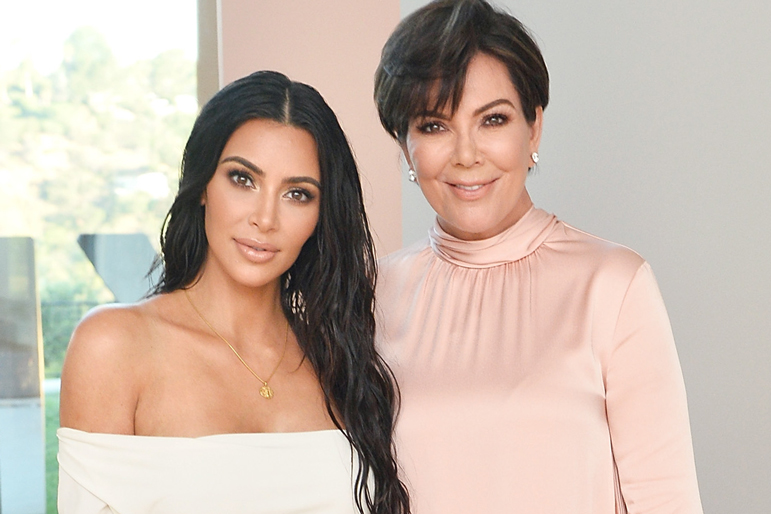 Kim Kardashian, who’s in the process of divorcing from husband, Kanye West, is lucky to have a mother in her corner—because Kris Jenner has been there, in more ways than one.

In a video conversation for the Wall Street Journal Magazine, the 65-year-old mom and grandma confirmed that her ex-spouse Caitlyn Jenner will be in the upcoming final season of Keeping Up With the Kardashians and called their current relationship “respectful.”

The American media personality, socialite, producer and manager says she learned from her childhood it was possible for divorced families to stay amicable and while she never imagined herself being in that position, she knew if she did find herself a divorced co-parent, she could make it work.

The mom-of-six was around the same age her daughter, Kim is now when she became a divorced mother of four, the same situation Kim is in.

Naturally, Kris who shared four kids with her late first husband, Robert Kardashian (daughters Kourtney, Kim, Khloé and son Rob) and two children with Caitlyn Jenner (daughters Kendall and Kylie) has motherly advice to share on how to navigate this particular challenge. She said:

During her divorce from her first husband, Kris recalls,

“I used to put everybody to bed and then I would be upset, go to my room, and cry myself to sleep. But I didn’t want to have a pity party in front of the kids.”

It sounds like her “focus on what’s important” strategy worked. Jenner shared that Robert Kardashian would come over twice a week for dinner and spend every holiday with her following their divorce.

They even talked on the phone multiple times per day. With Kris’s help, we’re sure they’ll work something out.

Meanwhile, nearly two months after Kardashian filed for divorce from the rapper following 6 1/2 years of marriage, the former couple seem intent on a drama-free split, especially when it comes to their four children: North, 7, Saint, 5, Chicago, 3, and Psalm, 1.

Kanye West’s attorney filed his response in Los Angeles Superior Court on Friday, echoing Kardashian’s request for joint physical and legal custody of the children, according to court documents obtained by People.

The filing also called for the judge to terminate the court’s ability to award spousal support and asserted that each party should pay for his or her own legal fees.

The Yeezy founder cited “irreconcilable differences” as the reason for their split, making his response “virtually identical” to Kardashian’s filing, according to the Associated Press.

The issue of their property will be determined “according to proof at time of trial or settlement.”

Given that both Kardashian and West have agreed to joint custody, they will likely work out an arrangement for co-parenting privately, E! News noted.

Kardashian filed for divorce earlier this year amid intense speculation that the high-profile couple were on the rocks following a series of public outbursts by West.

At the time, a source close to Kardashian told E! News that the split was “very amicable” and that neither West nor Kardashian planned to contest their prenup as they hammered out the details of their property settlement agreement.

SEE ALSO: Rapper/Dad-of-4, Kanye West’s Marriage To Kim Kardashian On The Verge Of Collapse Over His Mental Health Struggles

As part of the divorce, Kardashian is likely to remain in their $60 million Hidden Hills, California, compound that the couple famously overhauled to resemble a “futuristic monastery,” while West resides at his sprawling ranch in Wyoming, according to People.

The former couple have largely stayed silent on the split, though the final season of “Keeping Up With the Kardashians,” which is airing on E!, has given fans some insight into their marital troubles.

“He’s been posting a lot of things on social media, so that is a little bit frustrating,” Kardashian said in an episode last month.

She was referring to West’s Twitter outburst over the summer in which he claimed his mother-in-law, Kris Jenner, was part of “white supremacy” and that his wife was trying to involuntarily commit him to a mental health facility.

Kardashian confirmed on the show that the couple were having “issues,” but the SKIMS founder said she preferred not to discuss them on camera out of respect for her then-husband.

“It’s no secret that everyone sees things in the media about my life with Kanye, but I’ve always been really respectful in not talking about issues that Kanye and I have,” she said in a confessional. “I mean, you guys clearly see them on Twitter, but I’m going to choose to not really talk about it on here.”

West later apologized for the Twitter spree after Kardashian spoke out about the rapper’s “complicated and painful” life with bipolar disorder.