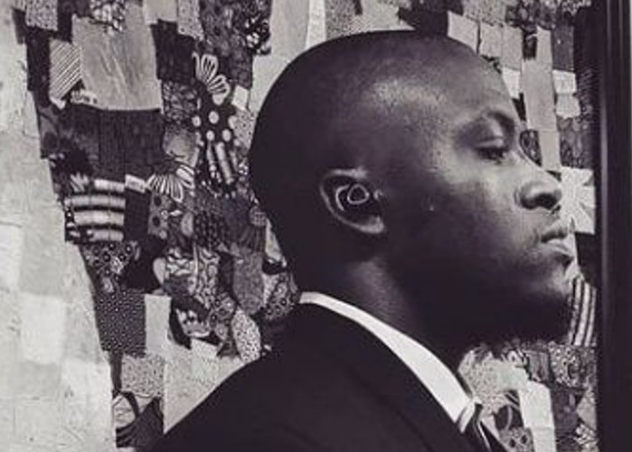 Specialist, Maclawrence Famuyiwa Educates Couples On How To Determine Sex Of Your Baby Right On Your Bed

A Nigerian man is of the opinion that until men date ladies outside the shores of Nigeria, they may never experience some things in a relationship.

The man revealed that growing up, he had this orientation that a man is supposed to be the sole provider in any relationship but his trip abroad changed his view.

Drawing from his personal experience, the man with the Twitter handle @oloye__, averred that women outside the shores of Nigeria are selfless supporters who are genuinely happy to pay for their own things.

He opined that some Nigerian women who tend to pay for their own things while in a relationship, do so because they heard it helps them get the respect they deserve from their man and not because they just want to do so.

According to him, all the ladies he dated whilst he was living abroad paid their own bills and narrated how an experience he had with a lady in Europe and compared it to his dating experience with a lady who lived in Abia State.

”Immediately I started dating outside this country, I knew she’d have to be a literal angel for me to marry a Nigerian. I saw things I hadn’t seen before. The way I was raised was to expect to be the provider in a relationship. Then you meet women who insist on paying for their own things. It didn’t make me feel less masculine.

It just made me look out for special things I could do for them that they couldn’t insist on doing for themselves.

Post 2014 after I took my no dating vow. I still made exceptions for two women. But they always have to go back to where they came from and the conversation died due to distance.

Until you have dated outside the shores of Nigeria, you may never experience some things. This isn’t to say you wouldn’t find Nigerian women who are also supporters.

I dated a girl from Abia with whom I split everything. But she didn’t do it because she liked me, she did it because according to her mum, that’s the only way to get men to respect you.

It wasn’t done freely, it was a chip on her shoulder she had from her own parent’s relationship with each other and from her own vow never to let a man have a upper hand over her and the only way she could see that happening is to not take his money.

Then you meet someone that supports and not because she’s carrying a burden. It’s more natural, less defensive. Feels more like watching a flower bloom and less like watching a butterfly stuck in a cocoon.” 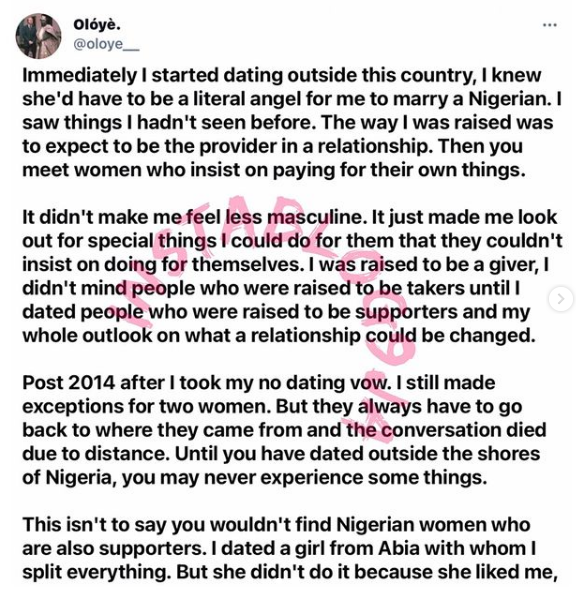 Immediately I started dating outside this country, I knew she'd have to be a literal angel for me to marry a Nigerian.

I saw things I hadn't seen before.

The way I was raised was to expect to be the provider in a relationship. Then you meet women who insist on paying for