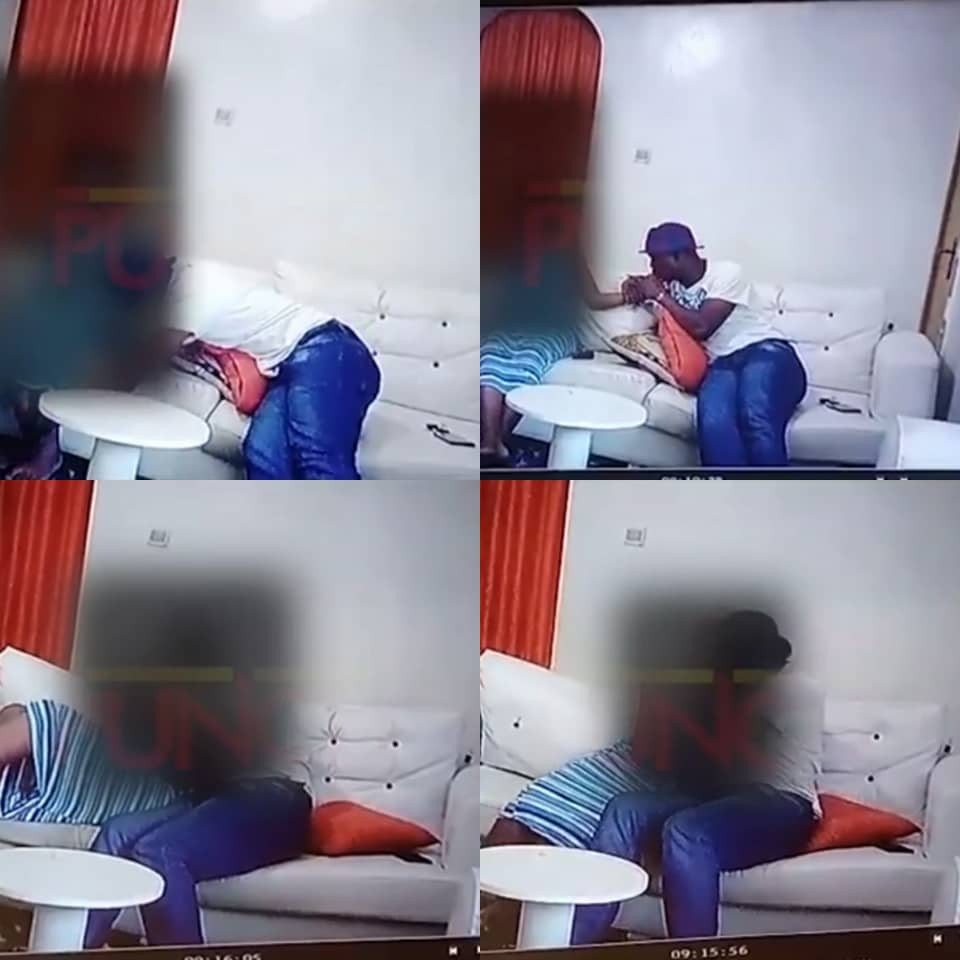 Serious outrage has taken over the Nigerian Twittersphere after a close-circuit Television, CCTV footage which appeared to show Baba Ijesha, Yoruba actor, assaulting his 14-year-old victim surfaced on social media.

The 48-year-old movie star has been in the news in recent times after he admitted to molesting the minor, in the care of popular comedienne, Adekola Adekanya, otherwise called Princess, both when she was 7 and 14.

Following his arrest, the actor has remained in police custody where Hakeem Odumosu, the Lagos police commissioner, said he would stay pending legal advice from the ministry of justice.

But on Sunday, the CCTV footage of Baba Ijesha at the home of Princess surfaced online and generated conversations online.

In the now-viral video, Baba Ijesha, real name James Omiyinka can be seen sitting on a couch in the sitting room dressed in a white shirt, a pair of blue jeans, and a hat.

As a woman who was initially in their company exits the house, Baba Ijesha then appeared to be groping and caressing the young girl.

The footage reveals how Ijesha kissed and fondled sensitive parts of the girl’s body. Not done, Omiyinka, while engaging in the act, was also seen licking the fingers on the left hand of the victim and caressing the minor’s legs and thighs with his left hand.

In an apparent effort to sexually arouse the minor, Omiyinka was seen lifting the victim’s dress as he caressed the minor’s body.

A Saturday PUNCH correspondent who obtained the footage observed that the minor was dressed in a sleeveless gown as she sat on a sofa in Princess’ residence.

Shortly after Princess stepped out, Ijesha, who also sat beside the victim on the same sofa, was seen using his hand to caress the victim’s left arm.

Before Omiyinka started the act, the comedienne was seen leaving her apartment with three others, leaving Omiyinka and the victim in the parlour to see off the guests. After Princess left the apartment, Omiyinka was shown by the footage searching the rooms. Some minutes later, he kissed the minor’s arm, hugged and caressed her body as they sat on the sofa.

However, the victim, who was uncomfortable by Omiyinka’s advances, quickly disentangled herself from the actor’s grip.

Omiyinka was again seen in the footage, standing with the victim in the parlour, hugging her and using his two hands to caress the victim’s buttocks.

The victim, however, disengaged herself again from Omiyinka, who clung to her. Afterwards, Omiyinka was seen using both hands to caress the minor’s head.

The footage also shows him bending the victim to a corner on the sofa and kissing the minor. Again, the 14-year-old girl disengaged herself from Omiyinka’s grip.

PUNCH correspondent observed that the sexual advances were instigated by the thespian. Also, background voices of people monitoring the situation in the parlour were heard in the footage.

Ever since the footage surfaced online, it has provoked widespread criticism on Twitter with a number of users also questioning the motives behind the publication.

“Why just why On a Sunday? Who told who to post that video? Are we not supposed to be protecting our girls? Why is that stupid Baba ijesha video on youtube, IG, FB and Twiter? Someone is profiting off this girl’s abuse,” Uche Jumbo wrote.

“Nothing is protected when it comes to women and girls. Why is that stupid Baba ijesha video on Twitter? And on youtube? Someone/business is profiting off this girls abuse. It’s sad,” a user wrote.

READ ALSO: Watch As Actor, Baba Ijesha Confesses And Begs For Forgiveness After Being Caught While Allegedly Attempting To Molest The 14-Year-Old Minor

Watch the CCTV footage as obtained by Punch Here…

PUNCH Metro had exclusively reported that a senior officer at the Lagos State Police Command confirmed that a directive had been given for Omiyinka’s release from custody.

The source said a case of indecent assault could only be established against Omiyinka, adding that due to the ongoing strike by members of the Judicial Staff Union of Nigeria, courts had ceased sitting and Omiyinka could not be detained indefinitely without trial.

Following public outcry against the decision to release Omiyinka on bail, celebrities, including Iyabo Ojo, Adekanya, among others, protested at the State Criminal Investigation and Intelligence Department, Panti, Yaba, against the likely release of the comedian

However, the state Commissioner of Police, Hakeem Odumosu, while parading some suspects at the command headquarters in the Ikeja area of the state, on Thursday, said Omiyinka would remain in custody pending the legal advice from the Ministry of Justice.

Reacting to the development on Friday, the Lagos State Domestic and Sexual Violence Team said it was actively following up on Omiyinka’s case, adding that necessary support had been provided to the complainant.

“This is to inform members of the public that the Lagos State Domestic and Sexual Violence Team is actively following up on the Baba Ijesha’s case, we are also in direct contact with the complainant with a view to providing the necessary support.

“We confirm that the duplicate case file has been forwarded to the Directorate of Public Prosecution for legal advice. For the avoidance of doubt, the following allegations are being considered:

“We have absolute confidence in the criminal justice system, as well as social support structures in Lagos State in ensuring justice is served in this matter and most importantly, the survivor receives the relevant support on her journey towards healing.

“We, therefore, use this medium to reiterate Lagos State Government’s position of zero tolerance to all forms of Sexual and Gender-Based Violence and our firm commitment in ensuring justice for survivors.” 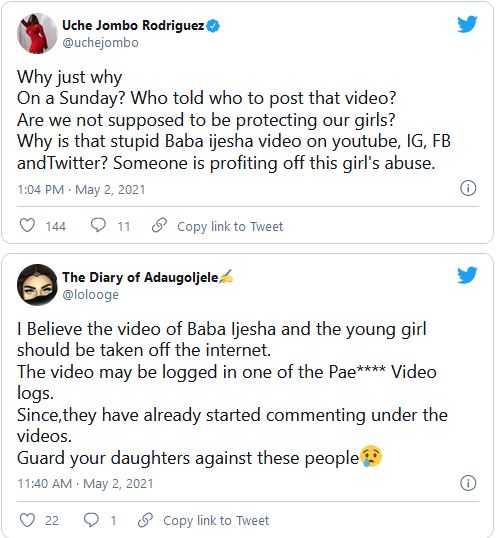 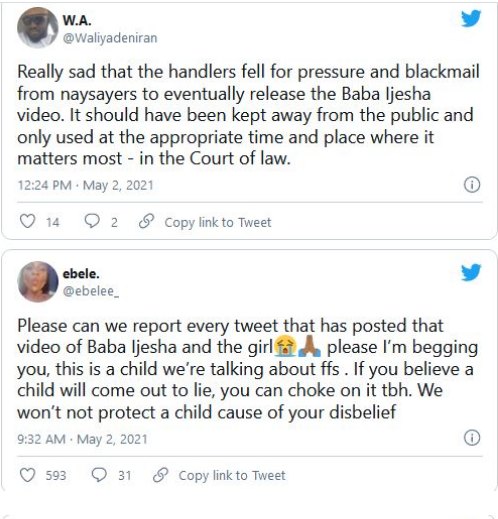 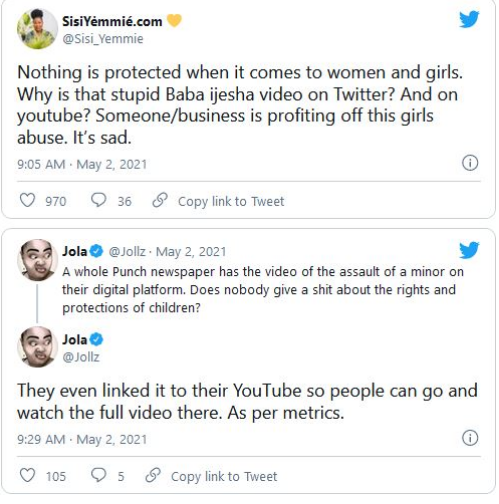