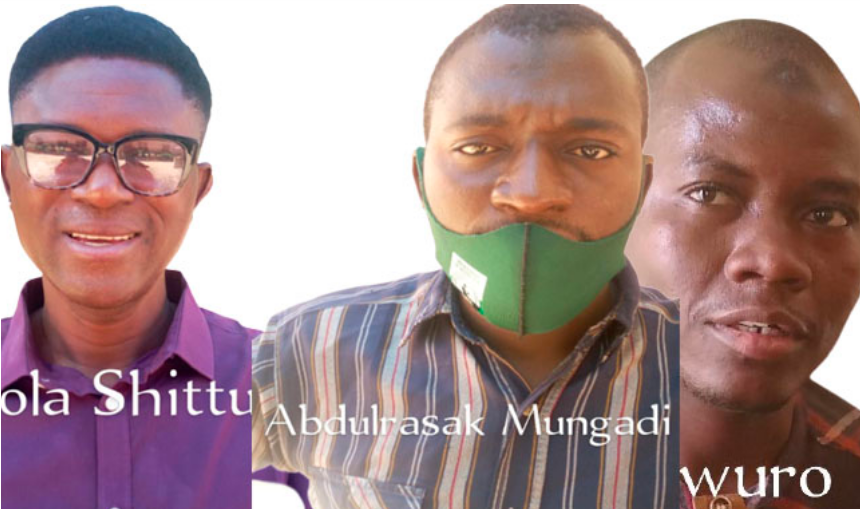 According to Nigeria Health Management Information System January-December 2018, Gombe State has high maternal mortality of 814 per 100,000 live births; and newborn mortality at and 35 per 1,000 live births.

Most women access maternity care through public facilities, as 72 percent of women reported at least one antenatal care visit during their last pregnancy, while 29 percent gave birth in a health facility.

Usman Muhammad Babawuro, middle aged father-of-2, has been married for 7 years to Aishatu. According to Babawuro, he chose to encourage his wife to opt for child spacing about 3-years now after he was sensitised by health workers.

He narrated that his family has become more productive, adding that his wife is energised to go about her daily chores.

When PUNCH visited the couple at their Malam Inna residence behind Gombe State University, Babawuro said that he did not have any regret allowing his wife to use the services of the Primary Health Care Centre. He said,

“I decided to support my wife to try the child spacing option due to the various awareness programmes conducted by health care workers on  some of the family planning methods.

“They stressed its importance for both the mother and the entire family.

“This is because the children will be healthy. Immediately she opted for one family planning method, we noticed so many changes, including a lot of development in our social life.

“As a man, you realise that once a woman is pregnant, she can not do a lot of things, but with child spacing options, she can have time to do so many things.”

With the desire for most parents to give their children the very best, smaller families are now the norm.

Another father, Shola Shittu, who also resides in Gombe State, said he became aware of the advantages of child spacing early in life, adding that it has influenced the choices he made in his marriage of about 19 years.

“I have always loved child spacing from childhood; I can recall in the 80’s in my own part of the country, we had jingles. I was about 10 years old.

A popular Yoruba musician, late Sikiru Ayinde Barrister, waxed a record called Family Planning. That opened our eyes to the consequences of not spacing your children and since then, I had made up my mind not to have more than four children.

Shittu revealed that the sex of children is sometimes the reason why most parents are afraid of child spacing.

“In-between our first and second children, we used condom as child spacing, but after the second child was delivered, I went with her to the hospital for the implantation, which was done in my presence.

“Now, my third and last child is 14 and we have been using the child spacing method. Just recently, my wife reminded me that the implant has expired and I immediately gave her the money for renewal.

“Large families encourage poverty and one way to reduce poverty is to reduce the number of children. The resources that go to the mouth is huge. Men who want to enjoy good life should plan their family.

“If you want to eradicate poverty, which is a major problem for both men and family, government should take child spacing seriously, by making and enforcing enabling laws,”

“Child Spacing is an issue that my wife and I had once discussed and it is moving fine. We have been supporting each other in ensuring that we space our children at least for our own benefit, safety and health of the family.

“There is need for every man to know the importance of child spacing. I call on stakeholders to strengthen the sensitisation. This is because child spacing is not getting enough awareness in Gombe State.

“Spacing your children is like building healthy and prosperous generation; they will be productive and will be cherished. I have two children who are well spaced. These children are healthy and have become a reference point in my area.

“A lot of times, people say, ‘Wow! Mungadi, your children are so healthy!’ and we as parents would brag and say that is the product of child spacing. My first child, I can’t remember taking her to hospital on any case. She never fell ill except while she was growing teeth, which is normal,”

Babawuro added, “As you know, child spacing has a lot of controversies accompanying it, varying from religion, to culture. That notwithstanding, anytime I’m with my friends I usually remind them that religion is not against child spacing; it is not prohibited if you can manage it. This will allow you to enjoy your life and children.”

Mungadi stated, “I have been writing in newspapers and on social media, sensitising people. I have also organised training for my community; just like sensitisation meeting, telling them about the need for child spacing method.”

It’s difficult to nurse a baby while pregnant -Aishatu

A visibly happy Babawuro Aishatu was willing to share with PUNCH the support she has from her husband, Malam Babawuro. Aishatu said she opted for child spacing due to the advantages. Aishatu said:

“Because I want to take care of my health and my baby as well, I breastfed my child peacefully and we were both healthy. It is difficult to care for a child and be pregnant at the same time.”

The mother of two narrated how she was first introduced to child spacing by her husband, stressing that her system prefers implant to injectable, having used both.

“I advise my fellow mothers to go for child spacing because it’s very important. You won’t understand how important it is without going for it. It is very stressful to be breastfeeding and pregnant at the same time, even the baby will be unhealthy.

“My husband has been very supportive, he was even the one that advised me to go for child spacing. I was skeptical of it until he explained everything to me and they also explained it to me in the hospital before I agreed. He gave me his full support and I am very happy for that

“My call to all the men and women will be that they should opt for child spacing because lack of home training in the society and illness are also the consequences of not opting for family planning. One will be busy all the time.”

She revealed that having two children has afforded her the opportunity to take care of both her husband and the entire family.

“I have two children. I observed a lot of changes after opting for child spacing. When I had my first child, I didn’t opt for it and I got pregnant as soon as I stopped breastfeeding. Now that I have my second baby, we are both healthy and I’m at peace, knowing that I’ve opted for child spacing and I won’t get pregnant.

“At first, I went for injection. I went back after two months but they said it wasn’t available, they said they only had that of three months but when I opted for it, I noticed that I started having irregular menstruation; so, I stopped and I decided to opt for the implant, that’s for the period of three years. I really enjoyed it a lot, it doesn’t interrupt my period, I feel absolutely normal,”

At some of the primary healthcare centres visited by PUNCH, most women are opting for safe child spacing methods.

Aishatu Usman, a facility manager of Tudun Wada PHC said that the facility has adopted the method of visiting clients and would-be clients at home, noting that the method has increased the number of clients to over 100 monthly. Usman said,

“After the sensitisation, they started coming, such that in a month, we get above 100 clients and on weekly basis, we get 20-30 persons who come for child spacing.

“Sometimes, we run short of commodities, most especially implants and injectable.

“The men that accompany their wives to the facility are not many; some women come without the knowledge of their husbands, but with time, we usually educate such women. So, with time, the man will support her and sometimes would come with her to the facility.”

“Child spacing is important because it will help the woman to recover before having another child.

“Some clients have complained of bleeding after opting for a method; it is individual differences. For some, their bodies will react because it is new to their system. Some will bleed and others may not, but after the first month, they will be normal.”

Halima Sanusi, the facility manager of Malam Inna Primary Health Care Centre who conducted our correspondent round, said she was impressed with the gradual acceptance and support men are giving to their wives who have opted for child spacing. Sanusi said,

“We sometimes get about 46 to 50 clients in a month. We go for door-to-door sensitisation on family planning and also sensitise them when they come for immunisation, and antenatal care.

“Our challenge is the insufficiency of the commodities for the family planning, but at the moment we have adequate commodities. The ones that come not all of them are accompanied by their husbands to the facility.”

As Gombe grapples with 18 percent unmet need for family planning

Focal person, DevCom/TCI, Alhassan Yahya, in an interview with newsmen, said there has been an increase in the support accorded Gombe women in accessing child spacing in the state by their spouses. According to Yahya,

“This can be achieved by sensitising more and more people towards reducing the unmet needs from about 18 percent to the nearest minimum number.”