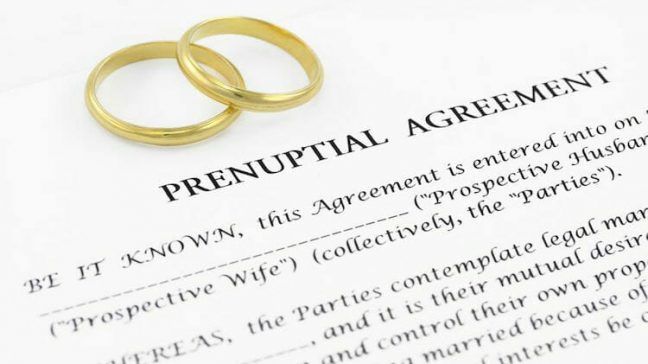 Polio Survivor, Mrs Helen Alonge Tells Her Inspiring Journey On Winning At Life Despite The Abuse And Discrimination That Marked Her Adolescent Years

An Abuja-based lawyer, Mrs Toyin Nwiido has counselled intending couples on the dangers and legal implications of not signing a pre-nuptial agreement before going into marriage.

Mrs Nwiido who made this known in an interview with the News Agency of Nigeria (NAN) in Abuja, was of the opinion that intending couples should not see a prenuptial agreement as a document that is only necessary and become handy in the event of divorce.

According to the lawyer, Pre-nuptial agreements, more popularly known as pre-nups, are agreements entered into by couples before they formally get married which set out how they will financially arrange their affairs during their marriage and more importantly how their finances will be dealt with in the unfortunate event of a divorce.

She advised that signing this agreement before marriage will protect couples, be of great benefit to them while they are still married and equally become a cherished document in the circumstance the marriage hit the rock. She further explained:

“Naturally, cultural beliefs, especially in a country like Nigeria, will influence people’s views of agreements of this nature.

A prenup should not be viewed as a contract made because the parties are envisaging or anticipating divorce.

Additionally, with a prenup, there can be a discussion of spousal support and what would happen if either party dies prematurely.

Prenuptial agreements usually sets out provisions for division of assets, inheritance and other financial provisions, for the spouses and children in the unlikely event of a divorce or a separation with a legal backing.

Section 72(2) of the Matrimonial Causes Act recognises the right of parties to execute pre- and post-nuptial agreements.

The relevant provisions are permissive and not interpretative and the courts retain unfettered exercise of their discretionary powers in divorce settlements.”

Mrs Nwiido went further to explain the dangers for couples who do not sign a prenup and ultimately get divorced. She said without a prenup, a person likely will not have nearly as much control over how their assets are divided. She continues:

“If you decide not to sign a prenup and ultimately get divorced, it may leave a party vulnerable, and they may not be able to protect certain assets.

A prenup can clearly state that whatever an individual had before marriage will not be part of what will be shared in the event of divorce. This is done to protect usually spouses that come into marriage with either self made money or inherited wealth.

In the absence of a prenuptial agreement, It is likely that such individual’s assets and properties will simply be divided between them and their former partner 50/50.

This could even include family heirlooms and businesses depending upon what occurs during the marriage.

Another danger of not signing a prenup especially for women who gave up their careers and businesses to become stay-at-home mums, will be that in the unfortunate event of a divorce,they may be left with nothing.

However, a prenup agreement is likely to protect her, at least it can state that in case of divorce, she walks away with certain percent of the man’s money or assets earned, acquired in the course of their marriage.”

The legal practitioner in addition said that it is possible a party could be held financially responsible and accountable for a former spouse’s liabilities and debts.

Nwiido cautioned and advised that If one party refuses to sign a prenup and the parties eventually get divorced, she said the standard laws regarding alimony or child support and equitable distribution would be applicable.

“Premarital assets would also be exempted from equitable distribution so long as it can be proven”,