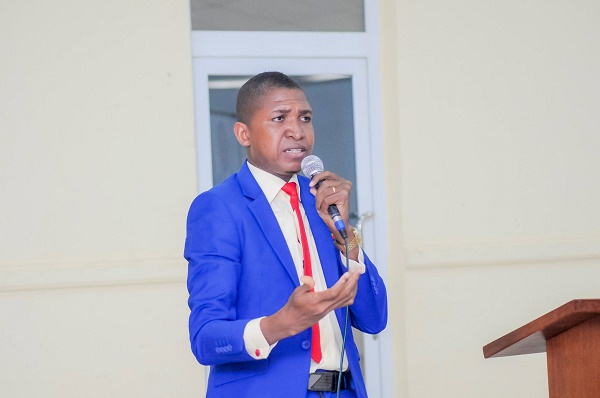 Ghanaian counselor, Frank Adofoli has stated that anyone who thinks marriage is an achievement has a village mentality.

According to the renowned and celebrated marriage counselor, there is a widespread village mentality about marriage, as being one of the highest achievements in life especially for ladies in this part of the world, Africa.

He added that people ridicule unmarried people just because of their status and families negotiate over single ladies as if they are a product for sale all in the name of marriage.

He further stated that some men approach ladies in their 30s in a bid to marry them as if they are useless without marriage, or they are doing them favour.

The counsellor further stated that being single does not have the ability to kill an individual, however, the pressure to get married is very disastrous.

He suggested that people should stop asking people stupid questions such as, when are they getting married because you are married.

The counsellor made this known in a recent Facebook post titled, ‘GETTING MARRIAGE IS NOT AN ACHIEVEMENT’ and the full message reads;

“There is a widespread village mentality about marriage, as being one of the highest achievements in life especially for ladies when you come to this part of the world.

People ridicule you because you are not married at a certain age. Families negotiate over you as if you are a product for sale all in the name of marriage. Men approach old ladies in a bid to marry them as if they are useless without marriage and they are doing them favour.

Some ladies assume they are doing the older men a favour by getting married to them. Some unmarried people are so frustrated and have untold pressures on them to get married.

People go to church to seek for marriage and not to worship God, then once they are married they cut links with the church. Marriage has become a competition amongst peers. Dating left and right, doing all sorts of uncalled for and nasty things in a bid to get married.

Sometimes the way the church loudly applauds marriage announcements and partners planning to get married, alone puts pressure and makes other single members who are advanced in age feel they are either cursed, not blessed or are being punished for a sin, or that some spiritual issue is responsible for their singleness.

Marriage is a Grace and not an achievement. God created us for assignments and not marriage. Everyone needs to discover their assignment. Again, children are gifts from God. Only He determines the gender of a child. Having more eligible women than men does not mean something is wrong with the women.

Marriage is just one stage of life. And it is not for everyone. It is time we stop pushing people into wrong marriages, destroying their future and happiness. No one should force anyone to marry. No parent, family, pastor or friend should put pressure on you to get married.

It is not a taboo for a woman not to give birth. Every child needs a family and ideally only marriage can provide the child with that support. Stop pushing the woman to sleep with people just to have a child.

There are orphans who are also supposed to be taken care of. Let’s stop this mad race in the name of marriage. Being unmarried is not a taboo but a blessing. No man or woman was born with the name of their spouse written on them.

Let’s raise responsible adults, so they can take responsible decisions such as on marriage. Marriage is not supposed to cause pains like it is doing in our generation now. We are in hurry to marry on Saturday while others are in a hurry for a divorce on Monday.

STOP asking people stupid questions such as, when are they getting married because you are married. How will you feel when they ask you when are you getting divorced? Allow God to lead them to where He wants them to be. What you can do for them is to pray for the will of God be done in their lives.

Inclusion, But Jesus said, “Not everyone is mature enough to live a married life. It requires a certain aptitude and grace. Marriage isn’t for everyone. Some, from birth seemingly, never give marriage a thought. Others never get asked—or accepted. And some decide not to get married for kingdom reasons. But if you’re capable of growing into the largeness of marriage, do it”- Matthew 19:11-21 (MSG).” 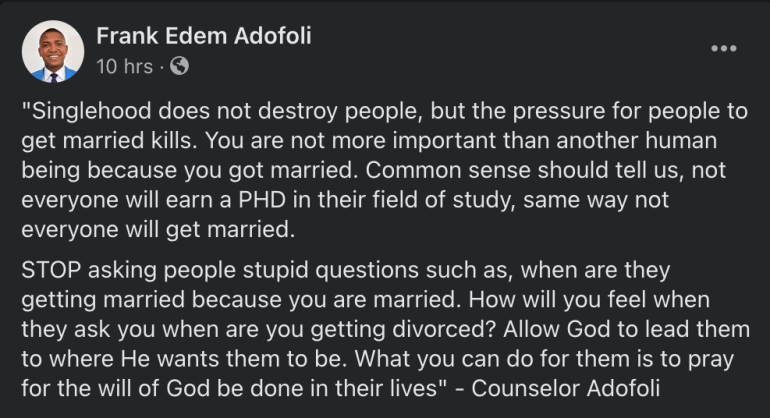