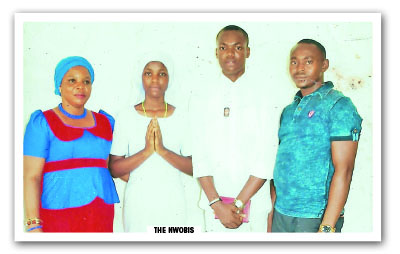 Every marriage has its challenges in the early stage and this couple’s marriage is no exception. A few years into the marriage, Mrs. Ngozi Nwobi came home one day, packed all her belongings and left with her son.

In this interview with DailySun, Mrs Ngozi and her husband, Mr. Felix Kenneth Nwobi, from Agbaja, in Nwangele Local Government Area of Imo State, who has been married for 25 years, share their experiences of what happened and why.

The couple who are blessed with three boys and a girl, also talked about the secrets of their happy marriage and offer useful pieces of advice to both intending and newly wedded couples.

How and where did you meet?

Felix: I met her through my elder sister. She told me about her, that she was a good girl and could manage the home very well. But before I met her, I prayed, fasted, and sought God’s direction. The day I met her, I took off from Port Harcourt to Aba. My journey to Aba was very smooth. From the moment, I sighted her in Aba, I knew within me that she is my wife.

Ngozi: Well, I would say that I married him when the time was due. I agreed to marry him because I love him. It is true that his elder sister approached me and told me that she wanted her younger brother to marry me. I agreed. So, the day he came to me, I saw him, liked him, and agreed to marry him. We married and since then, we have been living happily with our four children.

How did you propose to her and what did she say?

Felix: You know, the normal way a young man approaches and proposes to a young lady. That was what I did. I approached her and told her that I wanted to marry and live with her forever. I told her what I was doing. At that time, I was working with Michelin. She agreed.

Ngozi: I did not object. I agreed because his elder sister had already told me about him.

Was there any opposition from family members, friends or colleagues?

Felix: There was no opposition from any quarters. In fact, everyone that saw her liked her and told me to go ahead.

Ngozi:  Nobody objected to our marriage. Not only me, my family members, my parents, and relatives also saw him and liked him.

Why did you decide to choose her out of many other girls that were available for marriage in those days?

I decided to go for her because of her character and stature.

Why did you decide to marry him? Were there no other suitors that came to ask for your hand in marriage?

Ngozi: I like him for his character. When I saw him and my instinct told me about his good character, I accepted him.

What was the remarkable thing about your wedding you cannot forget?

Felix: What I can’t forget was the crowd that I saw during our church wedding. In fact, we planned for a low-key wedding celebration. But what I saw that day and how colourful it was, was too fantastic. I never imagined or planned to have such a celebration. How it happened, I did not know but it was great.

Ngozi: What he said is true. But what I will like to add is that, after some years, a Rev. Father that wedded us, asked women: “if you have been in marriage for a certain period without quarrels with your husband, and a third party had not entered your marriage to settle quarrels, come out.” I was the only woman that came out. That question is still fresh in my memory.

SEE ALSO: Comedian And Mom, Warri Pikin Gets Real About A Dark Moment Early In Her Marriage Leading To A Suicide Attempt

How did you settle your first misunderstanding in marriage?

Felix: I wouldn’t say there was a misunderstanding. It was when she decided to play a trick on me. There was one of her friends that lived in the same compound with us. She told her friend that she wanted to test me, to find out if truly I love her.

One day, she suddenly packed all her belongings without any quarrel and said she did not want to marry again. She said she was quitting the marriage. I didn’t know that she was trying to test what her friend told her. She packed and took my first son along.

I couldn’t believe what was happening. It was as if they put fire inside my body. It was unbelievable. In fact, I pursued her into the street, begging. But she refused, saying that she was fed up with the marriage.

I came back to the house and knelt down, and told God that I had handed over the matter to Him. That was the only problem I could tell you touched my heart since we got married.

Madam, is that truly what happened and why did you do that?

Ngozi: What he said is true. You know, as a young girl, I didn’t know any other man before he came. It happened due to the advice I used to get from friends. They told me that if you want to find out if your husband truly loves you, act funny to find out if he would beg you.

It is from his reaction you would know if he truly loves you or not. So, on that fateful day, there was no problem. We were not quarrelling. But I began to find faults with many things he was doing in order to provoke him so that we would quarrel. But he did not succumb to my antics.

I tried and tried to get him. But he did not get provoked. It was at that point I remembered the advice of one of my friends, that I should pack my belongings and carry my child and pretend as if I am going. She said that if he begs me, I should know that he loves me. But if he did not, then it is proof that he did not love me.

I acted as my friend advised. And, truly he begged me. I then concluded that he loves me and came back to the house. That was all.

What is that thing in the life of your spouse you would want God to change?

Felix: There is none because she is very good and her character is excellent. She is quite okay for me.

Ngozi: If it is about character, he has good character. I would want God to change and make him industrious. That is where I am bothered. Apart from that, he is 100 per cent good.

What advice can you give to young men who want to go into marriage?

Felix: They should go down on their knees and pray to God. Every young man who has not married should always pray to God to give him his own wife. Also, he must be mature enough before going into marriage. He must have a handiwork or a source of livelihood. Don’t marry because your mates or friends have married.

What advice do you have for spinsters before they marry?

Ngozi: They should realise and understand that whenever God has destined them to marry is when it would be. Marriage is not by force and there is no competition in it. It is not something that you wake up in the morning and walk into.

You must be on your knees if you want to succeed and get the person God has prepared for you and your future children. You must pray not to marry another woman’s husband. You must pray for a God-sent man. He has destined you to live with. You should know that misunderstanding and disagreement cannot be ruled out in marriage.

Love is very important because in times of challenges, love will surmount the problems. Don’t go into marriage on your own. Allow God to lead and guide you. If you fail to seek God’s face, and enter marriage out of your own wisdom, and marry another woman’s husband, when the problem comes, you can’t blame anyone.

To avoid divorce, seek God’s guidance to lead you to your divinely ordained husband.

ALSO SEE: Making A Marriage Work: The Adiris Draws Lessons From Their 32-Year Marital Experience In Advice To Young Couples

What advice can you give couples, so that they can enjoy their marriages and have a peaceful home like yours?

Felix: The foundation of every happy marriage and home is God. Once you have laid the foundation on God, every other thing, including challenges, is secondary. There is no challenge the two of you cannot overcome. Human beings are not perfect.

It is only God that is perfect. Couples must be prepared to tolerate and overlook each other’s weaknesses. They should learn from each other and endeavour to settle their matters together without a third party.

Ngozi: Couples, particularly women, should learn the character of their husbands, the dos and don’ts of men. Whatever your husband dislikes or tells you not to do, don’t challenge him. Women should also study their husbands and know the nature of their businesses.

Don’t destroy your husband’s business, especially if he is into women’s goods because it is from that business that he got the money he used in marrying you. Women should respect and love their husbands in all situations. Most importantly, couples should learn the good sides of each other.

What is the secret of your marriage success?

Ngozi: The foundation of our marriage is God, just as my husband has said.