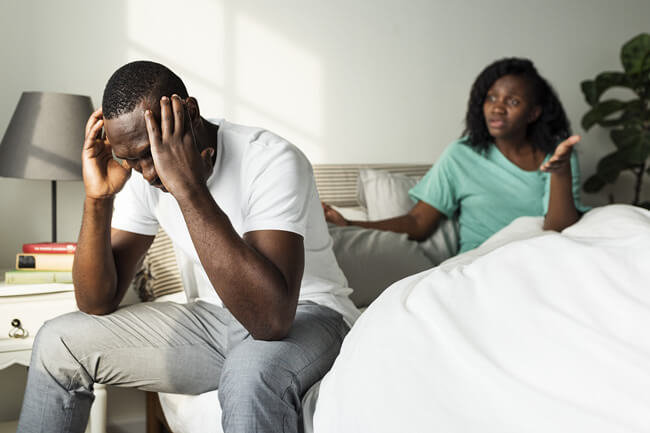 If you are faced with these concerns, experts advise that they must not be ignored, thinking that they would just go away. They usually don’t, and if left unattended to, things could even get worse.

Instead, experts recommend having an open, honest, and respectful talk with one’s spouse about the problems in one’s marriage. It can be a difficult conversation to have, but it is necessary.

A marriage counsellor and author based in the United States, Sheri Stritof, says one of the signs to know one’s marriage is failing is criticising each other every now and then. Stritof writes on VeryWellMind.com.:

“Sure, a little constructive criticism can be a good thing. But if you’re dishing out more criticisms than compliments, you’re headed for trouble. Research shows that you need five (or more) positive interactions to counteract every negative one in order to keep a relationship on good terms.”

Stritof says another sign one’s marriage is ailing is when one keeps having the same argument over and over again. She adds,

“Arguments happen in every marriage, even healthy ones. In fact, research suggests that couples who argue effectively are 10 times more likely to have a happy relationship than those who sweep difficult issues under the rug.

“But if your time together is plagued by endless reruns of the same argument and there is no resolution, chances are there’s a major disconnect between the two of you. Before too long you’ll start avoiding each other for fear of sparking another argument.”

On the other hand, not arguing again could also signal an ailing marriage, according to Stritof.

“As opposed to the previous point, the lack of argument can also signal a huge problem. It might seem like a relief if your high-conflict relationship suddenly turns into a no-conflict relationship. But if the healthy arguments have stopped, it could be a sign that one or both of you has given up,”

Another sign of a failing marriage is not having sex with each other anymore, says Stritof.

“Everyone goes through periods of ups and downs in the bedroom. Not wanting to rip your partner’s clothes off every night is no reason to panic.

But if you’re both physically healthy enough to have sex, but go months or even years without it, a deeper issue – like a lack of emotional intimacy or romance – may be the issue,”

According to experts, another red flag in a marriage is when both partners are not spending time with each other again.

You realise that you would rather spend time with anyone but your partner. Spending time apart is healthy for your relationship. But if you’re constantly making excuses to spend all of your free time away from your partner, you’ve already begun the break-up process, according to Stritof.

The marriage counsellor also states that keeping secrets is another sign that one’s marriage is failing. She says,

“It’s completely normal to want to keep some things to yourself. However, deliberately keeping secrets – say, you had dinner alone with a co-worker who finds you attractive, casually hung out with an ex, or bought the expensive shoes you said you wouldn’t – is a clear warning sign that your relationship may be in trouble.”

Also, when a partner is thinking about having an affair, it is a sign that all is now well. Stritof says,

“It’s 100 per cent perfectly normal to find someone other than your partner attractive from time to time, according to relationship experts. After all, entering a relationship doesn’t switch off your normal biological functioning.

“What’s not okay? Fantasising about being with that person. If your thoughts are constantly consumed by someone you find attractive other than your partner, then you’re clearly missing something in your current relationship.”

However, an ailing marriage can be saved, and with the following pieces of advice, experts believe that a marriage on the rocks can bounce back and thrive.

Identify what made you fall in love

A marriage counsellor, Mrs Funmi Adelakun, says when a marriage starts to show signs of failing, it is good to return to the beginning of the relationship and identify what made the two partners fall in love initially. She says,

“It can be saddening when a partner thinks about how madly they were in love with their partner and how damaged their relationship had got. But in my years of experience of counselling couples on the verge of a breakup, the first thing I ask them to do is to draw a list of at least 10 things they admired about their partner when they fell in love.

I discovered that I don’t talk much if the partners are able to identify what made them fall in love initially. It is then easy to repair their broken marriage.

The truth is that many people lose sight of the things they liked in their partners along the line, and because of this, the marriage gets tiring. Thinking back to when times were good and when they had just fallen in love can really help to lift their spirits and heal their broken marriage.”

Also, a clinical psychologist in the United States, Dr Erica MacGregor, says remembering the good times can save a failing marriage.

“When you first met, did you love exploring new places together? Did you make each other laugh? When a marriage is failing, it’s important for both partners to try to recognise and remember the things that once attracted them to each other,”

she writes on oprahmag.com.

A marriage therapist based in the US, Ellen Chute, advises couples to recognise what had been working for them, saying divorce should never be the first thing to consider in a failing marriage.

“Chances are, your relationship isn’t all bad, all the time – but it can be hard to single out the good things when there’s so much discord. All marriages have low points. What brings people out of the low points is their ability to be open to the positives.

“One way to do this is by changing your inner dialogue when you’re unhappy with your partner. For example, instead of thinking, ‘I’m so irritated that my partner is never home for dinner,’ try saying, ‘I’m grateful my partner has the weekends free to spend time with the family.’

Reframing your mindset to be more positive allows for more acceptance and may help rebuild the friendship and trust that feels gone,”

“If your spouse has gone from being your best friend to feeling like a total stranger, you may wonder if your marriage is on the outs. But getting a divorce is a huge decision, especially if there’s a chance you can rebuild what’s been lost.”

Start to listen to each other again

A relationship expert, Rachael Pace, says couples whose marriages are on the verge of failure should start communicating and listening to each other as these can help to save their marriages.

“Have conversations again and really start to communicate with one another. Listen to what your spouse is telling you, and then ask the same from them. Really make it a point to listen to one another again and it may very well be what helps you to uncover what was once great about your marriage.

“Wondering how to make a marriage work? Just listen to your partner, try to understand what they need,”

she writes on marriage.com.

Reflect on threats to your marriage

Why do marriages fail? Where did things go wrong? What happened that got you to the point of a broken marriage? Have you grown apart? Did one of you cheat? Or did life just get in the way?

According to Pace, identifying the causes of a broken marriage is important to fix it.

She identifies some of the reasons why marriages fall apart to include lack of care and affection, communication gap, infidelity and difficult times. She says,

“Even if a relationship has gone through such problems, saving a broken marriage is not impossible. There are plenty of circumstances for which you can work through even though they have chipped away at the marriage to this point.”

Maybe your partner had an affair. Or perhaps you discovered something about your partner that shook you to the core. Whatever it is, MacGregor says if both partners decided to move forward together, it was important to embrace what happened and commit to a new beginning. She adds:

“In some cases, this means grieving the loss of what you once idealised in your relationship and realising that it has changed into something different. You can recreate something fresh, with more transparency than before.”

Do you count on your partner to be your everything? If so, that can hit a marriage hard.

“We cannot expect our partner to fulfill all our needs,” a psychotherapist and author based in the US, Kelley Kitley, also writes on oprahmag.com.

“In order to have a healthy marriage, we have the responsibility to live dynamic lives including socialising, friendships, and activities that ensure we are living our best life. When you are happy with yourself, it’s easier to be happy in the relationship. We are all a work in progress.

“Both individuals in the marriage need to make improving the relationship a priority. But to do this, each person needs to be self-aware and reflective of their role. Some marriages just need a tune-up to make them work again. Date nights or going away on an uninterrupted weekend together can help regain lost intimacy,”

According to Kitley, one may follow all the pieces of advice offered by people and read all the books on marriage but sometimes the most effective option is to see a professional therapist who can work with a couple to address specific issues.

“A marriage therapist can act as coach, mediator and a teacher,” she says.

Meanwhile, Kitley says a good marriage therapist should stay as neutral as possible while supporting and challenging two partners.

“Alternatively, if you’re a member of a religious organisation, you can ask if they have trained clergy to counsel you,”

In addition, MacGregor advises partners in a failing marriage not to give up too soon on their relationship. She says,

“Understandably, there may be some ambivalence but there has to be a commitment to try to work through the difficult issues. This can take months or even years because each couple and situation is different.

“The truth is, everyone has their bad habits, annoyances, and unique problems. If each partner realises that they will have conflicts no matter who they are married to, this bodes well for the success of the marriage.”