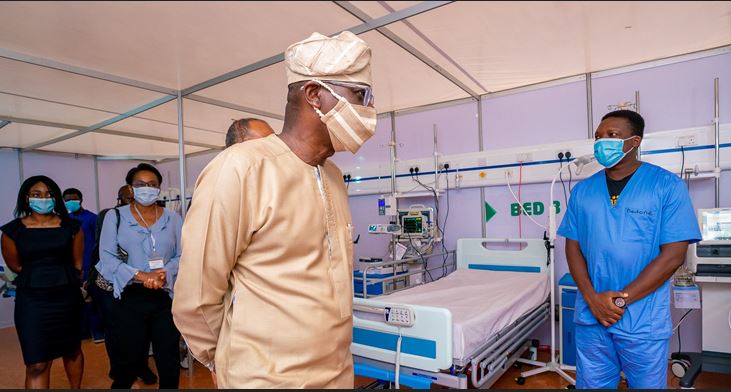 Governor of Lagos State, Babajide Sanwo-Olu, has expressed concern over the increasing cases of the dreaded Coronavirus cases in the state, PUNCH reports.

In an update on Sunday, Sanwo-Olu said isolation centres in the state have recorded a five per cent increase in occupancy in two weeks.

According to the governor, it appears that there is a potential third wave in Lagos State. The governor explained that as of July 7, Lagos State had recorded a total of 60,202 confirmed cases of COVID-19.

Of this number, 55,135 have recovered in-community and 770 are currently being managed actively in the community.

He noted that over the course of managing the COVID-19 pandemic, about 4,382 patients have been admitted into our various COVID-19 care centres in Lagos: with 357 registered fatalities. In his words:

“Starting around the end of March 2021, the second wave of the COVID-19 pandemic in Lagos State began to wind down, and we began to enjoy some reprieve from the worst effects of the virus.

This allowed us to further open-up the economy to allow the start of the journey towards full normalcy in our lives and the pursuit of livelihoods, after what has been a very difficult year.

Regrettably, in spite of the hard work and dedicated efforts towards sustaining the return to normalcy, over the last three months, we are now finding ourselves at what appears to be the start of a potential third wave of the COVID-19 pandemic, in Lagos State.

From the beginning of July, we started to experience a steep increase in the number of daily confirmed cases, with the test positivity rate going from 1.1% at the end of June 2021 to its current rate of 6.6% as at 8th of July 2021.

The rapid increase within a week gives great cause for concern. Also, within the last two weeks, the occupancy rate at our two isolation centres increased from an average of one per cent to sic per cent.

This is the new and disturbing reality that now confronts us. But we must not be demoralised by this. We must instead resolve that we will not leave any stone unturned in our bid to effectively mitigate the third wave of this pandemic in Lagos State.

As you all know, Lagos has been the epicentre of the pandemic since the start, and the way we manage it here has a significant impact and reverberating effect on the national outlook and outcomes.”

This is coming barely three days after the Nigeria Centre for Disease Control, NCDC said it has detected a confirmed case with the SARS-CoV-2 Delta variant, also known as lineage B.1.617.2.

The NCDC in a statement said the variant was detected in a traveller to Nigeria, following the routine travel test required of all international travellers and genomic sequencing at the NCDC National Reference Laboratory, Abuja.

The deadly Delta variant is recognised by the World Health Organisation as a variant of concern, given its increased transmissibility.

The variant has been detected in over 90 countries and is expected to spread to more countries, according to the NCDC.