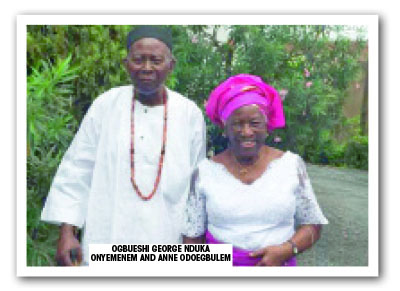 Mum-Of-2, Tia Mowry Gets Candid About Her Postpartum Experience: ‘I Literally Thought Something Was Wrong With Me’

The love story of the nonagenarian couple, Ogbueshi George Nduka Onyemenem of Asaba, Delta State and his wife, Anne Odoegbulem of Afor-Ibeku, Aboh-Mbaise, Imo State, is an inspiring one.

George who retired in 1973 as Acting Chief Inspector (Director) of Mines in the Federal Ministry of Mines and Power is, today, the Diokpa (traditional village head) of Umuezeafadia, Asaba.

Married for 70 years, during which time they weathered the storm in all its ramifications, the couple is blessed with five children, four girls, one boy (Chike George Onyemenem, SAN), 15 grandchildren and four great-grandchildren.

The couple recently celebrated their platinum wedding anniversary but in a rather low-key manner. In this interview with DailySun in Asaba, the duo spoke on how they met, and the principles that have continued to sustain their relationship through the years.

What was the circumstance?

Mama Anne: I was in Jos, teaching at the Convent School. Then I lived in a one-room apartment at the teachers’ quarters given to us by the sisters. I lived with Miss Chukwuma, Fr. Chukwuma’s sister. She was an Asaba woman, and Asaba people used to come to visit her from time to time. And this man was one of those who visited her. That was how I met him I think, about 1949.

What was on your mind when you met her?

Papa George: What was on my mind then was that she was somebody I could marry.

What attracted you to her?

Papa George: She was a teacher and I was working in Mines and Power. Jos is a likeable place. We became friends. Later, our friendship developed into marriage. To marry a teacher in those days was an attractive idea. Of course, physically she was attractive.

Among other available damsels at the time, why did you decide to go for her?

Papa George: I have already told you: the fact that she was a teacher and very attractive too. That made me fall for her.

When he approached you, what was that thing that made you agree to marry him?

Mama Anne: What attracted me to him at first was that he was different from many of the young men who used to visit Miss Chukwuma. He was well behaved. He was quiet. He was not as noisy as the other men. And, he was a good-looking young man.

The first time I met him, I never thought about marriage. So, it wasn’t love at first sight. But when I got to know how he behaves, his character and things like that, those were the things that attracted me to him.

SEE ALSO: The Oluwadares’ 36 Years Marital Journey Is Proof That A Rough Beginning In Marriage Can Make A Good Ending

Papa George: By telling her that I wanted to marry her. She was living with my cousin, Miss Chukwuma. So we became acquainted and gradually we became friends.

How did you respond to his proposal?

Mama Anne: My response was yes because I liked him.

Was there any opposition maybe from your parents, relatives and friends?

Mama Anne: He hadn’t proposed to me when his mother came from Asaba to Jos to visit him. It was Miss Chukwuma who told me that ‘George loves you and he wants his mother to come and see you.’ From there I knew his intention.

But when I told my people, especially my younger brother who was in his final year in secondary school then, he said I should take care not to marry a slave outside our home. He said that because I was the only daughter of my mother. My mother didn’t like the idea. There were many young men in Mbaise, Imo State who wanted to marry me.

She would have been happy if I accepted one of them. But it was not God’s will. I met this man and I liked him. So, in spite of all the protests from my mother, I accepted to marry him. But the Mbaise people didn’t like it at all. His sister who was in the market came to me one day to complain that Mbaise people wouldn’t allow her to rest.

She said that they were saying that their child, their daughter they trained had been taken away. So there was general opposition from my people as a whole, and my mother, from my immediate family.

What can you remember about your marriage ceremony?

Mama Anne: In those days, close to the end of World War 11, before the soldiers came home, the bride price in my place was 20 pounds. But when the soldiers came back from the war with bags of money, they started paying 40 pounds.

But when my fiancé came to our place, I told him to bring 20 pounds. He brought it and my uncle received it. My brother had no say; it didn’t matter to him whether the money was paid or not. What mattered to him was if the man would keep me happily married.

What is your wife’s favourite food?

What is his favorite food?

Mama Anne: Now it is difficult to say what he likes to eat. We old people, we change a lot. What we liked in our youth is not what we like now. But he used to like rice, pounded yam and any type of Nigerian soup.

After our marriage in Jos, we lived there together for about a year before he left me and went to England. We used to eat the normal Nigerian food – pounded yam and soup, boiled yam and all that. But he never told me there was any he didn’t like.

Could you recall your first major disagreement in marriage and how you resolved it?

Mama Anne: I don’t think I can recall our first disagreement because we never had any major disagreement. We had minor issues but I cannot remember the first one.

How were issues usually resolved between two of you?

How long was your courtship?

From your own experience, what is the secret of your long-lasting relationship?

Mama Anne: Marriage is a matter of give-and-take. If he offended me, I would forgive him, and vice versa. Anything he did which pained me, I used to forgive him. And, anything I did which he didn’t like, he would also forgive me.

What is your advice for young couples on how they can have a long-lasting relationship?

Mama Anne: Patience is what is needed. Marital life is not easy. You see, I am talking glibly now. Little things irritate people. So, whatever you do that irritates your spouse, drop it.

Papa George: That is also my view. This principle is what has kept us going as husband and wife all these years.

How many children do you have as a couple?

Mama Anne: We have five children. Irene (now Ubah) is the first. I left her with her cousin in Lagos when I went to meet my husband in England. When we came back, we had others.

Did you have issues with the fact that your first four children were female?

Mama Anne: Not with my husband, but with outside people. Some of them would say: ‘what is that woman doing there? Won’t you go and get another wife who would give you a male child?” But they forgot that they are not God. In the end, I had a boy.

What have been the high and low points of your marriage?

Mama Anne: My happiest moment is having children who are happy together; they don’t quarrel. In some families, you find brothers and sisters fighting over one thing or the other. But there is no such thing here.

They are ready to help one another. And, also my husband, because of the way we behave, many people used to say that I was holding him down with some charm. But I don’t go to native doctors. It is only that he forgives me and I forgive him.

On the low point, I was afraid when we decided to relocate permanently to Asaba after his retirement. This was because l am not from here and I have never lived here. But nothing happened.  They welcomed me very well.