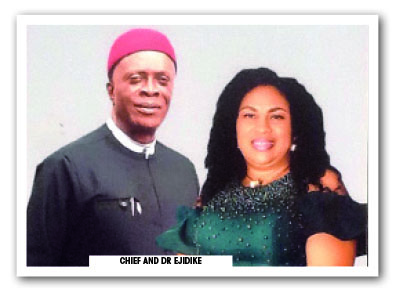 The couple who got married in 1994 is blessed with four children – two male and two female.

In a chat with Daily Sun, the couple who said it was love at first sight shared the secrets of their 27-year-old marriage.

Chief Basil:  I did not go about searching for a wife but I was due for marriage at that material time in 1994. She crossed my way at the time I needed a wife and that is why I regarded our coming together as God’s making. She met all I needed in a woman at that time and still up to date.

Dr Chinyelu: That day, he came to our town in Igboukwu and was looking for somebody in our neighbourhood. I was outside our house when he came to ask me the direction to the place he was going to and I directed him. The same day on his way back, he stopped at our house to thank us. I was with my father that day. Then, after two or three days, he came back and that was how he started.

Was there any opposition from relatives or friends?

Chief Basil:  None, because there was hand of God in the entire thing.

Dr Chinyelu: There was no opposition because he met all the requirements I wanted in a man.

What were those things that attracted you to her?

Chief Basil:  First, I’m dark in complexion and I felt I needed somebody who is fair in complexion to have a perfect blend. Secondly, I’m a humanist and in the pure arts, and I wanted also to blend with somebody who has a science background.

I wanted to marry somebody who is in medical field and fortunately she was in that field. I also wanted somebody who is religious and accommodating. I’m a little bit hot tempered, especially when offended, and I needed a kind of a coolant.

What qualities made you choose him above other suitors?

Dr Chinyelu: I had a lot of suitors when I was in the university. My father was a chartered accountant and my mother was a headmistress. I got admission at 16, the year I finished my secondary school. And my parents never wanted me to marry until I finished my university education.

So, those suitors who were coming from my town and other places, my parents objected to them. The day my husband came to our house, I had graduated and came back to prepare for my NYSC. As I said earlier, he was looking for a place and I was standing at the front of our house.

When he left, my parents told me that ‘you are now matured for marriage since you have your first degree.’ I had gotten a placement to Lagos for my youth service and was about leaving the day he came. So, we started praying about it and at the end of the day it worked out.

Chief Basil: We never courted for one day; the marriage came naturally. This idea of having a deal with the wife to be for a time before marriage was not in our case because we never had time to court. It was love at first sight. I met her and it struck me that she was my wife.

Then, I just finished work as a supervisor for health in Onitsha Local Government. I came to her town in Igboukwu for a purpose and not necessarily to look for a wife. When I came back to her house after two days I asked for her and she came and I introduced myself and she did too.

I can’t remember how the whole thing worked out, very frankly. What I know is that after that first meeting the relationship continued and we became too close and not up to a month I came to pay her dowry.

He said it was same man that asked me for direction two days ago, wondering what was he coming back to do again? So, my father and him started discussing, telling stories. I came out to serve them and he called me and asked me what I was doing at that particular time. I told him.

Then he told me he wanted to marry me. I couldn’t say yes or no that day and he left. He continued coming and we started talking and I informed my parents and he later came with his brother and officially told my parents his intention. And within one month, he had paid my dowry.

Chief Basil: The dress she wore that day really struck me. The entire arrangement, the environment, the reception was done in an open field. not in the hall. She was splendid in the gown that day.

The thing kept recurring in my mind because she wore a very longish gown with long attachment of the gown flowing on the ground while her chief bridesmaid held it when necessary. It was like a royal wedding and that was my taste and I thank God that I met that standard that day.

Dr Chinyelu: I’m from an average family, he gave me the support and made me proud because the actual thing I wanted for a wedding, he gave to me and I saw it that day.

The wedding was classic and I was so happy and that was my dream. He provided a police band from Enugu, there were pipers -it was like a royal wedding.

READ ALSO: Making A Marriage Work: The Adiris Draws Lessons From Their 32-Year Marital Experience In Advice To Young Couples

Could you remember your first misunderstanding in marriage and how you handled it?

Chief Basil: We are all human beings and we are bound to have misunderstandings. One of the attributes she has is the attribute of accommodation, having an understanding mind. I’m now beginning to let go the attitude of being easily offended.

I’m a little bit hot tempered and for us to have gone this far, I give kudos more to her. I have been a public person, in public sphere for long. By 1990, I was already a supervisor in Onitsha LGA, even before marriage. I can’t just remember any particular issue, but I know we were able to overcome issues as they arose then.

So, I was quite close to my mother in-law, I can’t really remember any serious quarrel because she was always there for me to fight the battle, I can’t place any major quarrel I had with my husband.

Dr Chinyelu: He likes cassava fufu and bitter leaf soup. He can eat it for one week without complaining.

Chief Basil: She loves rice and chicken meat. With that you have gotten her.

Chief Basil: Patience, understanding and more importantly, for a man like me that is always on the move, there is nothing a man cherishes so much than leaving your homestead and coming back to meet it improved even in your absence.

At times, I may not be around for weeks and still come back to meet a neat and suitable home. That is the greatest of all her attributes, to hold firmly the homestead. That’s in itself is God given.

Dr Chinyelu: He is a man who loves his family so much. As he said, he’s always on the move. He doesn’t fail to call us on phone once he wakes up in the morning and before he goes to bed at night.

Like this period, he’s stressed up but he must make out time for his family matters. He fulfils all his responsibilities. So, he’s a man that loves his family despite the nature of his job.

What areas would you like to see an improvement in your spouse?

Dr Chinyelu: In his hot temper, but I have used prayers to calm that one down.

Chief Basil: I think, she is a perfectionist. I don’t know exactly where I will like her to improve much. She prays most often and there is a saying that he who is closer to God is closer to everything. She is so good that I hardly pinpoint a particular place where I want her to improve.

Your advice for young bachelors intending to marry?

Chief Basil: The moment you are due for marriage, there is no need of waiting to acquire everything before you get married. I delayed a little in my own case. I got married when I was over 30 years because I was waiting to have enough. And you can never have enough.

More importantly, God must come first in whatever thing that you do. My advice for the upcoming ones is that they should not wait until they have accumulated wealth. Secondly, you must realise yourself first after which you begin to look for a better match. Then, you should be open to your wife to be, you should not hide anything from her.

Dr Chinyelu: I keep telling them that there is difference between marriage and friendship or courtship. One needs to be prayerful – that is the only key to success. First, try and trust the man because most of all these divorce cases are from lack of trust. They should avoid hearsay and talking from both sides of the mouth.

SEE ALSO: Bishop And Mrs. Elom Share Secrets Of Their Happy, Enduring Marriage Of 25 Years In spite Of The Challenges That Arose In The Early Years Of Their Union

What can new couples do to make their marriage last?

Dr Chinyelu: A woman is key to a happy home. Women should be prayerful and submissive to their husbands. When a woman is submissive, the outsider may think that the woman used charms to hold the husband.

If a man loves you he can do anything for you if you are submissive. Be submissive, love your husband and stop all the side attractions like weekend parties and clubs and avoid bad friends.

Some women want to attend every birthday party. They don’t take good care of their children. They get new clothes every week without considering the income of the family. No man likes that type of woman as wife.

Chief Basil: Couples should try to develop trust because once you trust each other, you will be able to accommodate each other. Secondly, be open to each other and there shouldn’t be any hidden agenda. The left hand should know what the right hand is doing and vice versa.