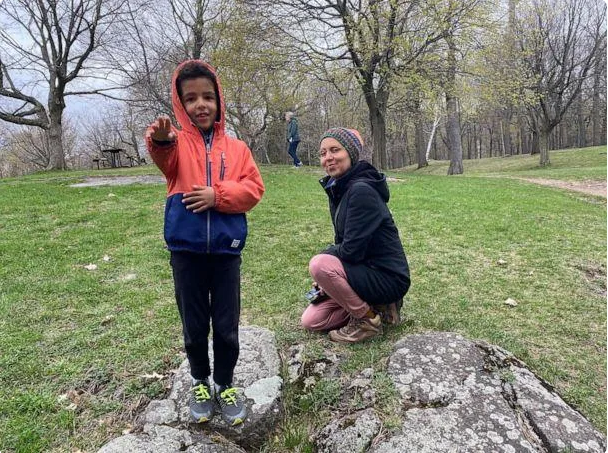 Dr. Nadia Chaudhri who is in the final stage in her fight against ovarian cancer shares what she wants women to know about the deadly disease.

The 44-year-old neuroscientist and professor from Montreal, Canada, has been battling Stage 3 ovarian cancer for the past year, undergoing a hysterectomy and several rounds of chemotherapy.

In May, Chaudhri, the mom of a 6-year-old boy, was hospitalized again and learned the cancer had returned, forcing her to tell her son that her cancer was now terminal.

She shared on Twitter this month that she is now receiving palliative care and preparing herself and her family for the reality that she will not be “coming home from this hospital visit.” Her tweet read:

“I am flooding my Sun with presents. Anything that will remind him of Mama. Today as he left the hospital he said ‘see you tomorrow, although you might also be dead.’ That hurt until I realized he knew I wasn’t coming home from this hospital visit.”

Chaudhri is using her time in the hospital to send a powerful message to women about ovarian cancer, which causes more deaths each year than any other gynecologic cancer in the United States, according to the Centers for Disease Control and Prevention (CDC). She wrote:

“Ovarian cancer comes in many forms & treatments are more advanced for some forms than others, but he bottom line is that ovarian cancer research is underfunded. We also need more awareness of symptoms because early detection improves prognosis dramatically.”

Chaudhri’s six-month journey to an ovarian cancer diagnosis began in January 2020 when she started to feel symptoms like fatigue, abdominal pain, lower back pain and changes in urination.

After being treated with three courses of antibiotics for what was misdiagnosed as a urinary tract infection, Chaudhri said she continued to have symptoms like fatigue and abdominal pain.

The topic of cancer only came up once she underwent a second ultrasound. She showed the results to her uncle, a gynecologist, who suggested a blood test for cancer markers, which led to further tests, according to Chaudhri. She wrote:

“Two weeks later I had a laparotomy. They cut me open from sternum to pubic bone. Indeed, I had cancer. They removed all of the visible disease in a four hour surgery. It happened on June 10 2020. About 6 months after I first started ‘feeling bad.'”

READ ALSO: Women’s Health: Subtle Signs Of Ovarian Cancer That Might Be Easy To Miss

“In January 2020 I started feeling unwell. I was tired, had vague abdominal pain, severe lower back pain & a mild increase in frequency to urinate.”

Chaudhri went on to describe the details of her treatment for ovarian cancer, including multiple rounds of chemotherapy and several attempts at clinical trials. Chaudhri urged women:

“Know your bodies. Pay attention to fatigue and changes in bowel/urinary tract movements. Make sure you understand all the words on a medical report. Do not dismiss your pain or malaise. Find the expert doctors.”

What women should know about ovarian cancer

Ovarian cancer originates in the ovaries, which make female hormones and produce eggs, or in the nearby areas of the fallopian tubes and the peritoneum, the tissue that lines your abdominal wall, according to the CDC.

Ovarian cancer can affect females of all ages and races but is most common in women ages 63 and older and is more common in white women than Black women, according to the ACS.

While early signs of ovarian cancer can be vague, the main symptoms are abdominal pain or pelvic pain, bloating and an increase in urination, according to Dr. Jennifer Ashton, ABC News chief medical correspondent and a board-certified OBGYN.

“If these symptoms or others last for more than half the month you want to alert a gynecologist and, again, talk about the fact that it could possibly be ovarian cancer,”

SEE ALSO: CNN’s Chief Anchor, Christiane Amanpour Publicly Opens Up About Her Battle With Ovarian Cancer To Help Other Women

It is particularly important for women to pay attention to symptoms of ovarian cancer and speak openly with their doctor because there is currently no reliable way to screen for the disease, according to Ashton.

In some cases, targeted use of pelvic scans and sonograms or a CA-125 blood test may be used to detect ovarian cancer, but additional testing is “not one size fits all and it is not recommended for all women,” explained Ashton.

Treatment for ovarian cancer usually involves a combination of surgery and chemotherapy, according to the CDC.

While there is no known way to prevent ovarian cancer, there are things associated with lowering the risk of getting ovarian cancer, including using birth control for five or more years, having given birth, breastfeeding, having had a hysterectomy, having had your ovaries removed and having had a tubal litigation, according to the CDC.