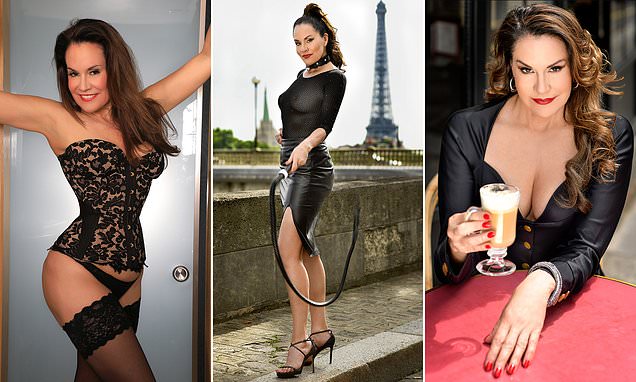 The 49-year-old in a recent chat opened up on why she loves sleeping with married men.

Explaining why she gave up traditional dating for trips to out-of-the-way restaurants and secret texts, Lee revealed that she has had “affair after affair” with numerous married men after 4-year relationship ended in 2017.

She went on to reveal that the married men she has dated have spoilt her with gifts, describing the experience as exciting and also disclosed that she feels no remorse even when called a homewrecker.

Lee who was once happily married but lost her husband to cancer, stated that traditional dating has repeatedly made her miserable.

Sharing her girl code story, Lee opens up to The Sun;

“Ever since my four-year relationship ended in 2017, I’ve had affair after affair with numerous married men.

From top businessmen to hoteliers, they’ve lavished me with gorgeous gifts including Agent Provocateur undies and fancy perfumes.

My lifestyle has enabled me to enjoy male company and exciting sex without putting up with the mundanity of “normal” life — rows over who’ll take the bins out and dreary chat about childcare.

At this point I’m not sure I could bear that. Some people might be ashamed or fear judgment about being a serial mistress, but I’m open about what I do — I own my life choices.

But make no mistake, I know many, many people don’t like it — that has been made clear.

On one occasion a pregnant acquaintance heard I was seeing a married man and turned on me. She launched herself towards me, bump first, at an event and accused me of being a homewrecker.

She need not have worried — there is no way I’d have gone for her man. I think about the people who criticise me and wonder: “Are you happy at home watching This Morning? Or don’t you crave excitement, like me?”

Because dating married men is exciting, with trips to out-of-the-way restaurants and secret texts.

While most of my affairs blur into one, there are a few blokes that have stood out — I have been lucky enough to be with some truly amazing men.

There was one man who was once a meditation guru in the mountains of Switzerland before he went into finance. He would whisk me away at a moment’s notice. I became such a frequent flyer with him that the cabin crew had memorised my drink order.

During a trip to Marrakech, he took me shopping in the markets and bought me gifts worth more than £150,000 in one weekend — and that wasn’t even out of the ordinary.

SEE ALSO: Here’s Why This Nigerian Girl Believes Married Men Are The Sweetest To Date

There was another occasion when one of my lovers thought we’d fallen out so he went to ­Harrods and bought me a beautiful Cartier bracelet, ­costing £25,000, to apologise.

The funny thing was I had no idea we’d had a bust-up. I had just been out of signal so hadn’t responded to his messages but I am happy to deal with the occasional bicker when it leaves me dripping in diamonds.

You just don’t get that frisson of excitement in an ordinary relationship when you’re debating what kind of takeaway you should get as a treat.

I should know, I wasn’t always a mistress. I was once happily married, but at 31 I lost my husband Rob, a computer business owner, to cancer.

It is quite possible that losing the love of my life pushed me towards more casual relationships as I suffered huge amounts of separation anxiety when he died.

I think it’s beautiful to be able to get married, have children and have that marital bliss — but there are a lot of us who don’t need that. Being a mum was never my priority.

I have more fun having affairs, which can still be quite long-term. There’s one man I’ve been in contact with for over ten years.

I have tried traditional ­dating but it made me so miserable. Once a year I will give Tinder a go and I end up suffering badly.

Single men look at their phones constantly, they brag about their conquests and spend a suspiciously long time in the loo — it’s terribly ­unattractive and feels a bit demeaning.

Whereas, with married men, often the sex has gone at home, therefore I am their only lover and I don’t have to compete with anyone.

They’re excited to eat at restaurants they would never normally eat at, they order caviar washed down with vodka with names I can’t ­pronounce.

I never ask for gifts, I never ask for fancy food, I always bring cash for a taxi. Perhaps that’s why these men like me, because I never expect anything.

Often the sex has gone at home, therefore I am their only lover and I don’t have to compete with anyone.

While they adore my attention, these men often speak very highly of their wives but I never feel as though I’m coming second. Everything might be fine in their marriage but they miss intimacy, which only I can give to them.

It’s for this reason, among others, that I do not feel guilt for my actions.

Lying in bed, having enjoyed sex with another woman’s husband (and I do enjoy it — what I do is a choice), I feel no guilt. I don’t feel a morsel of remorse or even think about their wife or children — I don’t know them.

I would never go after a friend’s man. In fact, I never “go after” any man. I firmly believe that you cannot steal a man unless he wants to be stolen. I simply do not have that power.

It’s naive for people who’ve been cheated on to think “if it wasn’t for that other person”.

If not me then someone else. I do occasionally get caught out by the wives, and I’ll get the odd phone call. I had one woman ring me when she was rip-roaring drunk.

I was polite and respectful. We spoke about her feelings on the phone for 45 minutes and at the end of the conversation she said: “You’re actually quite lovely.”

I always tell the wives that I am not here to cause problems in their relationship, and that they should discuss the issue with their partner rather than me.

People might accuse me of breaking “girl code” but that’s ­simply not the case.

I’m always there for my girlfriends — supporting them when they are down, being a shoulder to cry on and lending them my favourite dresses.

Cheating with a man, I believe, isn’t breaking the code because women cheat too and men who want to be stolen are there to be taken. If you are in a loving, trusting relationship, you do not need to worry.

Nearing 50, I can handle the scorn of other women, but anyone following in my footsteps should know what they’re getting themselves into.

For me, affairs are convenient, they are low drama, and that’s why they appeal. I don’t feel a morsel of remorse or even think about their wife or children — I don’t know them.

But, make no mistake, you must be prepared for the fact that this will not be a happily ever after scenario. A married man has a family he goes home to and is not taking you on holidays at Christmas and New Year.

Find out what you’ll get out of the relationship, otherwise you will get lonely. If you’re looking for love, you will either end up a home wrecker or with your heart broken.

My belief is that people become complacent in marriages and that’s what causes cheating. Both men and women go into marriage looking great and sexy, with all guns blazing. But often, and typically after kids, they get complacent and stop making an effort.

They get out of shape, the sex goes. That’s when they go looking for others — don’t blame me if I’m there to pick up the pieces.”