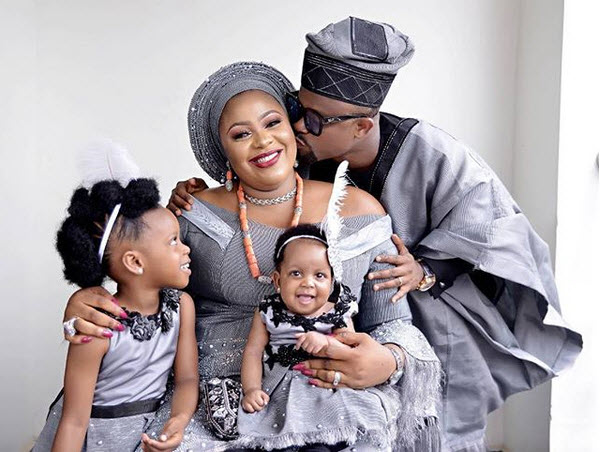 ‘Despite Knowing I Was Impotent, My Wife Accepted My Proposal’ –MFM Pastor, Olumide Oni’s Beautiful Testimony Will Boost Your Faith In God

Popular Nigerian comic actor, Ime Bishop Umoh better known by his alias, Okon Lagos, in a recent chat with PUNCH shares his experience about fatherhood and how it has impacted him.

As a comic actor, one would expect that the dad-of-two would be soft on his two girls but reverse is the case, as he reveals that he doesn’t spare the rod.

Would you say marriage came early for you?

But for me, I think I got married at the time I believed I ought to have got married. But when I was way younger, it was my dream to get married in my mid-20s so that at 30, I would have been done with having children and would use the latter part of my youth to raise my family.

Why did you choose to have a child in the first year of your marriage?

I had my first child in 2014. I have two children now. My wife and I didn’t have to sit down to consider certain things before we decided to have a child. We were done with the consideration before getting married.

There is a belief that pregnant women need lots of attention from their husbands. What was your experience?

I was nervous when my wife got pregnant but as a leader, you don’t show weakness. If you show that you are nervous, it could affect her psychologically. I hoped for the best and expected the worst. And when the demands came, if she said she wanted to eat lion meat, I was ready because I saw it (the demand) coming; it was not like a punch from somewhere. I knew it was just for a short time.

You don’t need to be in the labour room to experience the agony of childbirth and see your wife struggle and grin in excruciating pain just to bring a life to the world, thinking that would make you respect and adore her or treat her well.

You don’t need to see that; I don’t think it’s necessary. I know childbearing is tough. Labour is hard. I don’t have to see my wife experiencing childbearing before I treat her right.

If one has the fear of God and knows there is something called a human being, one should do unto others what they want others to do unto them.

The woman takes the pain of childbirth and may never have her body back because of a decision to be an integral part of a man’s life. I think she deserves some respect.

What was your thought when you had your first daughter?

I thought I was dreaming. I saw a part of myself and it gave me unexplainable joy but I saw it coming. Holding her (my daughter) was like matching fantasy with reality.

Did having a child change what fatherhood meant to you before marriage?

You don’t assume the status of fatherhood until you are a father. We are all fathers to some people but when fatherhood is one derived by blood, it is a different feeling entirely.

Are there certain old habits fatherhood changed about you?

It makes me take calculated risks. I now know that I don’t live for myself anymore. It controls the decision I make, knowing that if I hurt myself, I would also hurt a lot of people.

SEE ALSO: ”I am who I am today because God gave you to me” – See Actor ‘Okon Lagos’ Lovely Birthday Message to Wife

What do you enjoy the most about being a father?

I enjoy the sweet disturbance or trouble from my kids.

What were the most helpful values you learnt from your father?

(Laughs) My father never resorted to physically beating a child. My father was a very good talker. I learnt the virtue of negotiation and not resorting to violence and bullying a child into submission.

He was lovable; he never left any stone unturned in learning anything. I tried as much as I could to imbibe those qualities and see if I could make a direct copy and paste of these virtues. The one I can’t copy, I adjust and see how they can fit it.

As a comic actor, one expects that you would be soft on your kids. Do you spare the rod?

I do not spare the rod but the rod, most of the time, is not a stick, cane or whip. There is some degree of balance in my family. I do not drive corrections with the use of a cane.

If I whip and my wife whips, the adaptive nature of children could make them get used to being whipped, and we would be technically raising tyrants. So, I don’t want to raise kids that would bare their ‘fangs’ and ‘sharpened claws’ at me when they grow up. But I don’t joke with discipline; I discipline my children. I pamper them to a fault at my own peril.

Is having more than four or five kids something you would consider?

I’m okay with three. People’s preferences are different. I don’t like a house full of children. It is better one has a few so one could invest in them, instead of having 15. The ability to train 15 children cannot be the same as when you have to train two.

What do you think your kids enjoy the most about you?

They enjoy the time I spend with them. I rarely have the time but they enjoy my time. I can play, so when we play, it is only unfortunate that my wife is at the negative side of the receiving end because most of the time, the house would be messy. I owe them my time; it is a right, not a privilege. I believe I am not far away from the truth in my submission.

Many men who give their kids the best life can offer have faced trying times and educate their children about the need to work hard. Do you do the same?

In the course of training, you have to be commonsensical in your teaching or what you tell them. I didn’t have a silver spoon in my mouth. So, they are privileged that they wake up in the morning and go to the school they want to go to, eat what they want and wear what they want to wear.

It is because of sheer grace that God anointed and blessed the works of my hands. Some people work hard but do not earn as much as I do. When the grace of God shines on you, He activates the dividends of your hard work and multiplies them and then the success begins to have a fairytale outlook.

I try as much as I can to tell them (my kids) they are privileged. I take them to motherless babies’ homes. I show them children that go to school in tricycles or trek to school and I tell them such children could not be driven in cars because their dads did not have cars to take them to school.

I tell my kids there is no difference between them and a little girl whose hand is held to cross the roads. I tell my kids they get what they want simply because God is good to me by making me successful enough to take care of them.

When my kids tell me they don’t want to experience hardship, I tell them to thank God. I communicate with them and try to make wisdom permeate their minds. With that, one would have a good chance of raising an upright child that would make one proud.

Nigeria turned 61 on October 1; as a family man, what are your thoughts about the state of affairs in the country?

Everyone knows the country is in an absolute mess. That’s the truth. The country can be better if only we have the will. Leadership is not hard; politics is what is difficult. We need a leader that has the will and courage because they would go up against mountains and giants, so they need the courage to run through them like a hot knife running through cheese.

We also need a person that has love for the country. If one has love and compassion, they would not have N100m stacked in their bank account when there are people in the same clime who have no idea about what they would eat the next day.

One who has compassion would not steal just to enrich themselves and their generation. So, if we have that kind of leader, it would be good. We don’t need an Albert Einstein. We don’t need a political juggernaut or a titan.

We just need an ordinary person that has the will to go ahead to do everything right and stand for what is right and just, regardless of whose ox is gored. We need somebody who loves this country genuinely and is moved by compassion.