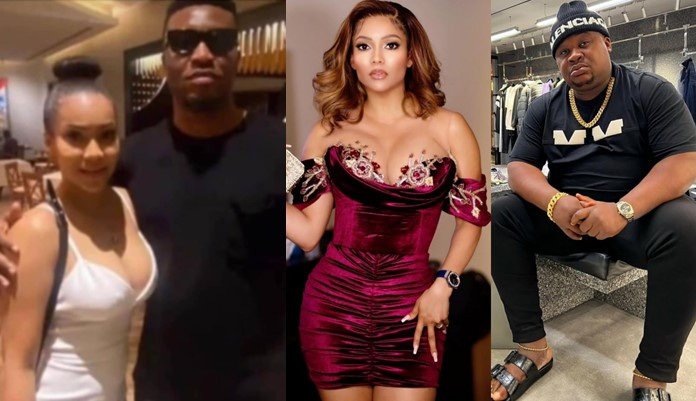 Brother of Kelvin, the married man Big Brother Naija star, Maria Chike was accused of snatching from Cubana Chief Priest‘s sister, Maryanne Onyinyechi has fired back at the socialite.

Kelvin’s brother, Energy Bank slammed Cubana Chief Priest after he (Cubana) shared a video of him (Energy Bank), his brother, Kelvin and Maria hanging out together.

The chief priest had written;

“@mariachikebenjamin How On Earth Will You Threaten A Married Woman Who Has A Male N Female Offspring To Leave Her Husband For You Or Die, You Dey Show Person Husband Watch N Car To Pepper Her, Kelvin Am So Ashamed Of You, All Of Us Dey Street, You No Carry Woman Pass Anybody But We Can Never Make Home Miserable For Our Woman To The Point A Side Chick Calls Your Wife To Threaten Her Life, If What You Re Doing Is Right Why Are You Covering Your Face In Shame In This Video, My Own Na Make Nothing Happen To My Sister, Okwa Mmadu Nwe Ogodo Ewu Na Ata, If Anything Happens To My Sister.”

In reaction, Energy Bank stated that if they publicly start saying what Cubana Chief Priest’s sister did in her marriage to his brother, it will leave everyone in shock.

Insisting that the socialite went too far with the call out post, he added that Cubana Chief Priest knows nothing about loyalty or respect. Energy Bank also attached a video of rapper, Birdman, talking about disrespect.

“Every family get Madman for corner wey just Dey hibernate. Man cheat and Woman been cheating since 1960. If we begin talk wetin your so called sister Dey do inside her marriage for public everywhere go scatter.

Make everybody respect themselves for this social media. @cubana_chiefpriest you went too far with this bullshit. You know nothing about loyalty or respect.”

In another post, Energy Bank revealed that his brother, Kelvin left his marriage in 2018 before Maria came into his life.

He claimed that his brother was “dying in silence” but held on to his marriage for the sake of his children and family.  Energy Bank further claimed that a lot happened in the marriage and they tried to cover it up because they respected Kelvin’s decision to try making his marriage work.

‘I Advised Her Parents…’ -Activist Speaks Up As Mom-Of-4, Sadiya Who Was Detained And Starved By Husband For A Year Dies After Being Rescued

He also alleged that Maryanne drove the husband’s family from their home even though he (Energy Bank) helped build it.

Kelvin’s brother further claimed that though his brother was lavishing his money at a club which was managed by Cubana Chief Priest, he is now the one calling him out.

READ ALSO: UPDATE: Married Man BBNaija’s Maria Was Accused Of Snatching Lied About His Marital Status To Her, Chats Give Insight Into What Really Happened