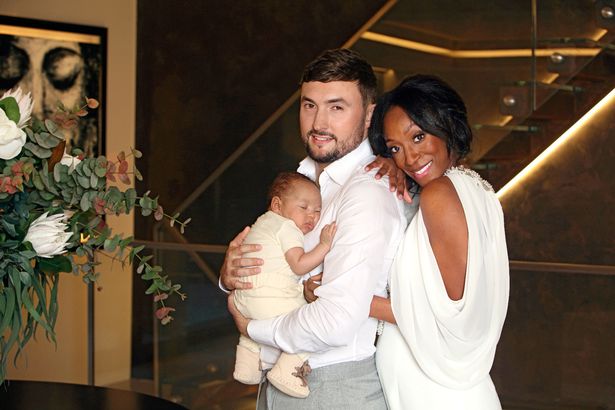 Former Coronation Street star, Victoria Ekanoye has revealed she has been diagnosed with breast cancer just months after welcoming her first child.

The British-Nigerian actress broke the heartbreaking news to OK! Magazine, revealing that she discovered a lump in her breast while feeding her 11-months old son, Theo, who she shares with husband, Jonny Lomas, before doctors investigated it.

“I was diagnosed on October 13 with DCIS, which is Ductal carcinoma in situ. It basically means that cells have turned cancerous within the milk ducts.”

Victoria and her partner welcomed their first son in January this year. She said:

“Théo is so young and the thought of not being here for him isn’t something we even really want to entertain.”

“Back in July I was feeding Theo and I noticed there was a small lump protruding at the top of my left breast. My mum had breast cancer at 41, and her sister at 39 – so many people in my family, in fact.

So I don’t really leave any time before I check these things… I was diagnosed on the thirteenth of October with DCIS, which is Ductal carcinoma in situ. It basically means that cells have turned cancerous within the milk ducts…

We’re being really optimistic, and positive, and really lucky that we’ve caught it as early as we have. I don’t know if lucky is the right word, but that’s how I feel.”

READ ALSO: What 38-Year-Old Mom, Beth Who Discovered A Lump While Breastfeeding Wants Other Women To Know

Victoria also opened up on her three-day labour, with complications due to her sickle cell anaemia.

“With sickle cell it’s not advised to have a birth without painkillers as it can trigger a sickle cell crisis [episodes of pain], so I was induced and put on pain medication. But I had a really bad reaction,”

Victoria confirmed to OK magazine that she will have a “preventative double mastectomy”, hopefully in early December, accompanied by tests “to ensure that the cancer isn’t invasive”. A week prior to surgery, she will also have a procedure called a full body blood exchange.

She is also planning a fundraiser later in November in support of Prevent Breast Cancer and Sickle Cell Care Manchester, in order to “celebrate medical progress with both breast cancer and sickle cell disease”.

Ductal means that the cancer starts inside the milk ducts, carcinoma refers to any cancer that begins in the skin or other tissues (including breast tissue) that cover or line the internal organs, and in situ means “in its original place.”

DCIS is called “non-invasive” because it hasn’t spread beyond the milk duct into any normal surrounding breast tissue. DCIS isn’t life-threatening, but having DCIS can increase the risk of developing an invasive breast cancer later on.