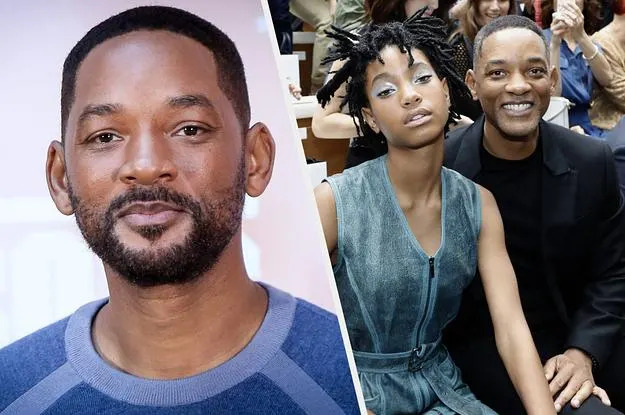 Hollywood star, Will Smith has shared candid details about his journey as a parent and how his children’s rise to fame changed his approach to fatherhood.

Will is father to Jaden Smith, 23, and Willow Smith, 21, both of whom he shares with his wife, Jada Pinkett Smith. He also has a 29-year-old son named Trey Smith from his former marriage to Sheree Zampino.

It’s likely that you’re already familiar with Jaden and Willow, given that they’re pretty famous in their own right.

Both Willow and Jaden have forged successful careers in music, and Jaden has even acted in movies like The Karate Kid and The Pursuit of Happyness.

And, according to Will, it was his kids’ success in the industry that prompted him to totally re-evaluate his parenting style.

During a live conversation with Spike Lee recently, Will spoke candidly about how his children’s rise to fame at a young age changed not only their lives but his, too.

Opening up more specifically about his relationship with Willow, Will recalled a specific memory that he said triggered a “major transition” in his life.

Willow first shot to fame at 9 years old when she released her debut single, “Whip My Hair” back in 2010. The song was an instant hit, and by the age of 10, Willow was touring the world as a support act to Justin Bieber.

And it was on this world tour that Will said he and his daughter shared a “terrifying” moment that changed his approach to parenting.

“I was like, ‘I am parenting the shit out of these kids,'” Will said of his children reaching career heights at such a young age. “I felt like I was doing really, really well.”

Will went on to recall a specific incident when Willow was touring with Justin Bieber in Dublin, explaining that his daughter — who was just 10 at the time — decided there and then that she was ready to take a break.

At the time, Will had proceeded to remind his daughter that the show wasn’t over yet, and that she had to keep performing, to which she responded:

“It doesn’t matter to you that I’m done, Daddy?”

Recalling the events, Will said he initially brushed it off. And it wasn’t until Willow arrived at breakfast one morning with an entirely shaved head that he realized that he had disregarded her emotions back when she had told him she didn’t want to perform anymore.

he said of his sudden revelation, adding,

“It was terrifying. I felt like I had been texting looking at my phone and stepped out into the street in front of a bus and Willow snatched me back.”

“As strange as it sounds, in that moment I discovered feelings,” he added.

He related the experience to his own life, admitting that Willow’s actions had allowed him to see that his feelings were rarely given consideration as a child. He shared further:

“I had to really think about the question she was asking me,” he said of her response when she was asked to keep performing.

“The question she was really asking was ‘Daddy, does it matter to you how I feel?’. It was so explosive in my mind. That was like a deep, existential question.”

Will explained further that he initially perceived parenting as “pushing and prodding and cajoling people into the vision that I had, demanding that people do the things that I had envisioned for them.”

He went on to conclude that his approach to fatherhood completely changed after Willow prompted him to reflect on his own experiences. He said:

“That was a major transition for me in my life. I feel like Willow saved me from what could have been tragic in my life.”

“After that moment, I started to realize… a seed is already a thing: It’s been designed by God and it already is a thing. It’s not my job to demand it be a thing that I need it to be to satiate and gratify my ego,”

he said of his renewed outlook on his role as a parent. He continued:

“My job is to water and nourish and nurture that seed to become what it already is, and to align myself with that seed versus pushing and prodding.”

In fact, Willow gave her own perspective on this experience, revealing that her dad had been “so harsh at certain times” in her early music career.

Speaking on Red Table Talk in 2018, Willow said she felt that her feelings had been disregarded by her family during this time, which subsequently damaged her relationships with them.

“It was a couple of years, honestly. Trying to regain trust for not feeling like I was being listened to or like no one cared how I felt,”

she said of the earliest stages of her career. She added,

“I had to forgive myself because I felt guilty because everyone is trying to make me better, trying to make my dream. But I didn’t really understand what my dream entailed.”

Will’s revelation comes just days after he opened up about another life-changing experience with his kids.

In his brand-new memoir, Will recalled the “heart-shattering” moment that his son Jaden asked to be legally emancipated at 15 years old.

Will and Jaden co-starred in the 2013 postapocalyptic action movie After Earth, which marked one of Jaden’s first major acting gigs when he was just 15 years old.

Sadly, the film was — as described by Will — an “abysmal box office and critical failure,” and inevitably, the backlash put a huge strain on their relationship.

In an excerpt from his new memoir, titled Will, the actor revealed that it was his son who took the brunt of fans’ criticism, explaining that “they said and printed things about Jaden that I refuse to repeat.”

“Jaden had faithfully done everything that I’d instructed him to do, and I had coached him into the worst public mauling he’d ever experienced,”

And the severity of the backlash had such an impact on Jaden that he ultimately asked to be legally separated from his parents. Will wrote:

“At 15 years old, when Jaden asked about being an emancipated minor, my heart shattered. He ultimately decided against it, but it sucks to feel like you’ve hurt your kids.”

Will went on to detail the lack of trust that Jaden had in him following the barrage of negative reviews and the film’s overall failure.

“We never discussed it, but I know he felt betrayed,” Will wrote of his relationship with Jaden. “He felt misled, and he lost his trust in my leadership.”