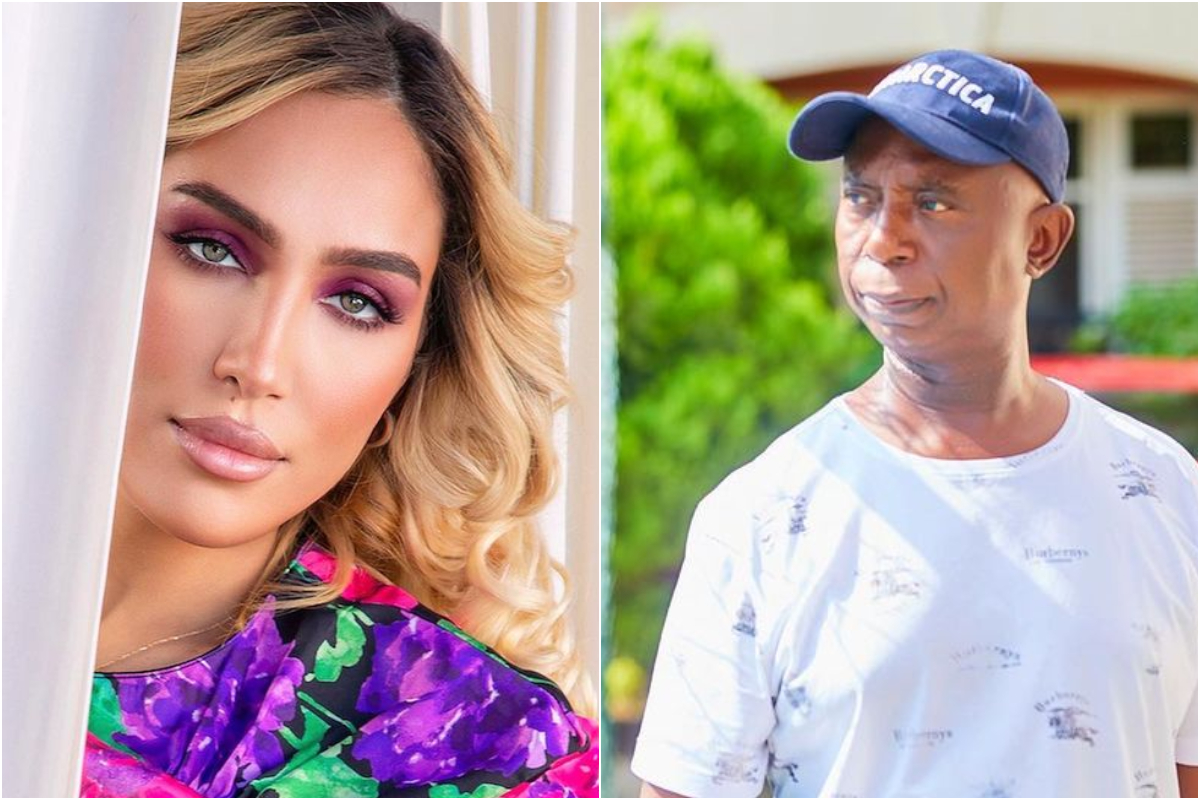 Billionaire businessman, Ned Nwoko, has finally broken his silence on his separation from his wife of 10 years, Laila Charani.

You will recall that last month, Laila, actress Regina Daniels co-wife, took to social media to announce her divorce with the father of her three kids.

Well, in a statement recently released by his media team and shared on his Instagram page, Ned alleged that his marriage to Laila degenerated to irresolvable differences rooted in indecent conducts on Laila’s part.

According to the statement which was tagged “The truth about Ned Nwoko’s separation with Moroccan wife”, the marriage ended after Laila underwent plastic surgery without telling her husband about it, spent money she was given for their kids’ summer holiday in London on herself and also had a physical meeting with a “strange man” who she met on the internet in a hotel in the European country.

It was said that the mom-of-3 was seeing another man while being married to the philanthropist. It was further alleged that Laila severally abandoned her kids in London to go clubbing and beat up the children when they told their father about it.

Ned stated that Laila’s defence all these while has been that “someone set her up”.  Alleging that his ex-wife maltreated their children, exposed them and engaged them in an indecent behavior which “no reasonable man will tolerate as a husband”, the former lawmaker stated that the clarification became necessary because Laila has continously played the victim while she is reportedly the aggressor.

“The truth about Ned Nwoko’s separation with Moroccan wife, Laila.

The attention of Prince Ned Nwoko’s Media directorate has been drawn to a publication trending especially in the social media linking his separation with his Moroccan born wife, Laila Nwoko, to the influence of a local aphrodisiac called “Kayamata”, vended by one Hauwa Saidu Mohammed, commonly known as Jaruma.

Our initial reaction was to have completely ignored the silly insinuation. But given the pervasive nature of fake news and the tendency of mischief makers to peddle misinformation on the social media, we resolved albeit reluctantly, to clarify issues for two reasons:

Falsehood gone viral, need to be dismantled in order not to create wrong impression before unsuspecting members of the public. More importantly, Prince Ned Nwoko with his global reputation as a foremost philanthropist, distinguished patriot and conscientious billionaire business mogul can never allow shallow tale mongers to impugn his impeccable character and pedigree.” 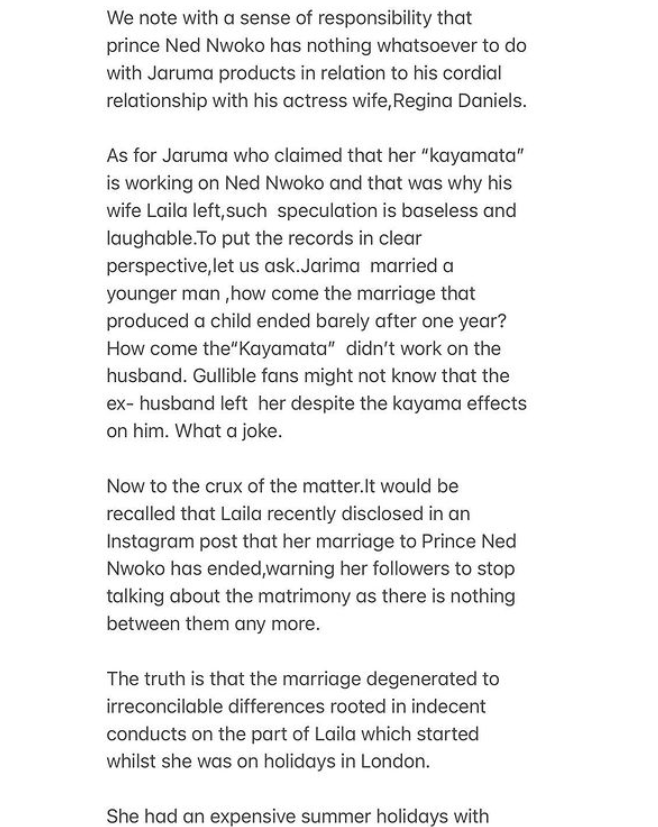 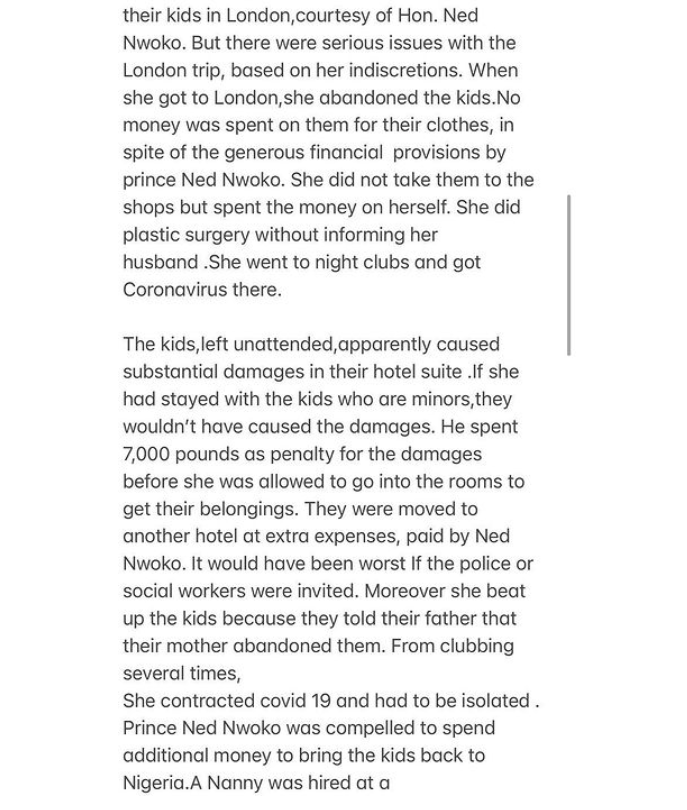 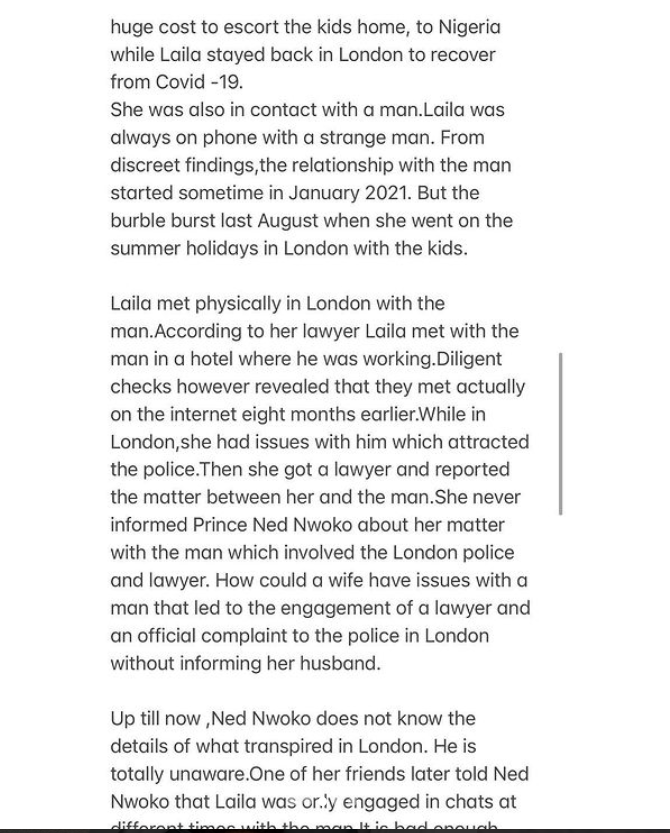 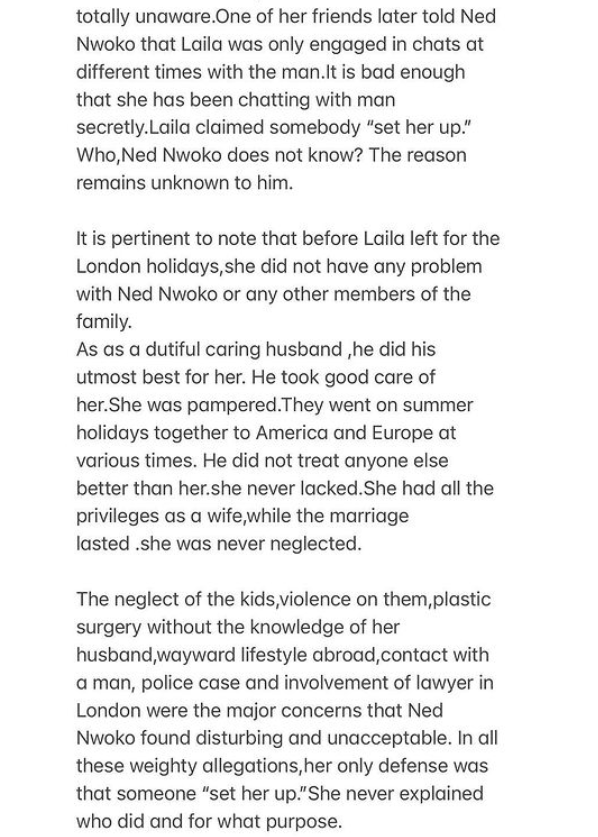 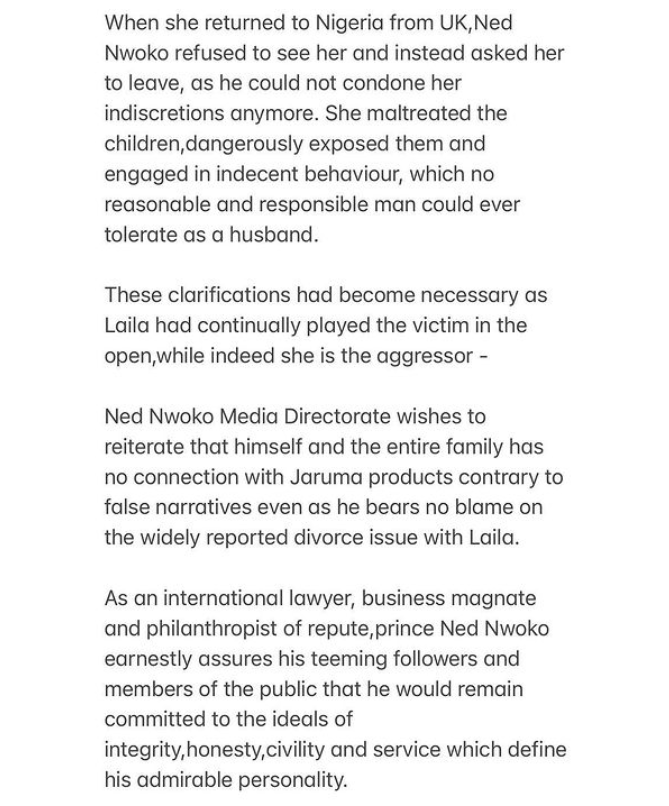