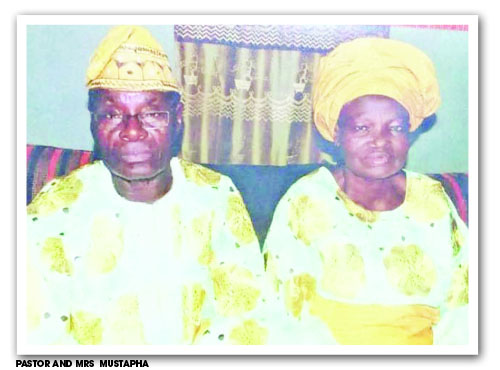 Samuel Ayodele Mustapha, and his wife, Esther, serve as pastor and assistant pastor, respectively, with the Redeemed Christian Church of God.

DailySun visited the couple in Oke Odo, Lagos, and they share a lot with the old, the young, and intending couples on what it takes to live a happily married life. Enjoy!

You ought to be celebrating your golden jubilee in marriage. What has the journey been like?

Pa Mustapha: We met each other in 1970, and like child’s play, everything came to reality, and we got married in 1971.  We didn’t wed in Lagos but in Abeokuta. When we came back to Lagos, we were staying at 55, Tapa Street, Ebute Metta then, I called her in the evening, around 8pm, and told her my dislikes. She also told me all her dislikes.

We decided to work with them as our guide. I told her that the day I raised my hand to beat you, that would be the end of our marriage. Honestly speaking, since 1970 I have never raised my hand on her. It is not that she doesn’t offend me. But God has been helping us, and we have been able to maintain the standard till today.

Like we usually teach these new couples, there is no perfect marriage anywhere. The husband should know that there is no perfect wife, and vice versa.  So, we commit our ways into God’s hand, who is the author of marriage. This is what we have been doing and He has been helping us.

My wife is not someone who is that much interested in sex. But any time we meet, God would just perfect it, and she would be pregnant. That is how we had all our children: male and female.  We did not use any fertility drug. Love in marriage is very essential. The Bible says that love covers multitude of sin. If you love your wife, no matter what she does, you won’t feel the offence.

Pa Mustapha: In our church, Redeemed Christian Church of God, we were taught not to marry because of wealth of the girl’s family, her beauty or anything. Even before you see someone that you want to marry, you should have been praying to God, committing your ways into His hand, asking for His direction.

What was your reaction when he asked for your hand in marriage?

Ma Esther:  I was living in Abeokuta that time. They told me that somebody was interested in me. When he came, I liked him.

Was there any opposition from any quarters?

Pa Mustapha: None. I remember that my friends with whom I used to move together in those days used to call me eunuch. This is because I would follow them to their girlfriends’ houses. But I never had any. So when I told the chairman of our group, late Jimoh Salami, that I wanted to get married, he never believed me. He asked whether I was serious.

I said yes. He asked me where the lady I wanted to marry was living. I told him. He volunteered to follow me to the woman’s house. He did this to know whether I was serious because they all believed that I could not perform; that that was why I did not bother to have girlfriends.

When we got there and they warmly welcomed us and started entertaining us, he wondered whether he was dreaming. When my wife had a baby, if not that the boy resembled me, they wouldn’t have believed that I fathered him. They were all shocked when they saw that the baby resembled me.

SEE ALSO: Drawing Inspirations From Their 25 Years In Marriage, The Omorebokhae Dish Out Advice On Matrimonial Challenges To Couples: ‘We Lost Our Jobs 5days After Wedding’

What has kept this marriage going?

Pa Mustapha: It’s God. There is no power in man. No man is perfect but with God you can’t make mistakes because He never makes mistakes, and He never fails.

Let me ask you the same question that I asked your husband: how has it been?

Ma Esther: When we got married, we came to Lagos and started living in Ebute-Metta, Lagos. God was faithful in blessing us. Along the line, we started having children. When I had my first child, there was a woman from the church that used to come and check on me. She also assisted me in taking care of the children.

Did you experience any early marital challenges? If yes, how did you surmount them?

Pa Mustapha: The fact that she told me her dislikes has been my guide. So if you tell me now that if I pinch you, you will be highly annoyed, I will try not to pinch you no matter what you do to me. This policy has been encouraging us to move forward. It does not mean that we don’t offend each other.

If I offended her in the afternoon, she would call me later in the evening to say that I offended her. I would then apologise. This little word “sorry” that some people do not take seriously has destroyed a lot of homes. When you are too arrogant to say “sorry” to your spouse, you damage your home.

As a man, if you offend your wife, there are many ways to say sorry. You don’t need to prostrate to her. You can hug her; she is your wife. If it is someone who likes kissing, kiss her. As you are apologising, she is happy. If you know how to deal with women, you will enjoy them; they are very good.

Ma Esther: We had challenges, especially in the area of finance. We were not rich but one thing that helped us was that, whenever my husband collected his salary, he would not spend the money anyhow. Since he is not a womaniser, he would bring the money home and we would be able to plan with what we had. This was what helped us to be able to get to where we are today.

Pa Mustapha: She is a mother. She is like her mother, very kind. Her mother made us stick together. She does for me what my biological mother used to do for me. My wife resembles her mother.

Though she has her shortcomings, but if it were possible to take out one of her eye and give it to me, she will do it. That makes me to love her  the more. If you come closer to us, you will know that I am not exaggerating.

Ma Esther: He is tolerant and cares for the home. He is a thorough family man. He is like Abraham that took good care of his home.

What’s special about your spouse?

Ma Esther: He is an upright person; once he says yes, it is yes, and his no is no. He does not smoke, drink or womanise.

How do you know when she is angry?

The Unusual Love Story Of This Couple, Jasmine And Macauley Will Definitely Warm Your Heart

Pa Mustapha: I see it in her eyes. Immediately I look into her eyes, I would know.

How were you able to take care of the kids when they were growing up?

Ma Esther: When my husband was working, I used to do some trading. So what I used to do was that when the children were not many, may be one, I would carry the child on my back while hawking. But when they became many, I would cook for them, assist them with their homework before going out for my business. That is, after they must have come back from school.

Have you ever thought of walking out of this marriage for any reason?

Ma Esther: In marriage, there are challenges and there is no how you won’t experience them at one time or the other. And of course, there are times that you would think of walking out of the marriage. But tolerance and God’s factor always play out.

In my own marriage, we have more of female than male children. That alone was enough for my husband to send me away. But he did not do that. He did not use that to maltreat me. Instead, we joined hands to train our children even to the university level. All our children are graduates.

Ma Esther: When we newly got married, his best food was eba with vegetable soup or ewedu, but now that we are getting older, his favourite food has changed. It is now more of wheat. And, you prepare it as solid, with ewedu or vegetable soup. Now, he eats wheat bread.

What can you say to young girls that want to get married?

Ma Esther: Money should not be your focus. If you make money your focus, you could end up marrying Yahoo Boys, killers, ‘ritualists’ or people who, when they become poor would maltreat you and send you out of your matrimonial home. But if you make God your focus, He will direct and guide you.

When my husband and I were dating, I did not throw myself at him. I kept my virginity. So when we got married, on our first night, when my husband discovered that I was a virgin, he gave me one pound, one shilling.  So it is good for a woman to keep herself. If you do that and commit your ways to God, all will be well.

Couples that have only girl-children should join hands and train them. This is because they may not know what those girls will become in future. I have more girls. But I am happy today because I and my husband joined hands to train them. And they are all doing well.

Do not send your wife away because she is giving birth to only girls. Or leave the children alone for her to train because they are only girls. Some men would even remarry and start to maltreat the woman if the second wife eventually gives birth to male children. This is wrong.

ALSO SEE: The Fakunles Offer Some Words Of Wisdom From Their 46 Years In Marriage | Interesting Read!

What’s your advice to young men who want to get married?

Pa Mustapha: God is the author of marriage, and He says in the Bible that He created woman for man, not man for woman. So He knows who He has created for you. That is why you will need to commit your way to Him the moment it gets into your mind to get married.