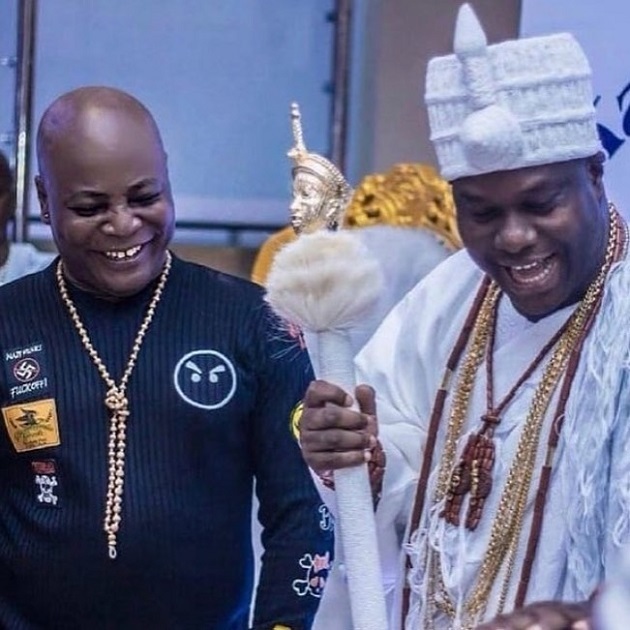 Charles Oputa, better known as Charly Boy or Area Fada, has some questions about the Ooni of Ife, Oba Adeyeye Ogunwusi,’s marital crisis.

The dad-of-five and grandpa who has been married for over 40 years shared a photo he took with the popular monarch and he asked how a man of his status can be dumped by his wives on social media.

“See dis my fine bobo. How e come be say in less dan 2months, two of ur wives just divorce u and ran away from ur kingdom.

“To add salt to injury, na for Instagram dem divorce u.

“True true, all dat glitters is not gold. My people, how una see dis matter? How come wives just take off without notice, e good so?”

Last week, one of the Ooni’s wives, her Majesty, Olori Silekunola Naomi confirmed the end of her 3-year-old marriage to the monarch and cleared a few things up.

The mother of one in a lengthy post said that her decision to leave the union has nothing to do with the fact that the Ooni of Ife is married to other queens.

“Today I announce the beginning of a new dawn and the close of a chapter. Today, I am a mother to God’s unique gift. I am no longer a slave to my thoughts of perfection.

I, at this moment, announce that I shall no longer be referred to as wife to the Ooni of Ife or as Queen of Ile-Ife but as the Queen of the people and mother of my adorable Prince,”

her statement read in part.

Mixed reactions trailed her post as many wished the Queen would return to the palace while others wished her well for summoning the courage to speak up and walk away.

According to a report by controversial self-acclaimed Nigerian journalist, Kemi Olulonyo, it has been predicted that the current Ooni cannot survive with one wife.

Kemi Olulonyo further references the previous monarchs of the Ife Kingdom, Sijuwade and Aderemi, stating there was no “nonsense as monogamy in the palace”.

Kemi, in her post, revealed that the Queen is not ready for polygamy, stating clearly that the Ife Kingdom can only survive on that. She wrote:

“My king Alaafin of Oyo empire has plenty of wives, old and young, triplets and twins in the palace. The Ife oracle has predicted that Enitan cannot survive with one wife. He must have multiple wives.

The divorced queens cannot stand that. Wake up people and don’t tell me Yoruba history. Ife was part of Oyo state. I personally don’t recognize Osun. Olori Afolashade Ashley and is an entrepreneur and an accountant.

The new queen runs a non-profit organization known as Ashley Adegoke Foundation. There is no such nonsense as monogamy in the palace. That’s the scam part of marriage. Wanna marry a King, get ready for other queens.

Go explore the lives of Sijuwade and Aderemi mornachy in Ife. Enitan also had a daughter at 19yo with a baby mama. He is a King and must have many wives.”

The marriage which was solemnized in 2018, produced one-year-old Prince Tadenikawo. 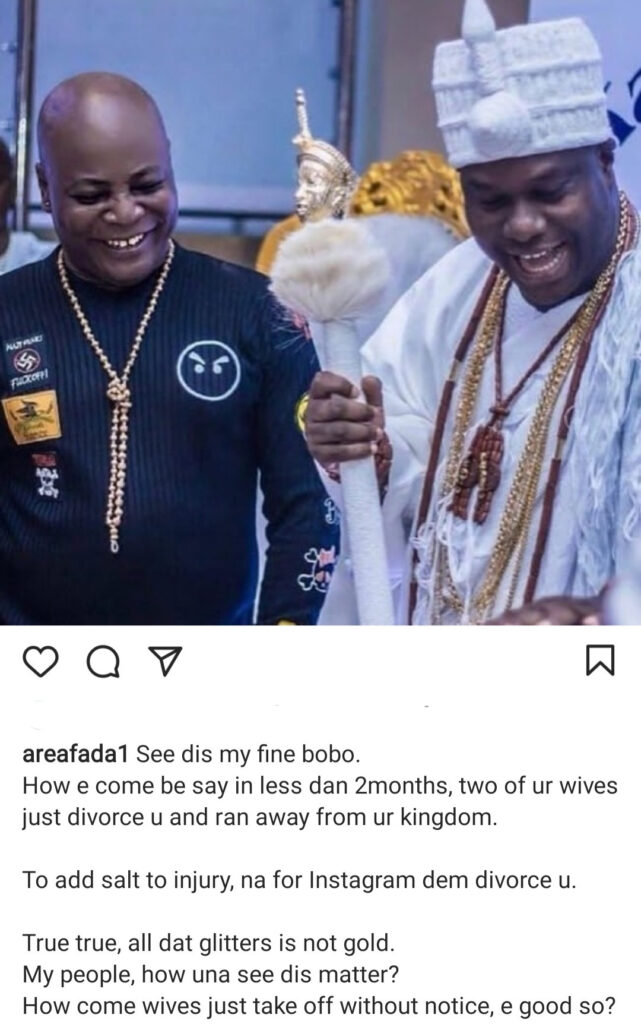