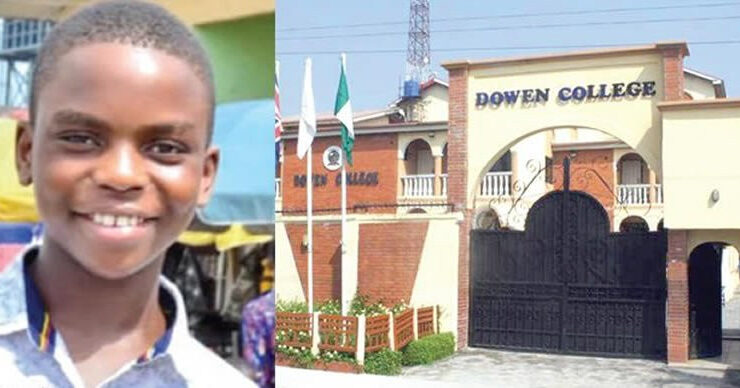 The family of the late Sylvester Oromoni Jnr, a 12-year-old student of Dowen College, Lagos State, who was allegedly murdered by school bullies, has accused the Lagos State police command of “hoarding” the second autopsy result of the corpse.

This was made known by Perris Oromoni, a relation of the deceased student. Perris, who made the claim while remembering his cousin’s death one month after, also stated that while the house masters of the school are still locked up, the “killers” have been released on bail.

He, however, praised senior lawyer, Femi Falana, adding that if not for him, the case would have been closed like many other cases. He also said the family needs clarity on the court date from the authorities.

“Today’s made it a month since my little cousin here was brutally taken from us. Have the killers been brought to book? Nah, arrested and bailed but the house masters remained locked up. Second Autopsy carried out by the Lagos police is being hoarded like palliative.

“Are we surprised? Nope. This is Nigeria after all. But for Mr Femi Falana, this case would have been closed like many other similar cases. Lots of twists and turns. We need clarity on the court date from the authorities #Justiceforsylvester.” A week ago, the family faulted the bail granted to the suspects by a Magistrates’ court in Yaba. It was reported that the Magistrates’ court granted bail to five students of Dowen College charged with the alleged murder of Oromoni.

The students were admitted to bail in the sum of N1 million each. The suspects had been charged with conspiracy and homicide by the police.

The Chief Magistrate, Olatunbosun Adeola, after hearing the bail application filed by the counsel for the defendants, ordered the defendants to produce two sureties each in like sum.

Reacting, the father of the slain student, Sylvester Oromoni Snr. queried the court’s decision, wondering the rationale behind the bail when the 21 days requested by the police for investigation had yet to elapse.

The bereaved father said releasing the suspects might hinder the investigation, noting that while the family was not against granting the bail, the court should have waited at least for the 21 days to elapse.

“Yesterday I was called that those boys were granted bail by a Magistrate Court in Yaba, Lagos. I said, ‘why?’ I now called the Commissioner of Police, Lagos State and he told me; I was not aware, and that they were not done with the investigation.

“I called the DCP in charge of the case who later confirmed to me that the story is true.

“But it was a surprise to me that the same judge gave them 21 days which expires on the 28 of this month when the police requested for the remand order. The court granted 21 days to keep those boys.

“And the 21 days have not expired, and the court granted them bail. I am calling on President Muhammadu Buhari, the Lagos State Government and the Inspector General of Police to please take note.

SEE ALSO: ‘So Many Kids In Dowen Are Potential Murderers’ -Former Teacher Speaks On His Experience At The School

“And they were even planning that after the 21 days if they are not done with their investigation, they will ask for an extension. I am surprised that the court granted them bail when the date given has not elapsed.

The defendants were on December 9 remanded in a juvenile home over the death of Sylvester, who was allegedly bullied in school for refusing to join a cult.

He later died from injuries sustained from the alleged attack and ingestion of an unknown substance.

The police last week released the corpse of Sylvester to his family for burial. This was after an autopsy was conducted to ascertain the cause of his death.