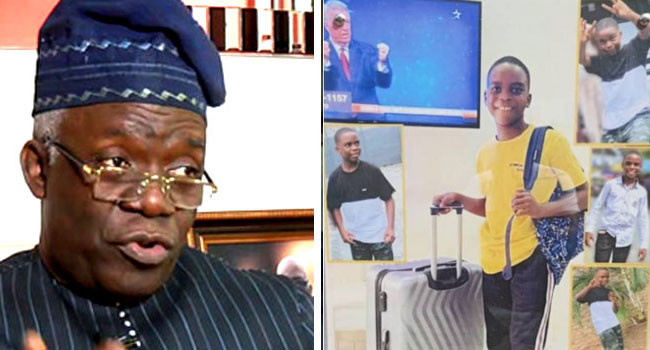 Femi Falana, human rights advocate and senior lawyer, has kicked against the verdict of the Lagos Department of Public Prosecution (DPP) regarding the case against Dowen College, Lekki.

According to him, the legal advice issued by the Lagos State Director of Public Prosecution, Adetutu Osinusi, exonerating the staff and five students of Dowen College arrested over the death of an 11-year-old student of the school, Sylvester Oromoni, was hasty.

Sylvester, a Dowen student, died last year November after he was allegedly attacked by five of his colleagues. The 12-year-old’s father claimed that his son told him that he was beaten and fed a liquid chemical that eventually claimed his life.

But the management of Dowen dismissed the claim, alleging that the boy sustained injuries while playing football with colleagues.

However, Hakeem Odumosu, Lagos police commissioner, ordered a probe into the case while the school was sealed off. Two autopsies were done on the deceased, one by the Delta police and the second by the Lagos police command.

The first autopsy earlier released to the public had revealed that the deceased died of “chemical intoxication”. After a police probe, Odumosu said findings had been forwarded to the DPP.

After then, a Lagos magistrate court granted bail to five students charged with the alleged murder of Oromoni.

The police also released a housemaster and other Dowen staff members, saying the autopsies did not show that Oromoni was murdered by any of the students he mentioned before his death.

In the DPP’s advice released on Wednesday, it was also stated that the toxicology report of post-mortem samples established the cause of death as Septicaemia, Lobar Pneumonia with Acute Pyelonephritis, Pyomyositis of the right ankle and Acute Bacteria Pneumonia due to severe Sepsis.

The state government, therefore, concluded that based on the findings, there was no prima facie case of murder, involuntary manslaughter and or malicious administering of poison with intent to harm against the suspects including Favour Benjamin (16), Micheal Kashamu (15), Edward Begue (16), Ansel Temile (14) and Kenneth Inyang (15) (Read Here).

Reacting to this development, Falana who is the counsel to the Oromoni family, said the legal advice had not laid to rest allegations of murder levelled against the suspects.

He argued that the legal advice was hasty owing to the fact that the Chief Coroner of Lagos State ordered that an inquest be conducted into the circumstances surrounding the unnatural death of Sylvester Oromoni.

The inquest which commenced before the Coroner on December 16, 2021 has been adjourned to January 15, 2022 for further hearing, Falana noted.

“Our attention has been drawn to the report issued by the office of the Director of Public Prosecutions of Lagos State dated January 4, 2022 which has purportedly cleared five students and five employees of Dowen College of any complicity in the death of the 12-year old Sylvester Oromini Jr.

However, the report has not laid the allegations surrounding the gruesome murder of Sylvester Oromoni to rest. T

he report is escapist and hasty as the Authorities are aware of the fact that the Chief Coroner of Lagos State has ordered that an inquest be conducted into the circumstances surrounding the unnatural death of Sylvester Oromoni.

The inquest which commenced before the Coroner on December 16, 2021 has been adjourned to January 15, 2022 for further hearing.”

Also speaking to TheCable on the DPP’s verdict, Falana said it was “loaded with medical jargon” that failed to address the allegation that the deceased was forced to drink a concoction and tortured for refusing to join an unlawful society. He said:

“In a report of that nature, you have to address each of the allegations and eliminate them one by one. Look at the very dubious way of dismissing whether the boy was forced to join a cult or an unlawful society,” he said.

“DPP said they didn’t find any insignia or uniform in the possession of the suspects, hence, there was no unlawful society. Is that how to prove the membership of an unlawful society? They must think they’re dealing with morons.

“Has that addressed the allegation that the boy was forced to drink a concoction or that he was beaten?

“If they found all those diseases [in the autopsy], when did they arise? You said he was injured on a football field.

“What kind of injury? Was there an opening in his body? Wounds can lead to sepsis. How did it lead to his death?

“It’s a very cheap attempt to cover. As far as the parents are concerned, this cannot be the end of the matter.”

Falana also said the Oromoni family will apply for the DPP to defend the report, adding that the probe is inconclusive.

ALSO SEE: ‘So Many Kids In Dowen Are Potential Murderers’ -Former Teacher Speaks On His Experience At The School

“Neither in Warri nor in Lagos is there a lab to confirm poisonous substances [in post-mortem examinations].

“The commissioner of police said on December 31 that they were awaiting the report of a toxicologist. Do they have that report? No. And that is the most important aspect of the investigation. So, the probe is not conclusive.

“This is only the report of the DPP based on the information made available to him. The full facts are not out. We challenge the doctors and the DPP to produce the toxicologist’s report on the substance he was forced to drink.

“Unless you can show that, you haven’t concluded. You can’t just declare that everyone has been exonerated. They just wanted to justify the reopening of the school, which should be announced very soon. That’s all.”