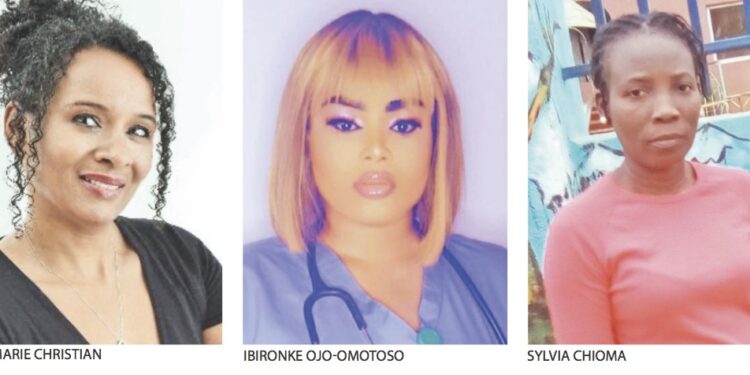 Have you heard of precocious puberty? It is used to describe a condition in which children, both girls, and boys, show early signs of puberty, before age 8 or thereabouts in girls and before age 9 in boys.

Said to be caused by an early production in the brain and release of gonadotropin-releasing hormone (GnRH), some of the symptoms include rapid breast growth and first period in girls; enlarged testicles and penis, facial hair and deepening voice in boys; pubic or underarm hair and rapid body growth, including height and weight.

Other findings that you might notice are that girls are much more likely to develop precocious puberty than boys; the phenomenon appears to affect Africans or members of the black race more than children of other races; children who are significantly overweight or obese are at a higher risk of developing it more than others.

About five months ago, officials of the Lagos State Police Command arrested a man simply identified as Adegboyega for brutalising his 8-year-old daughter following early signs of puberty.

The report has it that the victim’s left breast was completely cut off by her father after he allegedly used a hot stone to massage her breasts. He did this, it was said, to stop the breast from growing. When asked, he blamed his wife for his action. He was alarmed, he said, by how his daughter’s breasts were developing very rapidly.

Whether it is the wife that pushed him into the act or not, there is nothing to show that the couples nor the police that carried out the man’s arrest nor the girl victim herself had ever heard about anything called “precocious puberty.”

And yet, the man in the eye of the storm had to deal with it in his own way, by using what is generally known as ‘breast-ironing.’

It is a brutal traditional practice that involves the use of hot stones by women of the older generation to batter their daughters’ breasts in order to stop them from growing rapidly. It is done by adults to prevent younger females from developing so fast as to warrant men finding them sexually attractive.

But Daily Sun investigations show that, contrary to what may be the general thinking of the law enforcement agencies involved with the Adegbogbeya matter, breast-ironing is not an isolated case but a widespread practice that has gone on unreported for a long time. But thanks to Daily Sun’s connection with a non-governmental organization (NGO) paying the issue more than perfunctory attention, a window is now being created into its perverseness, especially in Nigeria.

Daily Sun findings show that young girls between the ages of nine and 15 are most at risk. They also show that undergoing such a ritual damage the victims’ social life and psychological health owing to the trauma it causes.

It ruins their self-esteem, and most times, as a result of the deep pains they feel, the practice destroys their self-confidence and leads to self-hate.

Older female figures who engage in this awful act do it in secret places, away from men and possibly the father of the child. The breast of the young lad is massaged for several months depending on the victim’s body resistance. Quite notably, in situations where the breast keeps protruding, the ironing becomes more severe.

Saturday Sun spoke with some girls, who are victims of this practice, as well as some of their parents involved in the act.

Mrs. Janet, who victimized her daughter, claimed that she did so on her mother’s instruction because her husband’s attention was always drawn to her daughter’s breasts.

She narrated what happened:

“I had a daughter before I got married to a second husband. She was ten years old with breasts that developed fast, unlike that of her age mates. I was uncomfortable when, on more than five occasions, I caught my husband ogling at her breasts.”

According to her, she told her mum of her observation. And, instantly, she was ordered to ‘kill’ the breasts, or else they would make the girl go into early sexual encounters with her stepfather or with other men.

Her mum then took her to the market and bought her a stone for use on her daughter, asking her to concentrate pointedly on her nipples.

Two days later, she did as instructed and placed the stone on a fire. Narrating further:

“I felt the heat as I removed it. This was despite the thick cloth that I wrapped around it. She was naked as I placed the stone on her breasts.

Her agonising plea broke my heart so much that I quickly dropped the stone only to see the damage I had done. Her nipples were badly burnt! Till today, I’ve not forgiven myself for doing that to my precious daughter.”

A victim, Miranda Lum, said she was barely ten years old when her mum and aunt traumatized her by pounding her breast in a bid to achieve the same purpose. She recalled her bitter experience:

“My aunt and my mum pounded my chest everyday. I cried ceaselessly and tried to abandon school and flee from home. I still get flashbacks of the ironing. And, each time I do so, my heart beats faster.”

“The men in my place blame girls’ bodies for rape – this is why many mothers iron or pound their daughters’ breasts to make them flat and unattractive to men. I was nine years old when my breasts were ironed. My mum made them flat like a piece of paper.”

Tomis (not real name) from Kaduna spoke thus of her own experience:

“My mum took a pestle, warmed it very well in the fire before using it to pound my breasts while I laid face up. Again, she took the back of a coconut, warmed it in the fire and used it to ‘iron’ my breasts. I was crying and trembling but she didn’t stop.”

An NGO’s take on worrisome development

Concerned experts say that the traumatic experiences that the victims described are real and nothing to be toyed with.

One of them, Sylvia Chioma, a graduate of Public Administration from Ambrose Alli University, Ekpoma, and the Project Coordinator of the Girdle Network, a non-profit organisation that runs an online and field awareness programme to sensitise Nigerians about the complications and criminality of Female Genital Mutilation (FGM) explained that breast ironing which she said originated from Cameroun has spread to parts of Nigeria.

She noted that the practice has gone unreported for a long time. But like Female Genital Mutilation (FGM), it is another harmful cultural practice and form of child abuse that needs to be stopped. She said:

“Breast ironing or breast flattening involves burning and pounding a young girl’s breasts using hot objects, including stones and hammers, over a period of time, sometimes years, in an attempt to stop them from growing. The United Nations (UN) says that breast ironing affects 3.8 million women globally.

Women, particularly girls as young as seven years old, are affected by breast-ironing. In the name of culture or misguided belief of safeguarding girls, people use large stones, hammers, or spatulas that have been heated over scorching coals to compress the breast tissue of girls not to be attractive or less womanly to men!”

She also spoke about the implications of the practice. She said:

“They include unusual or aggressive behaviour from victims – many do suffer from depression or anxiety and often, are withdrawn from others.

Even in school, they are reluctant to undergo normal medical examinations or girls’ sports activities because of the embarrassment or shame of having their damaged breasts or the scars seen by others.

You see, breast ironing not only seriously damages a girl’s physical integrity, but also her social and psychological well-being.”

She explained that apart from the pains it causes, it exposes girls to numerous health problems such as cancer, abscesses, itching, and discharge of milk, infection, dissymmetry of the breasts, cysts, breast infections, severe fever, tissue damage, and even complete disappearance of one or both breasts.

She dismissed with a wave of the hand the argument about the thing being done to protect the girl-child from being sexually molested.

“There had been instances of men raping babies and girls below seven years old – would they say their ‘flat chest’ lured men to them?”,

“The emphasis should be on enlightening boys and men not to rape or sexually abuse or violate girls or women. The bull should be held by its horn; men should be held accountable for sexual abuse instead of blaming girls or their bodies for it.”

Ann Marie Christian, a UK-based international safeguarding consultant and social worker with over 20 years experience, said that “people who practise this believe that the motive behind it is to prevent sexual assault and rape, preserving the body of a child and delaying puberty, allowing the child to continue education and school, avoiding unwanted attention from men and prevent dishonour being brought on the family if the girl has a sexual relationship before marriage.”

But she is of the opinion that making breast ironing illegal and also categorising it as child abuse will be a great way to curb it. She said:

“Making educating communities, teachers, social workers, police, children, relatives, faith groups and families aware of this practice will go a long way in stopping it. Victims should try to confide in someone, raise the awareness, educate others, and contact help-lines.”

Ibironkeojo-Omotoso (RN,RMHN), a registered mental health nurse, described it as a practice that can pose dangerous medical consequences on the victims. She said:

“The practice itself is dangerous as hot stones and electric irons are sometimes used to flatten the breasts. Negative physical effects can include infection, fever (elevated body temperature) and tissue damage (wounds such as scald and burns).

Aside from the fact that breast flattening is a very painful procedure, it violates a young girl’s physical integrity.”