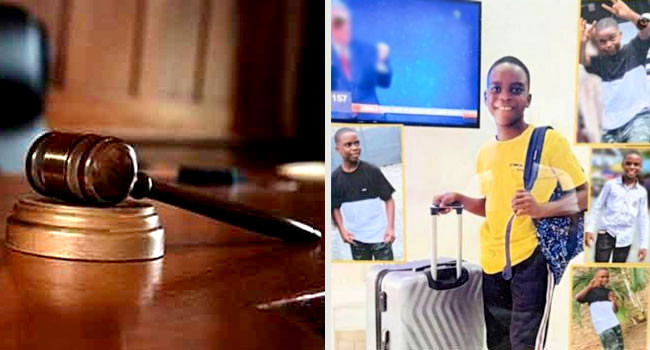 Dr. Mojisola Bisiriyu, a medical doctor employed at the Dowen College, Lagos, on Tuesday, told an Ikeja Corona’s Court that no medical test was conducted on the late student of the school, Sylvester Oromoni before he was taken home on health grounds.

Bisiriyu, the resident doctor at Dowen College, qualified as a medical doctor in 2007.

The doctor who told the court that he had been working with the school for five years, testified that the late Oromoni complained of a hip and not leg injury when he presented himself at the school’s sickbay on November 21, 2021.

According to Channels TV, the doctor was testifying as the 8th witness in the coroner’s inquest to unravel the circumstances behind the controversial death of the 12-year-old student.

The deceased’s father had alleged that his child was beaten by some senior students which led to his death. He also alleged that his son was forced to drink a substance by his attackers. The school however denied the claim, arguing that he suffered an injury while playing football with his mates.

Testifying before Magistrate Mikhail Kadiri, while answering questions from counsel to the Oromoni family, Femi Falana, doctor Mojisola said that she didn’t notice any visible leg injury and the deceased didn’t complain of any.

“As the school Doctor, my duty is to take care of students in the school and for whatever we see that demands attention, we usually call the parents.

I saw the deceased on November 22, 2021, he came in with pain on his right side and that was what I saw him for. He came in with a limp and no other complaints.

I spoke with the deceased’s mother, Mrs Oromoni about his health status and she said his guardian will be coming to pick him up the next day.

The school policy states that parents must be informed whenever their children are sick because some parents have specific hospitals they want to take their children to.

We only refer serious cases to the school hospital, which is Lifeline Children Hospital in Lekki, Lagos, and it is a three-minute drive from the school.

He told me he fell down while trying to pick his Bible and it was an injury to his hip. It was after much cajoling that he said he played football. We applied pain relief and massaged the part he complained about.”

The doctor who said she works on weekdays from 8 am to 3 pm also clarified that when her shift was over, the student was treated by the resident nurse, Omobola Kayode.

When Mr Falana asked if she was aware that the deceased could barely walk and was “carried” to the car by his guardian on November 23, the doctor said; “He was assisted out of the sickbay,” adding that she also advised his guardian to take him to the hospital.

When Mr Falana asked if she gave the guardian a referral letter to a hospital, the school’s lawyer, Anthony Kpokpo objected. He said that the issue of a referral note should not arise because the doctor does not work in a hospital.

“By your assessment, does the deceased’s health status warrant you taking him to the hospital?”

The doctor said no.

“But it warrants you asking the parents to take him to the hospital?” Mr Falana asked.

To which the doctor answered, Yes.

Referring to the pathologist who had earlier testified in the matter, Falana asked:

“A medical expert, Dr Soyemi told the coroner that all the deceased needed was a dose of antibiotics which would have prevented the unfortunate incident? Do you agree?”

”I cannot answer the question,” the doctor said.

”Why didn’t you apply antibiotics?” The lawyer asked.

The doctor replied: “There was no fever, nothing. You don’t just admit antibiotics. We are not a hospital or a lab. We did not run tests. The complaint was pain in the hip”.

“Do you know whether he was suffering from any disease?” Falana also asked.

“None that I’m aware of,” the doctor replied.

“Are you aware that the deceased was taken home over a twisted tongue in March?” Mr Falana asked.

The doctor said she was not aware. She also testified that even though the deceased still had pains, his lips were not scalding or peeling at the time he was taken away from the school.

Before the school doctor testified, the police investigator, CSP Bamidele Olusegun concluded his testimony under cross-examination from the previous day (Monday).

While answering questions from the counsel representing Dowen College, Anthony Kpokpo, the policeman reiterated his testimony from the previous day that he found nothing in his investigation which suggested that the student died as a result of bullying.

He added that though the three house masters were negligent, passive and failed to take action when cases of inappropriate behavior of some students were reported to them, all of those cases referred to previous cases and not the Oromoni case.

ALSO SEE: ‘So Many Kids In Dowen Are Potential Murderers’ -Former Teacher Speaks On His Experience At The School

The Coroner also had a few questions for the witness. He asked the policeman if he conducted a comprehensive investigation to which the witness answered in the affirmative.

When asked if he investigated claims that the deceased was beaten and given a poisonous substance to drink, the police officer confirmed he did but found no proof of this.

The coroner also asked if he invited the students the deceased played football with as well as his roommates and even students in adjoining rooms.

“The deceased’s room had four bunkers for 8 students including Oromoni. Of the remaining 7 students, I was able to speak to only 4 out of the 7.

I invited all the deceased roommates and even some in other rooms but only 4 room mates showed up. The school had been closed down at the time and some we invited did not show up because their parents said they were going through trauma.”

The Coroner then asked:

”You have informed the court that you queried 4 roommates and that the occupants are eight (Including the deceased), having not been able to interview the other 3 roommates, can it be said or suggested that your investigation into the allegations of being beaten, dragged down from the bed and being given a substance to drink, is not comprehensive?”

“It is not my Lord,” the police officer said.

The coroner has adjourned further proceedings till February 28.