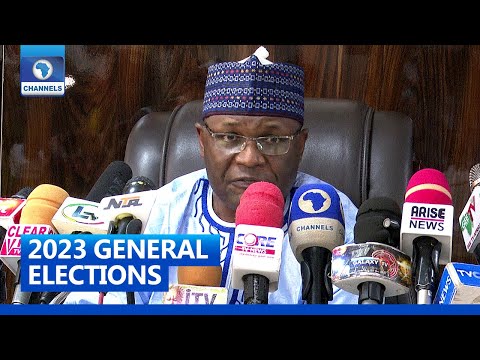 This was announced by the National Chairman of the commission, Professor Mahmood Yakubu at a news conference in Abuja, the Federal capital.

Yakubu explained that the new date is to allow for conformity with the provisions of the Electoral laws which stipulates that elections notice be published at least 360 days before the elections.

The INEC boss also said the Electoral guidelines will also be published in due course.

From the adjusted electoral timetable distributed to journalists, all political parties are expected to conduct party primaries and resolve all disputes arising from the primaries between April 4 to June 3, 2022.

The submission of nomination forms by political parties is scheduled as follows:

See the full statement by the INEC Boss below…

“STATEMENT AT A PRESS CONFERENCE BY THE HONOURABLE CHAIRMAN OF THE INDEPENDENT NATIONAL ELECTORAL COMMISSION (INEC), PROFESSOR MAHMOOD YAKUBU, ON THE RELEASE OF THE TIMETABLE AND SCHEDULE OF ACTIVITIES FOR THE 2023 GENERAL ELECTION HELD AT THE CONFERENCE ROOM, INEC HEADQUARTERS, ABUJA, ON SATURDAY 26TH FEBRUARY 2022

Ladies and Gentlemen of the Press.

2.​ You may recall that in 2017, the Commission decided to establish fixed dates for General Elections in Nigeria. This decision was based on our determination to create certainty in the electoral calendar and to enable all stakeholders in the electoral process (the electoral commission, political parties and candidates, security agencies, observers, the media etc.) to prepare adequately for elections.

Consequently, the 2023 General Election was scheduled to commence on 18th February 2023 with the Presidential and National Assembly elections, followed by the Governorship and State Houses of Assembly elections on the 4th of March 2023.

However, the Commission could not release the detailed Timetable and Schedule of Activities for the General Election, as it normally would, because of the pending enactment of the Electoral Act 2022. The Bill has now been signed into law.

3.​ Therefore, the Electoral Act 2022, together with the Constitution of the Federal Republic of Nigeria 1999 (as amended), form the legal basis for conducting all elections in Nigeria. In particular, the Electoral Act provides strict timelines for the implementation of electoral activities based on the date of the General Election. One of the significant timelines is the publication of Notice of Election not later than 360 days before the day appointed for holding an election which has now lapsed for the 2023 General Election.

4.​ Consequently, the Commission has decided to adjust the dates of the 2023 General Election to ensure compliance with the provisions of the new law. Accordingly, the Presidential and National Assembly elections will now hold on Saturday 25th February 2023 while the Governorship and State Houses of Assembly elections will hold two weeks later on Saturday 11th March 2023. With this adjustment, the 2023 General Election is now 363 days away.

5.​ Under the law, there are critical timebound activities from the publication of Notice of Election to the Conduct of Polls which form the Timetable and Schedule of Activities for elections. Some of the critical activities and their dates of implementation are as follows:

i. Publication of Notice of Election – Monday 28th February 2022.

ii. Conduct of party primaries, including the resolution of disputes arising from them – Monday 4th April 2022 to Friday 3rd June 2022.

iii. Submission of nomination forms to INEC via the online portal for Presidential and National Assembly election – 9.00am on Friday 10th June 2022 to 6.00pm on Friday 17th June 2022.

iv. Submission of nomination forms to INEC via the online nomination portal for Governorship and State Assembly elections – 9.00am on Friday 1st July 2022 to 6.00pm on Friday 15th July 2022.

6.​ The detailed Timetable and Schedule of Activities for the 2023 General Election will be circulated to the media at the end of this briefing. Soft copies will also be uploaded to the Commission’s website and social media platforms immediately. In addition, the Notice of Election will be published in our offices in all the States of the Federation as required by law on Monday 28th February 2022.

7.​ With the coming into force of the Electoral Act 2022, the Commission will work assiduously to conclude and publish new Regulations and Guidelines for the Conduct of Elections that are consistent with the Act.

These Regulations and Guidelines as well as Manuals issued by the Commission are all part of the legal regulatory framework for elections. Their timely publication will enable all stakeholders in the electoral process to become conversant with their provisions as they prepare for the 2023 General Election.

8.​ On this note, I wish to remind stakeholders, especially the political parties, of their responsibility to adhere strictly to the timelines in this Timetable and Schedule of Activities, as well as all other timelines established by the Commission.

It is necessary that all political parties comply with the extant legal framework, ensure proper organisation and management of party primaries and the nomination of qualified candidates in order to prevent unnecessary litigations and rancour.

9.​ I thank you for attending this conference and God bless.