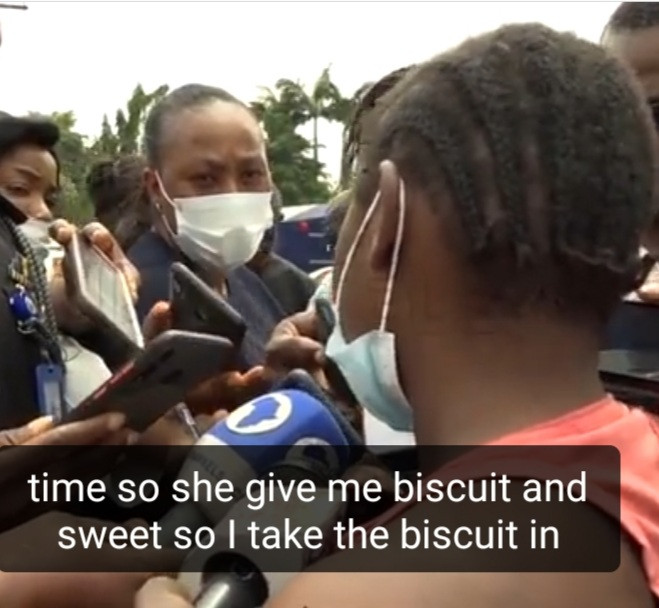 Writer And Mum-Of-2, Ese Walter Gives Positive Update After Calling Out Ex-Husband, Benny Ark For Leaving Their Underaged Kids With His Gateman

Chiamaka Odo, the teenage nanny accused of killing 6-month-old baby in her care has revealed her motive for the killing.

This was revealed by the Lagos State Police Command spokesperson, Adekunle Ajisebutu, during a press briefing held at the Command Headquarters in the Ikeja area of the state.

Ajisebutu said the suspect confessed to being a member of the cult.

“On 6/2/2022, a 14-year-old female nanny strangled her mistress’ son, Jayden Osokolo, kept in her custody to death. The suspect, Chiamaka Odo, confessed to be a member of the Ogoloma cult group in Enugu, Enugu State.

“During interrogation, she disclosed that members of the cult group requested her to bring the blood of the deceased to the spiritual world hence she carried out the dastardly act.”

Speaking with journalist, Chiamaka said she lived in Anambra state before she was brought to Lagos by her uncle, who then found a job for her as a nanny, where she was to be paid N15K per month.

She further revealed that she was initiated into the Ugoloma cult group in Agulu, Anambra state when she was in primary school.

The teenager added that a classmate gave her biscuits and sweet during break and that night, she found herself attending their meeting and they welcomed her.

She said that when it was decided that she would come to Lagos, the cult group told her that they would require blood from her but she refused to shed blood.

Chiamaka began working as a nanny on January 7 in a home in Lagos and she said her cult members began appearing to her again. She said they come to her in a dream and give orders.

Narrating how the baby died, she said they came to her in her dream as usual and they gave her a bowl and told her to call the baby’s name – Obiora Oso Okolo –  four times. When she did, blood appeared in the bowl.

She claims the baby died after that. She further told newsmen that she has been wanting to leave the cult group but can’t. If she tries to go to church, she becomes unable to walk and only gets better when church is over, she said.

READ ALSO: Celebrity Mum, Ufuoma Mcdermott Harps On The Importance Of CCTV In Homes After Her Friend’s Nanny Did This

“My name is Odo Chiamaka. I was brought to Lagos from Anambra but I was a member of a witchcraft group while in our village.

“There is one of my friends called Ameri. She gave me biscuits and sweets and in the night, I found myself in one place. They welcomed me.

“I called the baby’s name four times and blood filled the bath. That is what happened. They come in my dream when I am sleeping. I found myself in Okoloma in Agulu, Anambra State.

“I am the last in the group. I do not do anything and I don’t eat anything.  I came to the house on January 7. It was my uncle that brought me and they said they will pay N15,000 but they didn’t pay.

“I want to leave the cult but I don’t know how to. If I want to go to church on Sunday, I won’t be able to walk again. They will make me tired until church dismisses.”