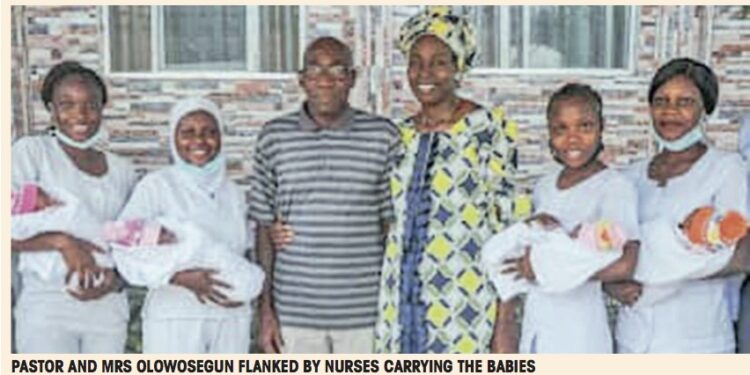 A Nigerian couple has shared their inspiring story after they welcomed their children after 18 years of waiting.

When Pastor Toyin Olowosegun and his wife, Oluwatoyin Motunrayo got married on November 8, 2003, they were looking forward to having a home full of children. But fate had other things in store for them.

The couple experienced delay in conception for 18 years. On December 16, 2021, they were blessed with a set of quadruplets, all girls. The babies were delivered at AnchorMed Hospital in Ilorin, Kwara State.

Pastor Olowosegun is 53 while his wife, the overjoyed mother of the babies is 46. Daily Sun spoke to Mr Olowosegun who revealed that it takes the grace the God to wait for such a blessing.

He noted that it wasn’t easy but that as a child of God who trusts God for every- thing, he looked up to God for help and He came through for him and his wife.

“It was the grace of God that sustained us throughout the 18 years of waiting for the fruit of the womb. As a pastor, you pray for people, they get their miracles and you attend naming ceremonies of babies born in the church while you are still waiting for your own children to come. It was hard but God sustained us.”

The father of the quadruplets who is still basking in the joy of having his own children narrated how everything happened.

According to him, God paved the way for him and his wife through In vitro Fertilization (IVF). He revealed that the first session of IVF failed in 2020 but last year, they decided to try again and the four eggs that were fertilized were carried to term by his wife.

Recalling some of the challenges he faced while waiting for his children, Olowosegun said although pressure came from his family for him to have a child, they didn’t suggest that he should have a child outside his marriage.

“My family wanted me to take some steps which included consulting prophets but I refused. I stood my ground and insisted that God would do for me what He did for others.”

Olowosegun stated that as a priest, he knew that right way to follow but because his family believed in special prayers from some prophets, he reminded them that he was a prophet too and decided to trust God.

Even though he knew their suggestions were from a place of concern because he was getting older, he stood his ground and chose to wait on God.

READ ALSO: Found Love @ 47, Married @ 48 And Welcomed Her 1st Child Before Turning 50, Ladunni’s Story Of Triumph Is Indeed A Proof That Delay Is Not Denial

The father of four said:

“It wasn’t an easy journey for me and my wife. When you see people who got married at the same you did talking about their children in the University, you feel bad.

At times, you feel down when friends and family members are talking about their children and you don’t know how to contribute to the discussion because you don’t have a child.”

According to Olowosegun, the turning point in his journey of infertility came when a family friend sent him over N1 million to start the process of IVF. He said it was painful when it failed. It was like a waste of money but he didn’t give up.

He added that two months later, someone suggested that they try IVF again. Olowosegun said he asked his wife if she was ready to go through the whole process again because she was the one bearing the brunt of the procedure and she said yes.

“Luckily, I had in my possession a loan I took to do something else. We used it to pay for the second IVF process and it was successful. We have our quadruplets to show for it.”

Olowosegun said that when his wife was pregnant, the doctor suggested that one of the eggs that was fertilized should be removed because four of them were growing well. There was concern for his wife’s ability to carry the quadruplets to term because of her age.

“I rejected the idea because I didn’t want anything to tamper with our babies growth. Their presence will make up for the time we waited.

I told them to monitor my wife but they should leave the babies to develop because God allowed the four babies to grow. As long as her body can carry them to term, they shouldn’t tamper with the babies.”

Olowosegun stated that in December 16, 2021, their quadruplets arrived and God wiped their tears and made them forget the trauma of waiting to have children 18 years after they got married.

He shared some of the challenges his wife encountered during her pregnancy. He said at a point, she was admitted in the hospital and the medical personnel were monitoring her and the babies in her womb.

He said she had ultrasound scan done at every hospital visit and that cost a lot of money. She said:

“At a point, she couldn’t stand on her own, there must be somebody at home to help her and then her legs must be elevated whenever she sat down or lay down.

But each time we look at our babies, we forget the pain we went through. The joy of seeing our quadruplets has made us forget the pains and challenges we suffered for 18 years.”