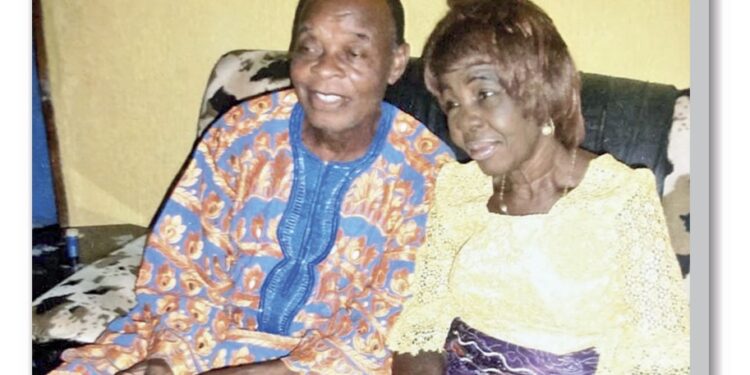 Pa Mathias Kasakwalam Amaechi and his wife, Jane-Charity, from Ndiuhu Autonomous Community of Amuzi, in Obowu Local Government of Imo State, retired to the village in 2006 when insecurity threatened their peaceful existence in Jos, Plateau State where they used to live.

The couple who recently celebrated their 60 years of marriage or diamond jubilee had conversation with DailySun in which they x-rayed their marriage journey as husband and wife.

They also left some pieces of advice for old and newly married couples on how to keep the home front.

How did it start?

Pa Mathias: We lived on the same street then in Jos, now capital of Plateau State.

What was her reaction when you proposed?

Pa Mathias: She was about 16 then while I was in my late 20s. It was really like a child’s play and both of us were spoilt last children of our parents.

Why did you accept his offer of marriage?

Ma Charity: I can’t really say because then most of my friends were single. I think God did it for us.

Did anyone oppose the marriage?

Pa Mathias: No one did. More so, early marriage was the in-thing. She just concluded her Primary 7 as obtained then, while I had just marked my Iwa-Akwa (initiation into manhood) ceremony. After that ceremony, you are expected to begin to do what men do, one of which is marriage.

Ma Charity: Nobody opposed the marriage.

How has it been?

Pa Mathias: It has been good but not without trials particularly when children began to come. Training and bringing them up was not totally easy.

In the North where we met, married and had most of our children, we lived a life of “give us this day, our daily bread.” With it, we did not have many challenges and more so, means of life was cheap, not as it is today.

Pa Mathias: Yes, of course, boys must be boys. We fought sometimes and she would pack and go to her parents. Each time, they would bring her back or I went for her.

Ma Charity: I still did my girlish things. I did not really understand marriage. But then we had true elders who supported us to grow.

How were you able to surmount the challenges?

Pa Mathias: Our parents breached the gaps for us.

What has kept this marriage going?

Pa Mathias: Basically, the grace of God because we did nothing extraordinary apart from living our normal lives. Moreso, we had been tutored by our parents that marriage is for life and nothing less; so we got stuck so to say.

How would you describe your wife?

Pa Mathias: She is very hardworking, supportive and easygoing. She does not make trouble, though she nags sometimes.

Any regret in this marriage?

Pa Mathias: None except the loss of my two sons, one at 14, which I thought was the worse thing that happened to my family until I lost another one in his full-bloom – married with a child, last year. It was devastating. I pray to God it never happens again. He should have taken my life.

I am 90 and a better option for death, but God knows the best. I had nine children in all but I have lost two. Another regret is that my wife has been seriously sick in the past four years and I ask, now that we should sit back, enjoy fruits of our labour and thank God, why must she be sick?

I pray to God to heal her for me to enjoy a full taste of life again. I know we can’t say we have not sinned but since it has pleased Him to keep us alive, He should forgive us and let us be alive indeed.

What is special about your husband?

Ma Charity: He is tall, fair and handsome. In fact, he was popularly called Yaro Mai Shaw in Hausa language, meaning “Fine Boy.” He is also gap-toothed.

READ ALSO: Resolving Misunderstandings And Many More: The Akpabios Share Advice From Their 31-Year Marriage

What’s your pet name for your wife?

How do you handle difficult situations in your marriage?

Ma Mathias: Difficult moment often brings us closer to God when we turn to Him in prayer and He has never let us down.

How do you know when your spouse is angry, and how do you resolve it?

Pa Mathias: She speaks out or she would put up an attitude.

Ma Charity: He would go dumb and would refuse my delicious food. We talk it over at night and would top it up with eba and a sumptuous soup.

How do you resolve your differences?

Pa Mathias: Often times, we talk at night and discuss the issue.

Is there anything your spouse does that you don’t like? If yes, how do you handle such situation?

Pa Matthias: I hate too much talk, nagging, and she does it sometimes either to show that she is angry with me or to drive home a point. I walk away or ignore her. When we were much younger, it might result in a fight.

Ma Charity: He is too casual, quiet and takes almost everything for granted.

When was the last time you told your wife, “I love you”?

Pa Matthias: She knows that I cherish her just as she cherishes me and we generously express it. “I love you”, as you put it, may not have a place in our marriage, but we do adore each other

Tell us about your happiest moment in this marriage?

Ma Charity: There are so many happy moments but I can’t pin on anyone in particular. Each time I enter the labour ward and come out with my child, I am very happy.

The first day at school of my first child, was another moment. Her admission into the university and convocation, were moments that used to be highly cerebrated then. Or when my second child, now a man got his job, and many other milestones.

Tell us about your children?

Ma Charity: I had nine of them: five males and four females. I lost my smart Fabian on April 20, 1986, and just last year on September 2, 2021, I lost his immediate younger brother, Chizobam, a son that was always there for me and the family, at large.

Though others are not doing badly, I thank God for them. But these losses especially the last, will lessen my destined number of years on earth. I don’t know why God chose him when I am here at 77, and my husband is almost 90. I had been sick. Why didn’t I die in place of this young man? His death has brought so much lamentation to my life.

How were you able to cope when the kids were growing?

Ma Charity:  It was not easy, I dare say, but the God who gave them always makes a way. Honestly, if you ask me, I cannot say how we got to where we are today, and all of them lived with me with the exception of those who went to boarding schools or my first daughter who had part of her post-primary education at home.

Ever thought of quitting this relationship?

Ma Charity: Not at all.

How do you cope with your in-laws?

Ma Charity: Never had an issue with them. They embraced me, particularly one of his sisters called Mama Maureen. She took me as her child. I did not know my dad. I lost my mother shortly after my marriage. But I did not feel her absence as Mama Maureen and my brother in law’s first wife, Mama Audu, were there for me. They are both late now.

Why do you think marriages crash these days?

Pa Mathias: Lack of patience, absence of God and lack of respect for each other. Every party deserves to be respected but when the other party takes it for granted it could result in avoidable problem.

Ma Charity:  Due to over-exposure and too high expectations. Some girls want to have a wardrobe like mine who have been in marriage for decades. Many men nowadays are lazy and so go for wealthy wives and still expect her to pick the bills and still bow down for him like the full-time housewife would.

For the fact that she makes the money, she also needs time to make the money, hence the man at home has to fill the gap at home at that point in time. Another challenge today is too much laws and rights where you find couples claiming right, rather than putting heads together to move the family forward.

Ma Charity: Swallow, and any good soup. He so much relishes my dishes that he hardly eats outside. I am a good cook.

What is your advice to intending couples?

Pa Mathias: Learn to be patient. Both husband and wife should be duly engaged in something that yields income for the family. The man must not be lazy.

He must be up and doing in providing for his family to retain his status as the head and breadwinner. The wife should show understanding when there is a shortfall in supply from the man and should be able to breach the gap. There should be tolerance, forgiveness and the fear of God.

Ma Charity: Pray, and be careful in your choice of a lifepartner. Marry a spouse who knows and have regard for God. Do not go for riches or by what you see. But go for what can endure the test of time.

What can you say to married women?

Ma Charity: Support your husband and give your children good training as well as show them good example. Marry your in-laws too, and duly assimilate yourself into their family.