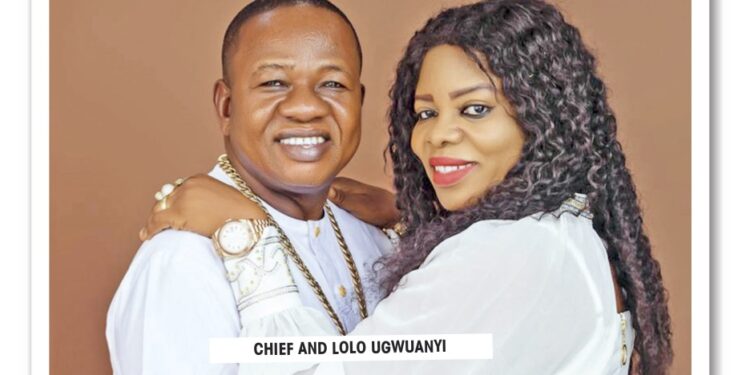 Chief Michael Okwudili Ugwuanyi and his sweetheart, Lolo Nkechinyere Ugwuanyi, who have been married for 26 years, celebrated 20 years of their wedding anniversary recently.

But by choosing to go for Nkechinyere, Michael took the bull by its horns. This is because in Nsukka, Enugu-Ezike axis of Enugu State where he hails from, it was very rare, especially during his time, to see men and women of the area marry outside their locality. But in his case, he crossed the proverbial seven lands and seven seas to go to Nguru Aboh Mbaise, Imo State, to pick a wife.

The story of how that happened and other challenges that came up in the marriage is what the couple shared with DailySun in this interesting interview.

They also gave some pieces of advice to intending and young couples.

Chief Michael: I met her at a motor park on my way back to Lagos. She was also headed to Lagos.

Chief Michael: It was not love at first sight because I was actually discussing something interesting with her elder sister. But somehow the chemistry tilted towards her and we started talking.

From talking, we decided to take it further by visiting each other at home. It continued like that till we decided to get married.

Lolo Nkechinyere: We boarded the same vehicle as he said. But today, the rest is history, as they say.

People of Nsukka people area are known for marrying within their locality. What pushed you to cross state boundaries to go for her?

Chief Michael:  Any man that meets his desired wife will know it from the heart. I had many girlfriends before I met her. But when she came into my life, I saw a great positive difference. That’s why I settled for her. Since then, I’ve not regretted it. No marriage is free of troubles. But we have been able to manage every situation very well.

And, why did you agree to marry him knowing full well that his people seldom welcome ‘outsiders’, at least, as at the time you people married?

Lolo Nkechinyere: I schooled at IMT Enugu. So I am conversant with Enugu and Nsukka people, But, I never knew I will end up marrying from that axis or Enugu Ezike. Before then I’d heard many stories about Nsukka people. But when we started dating, I discovered that he is a good man, hardworking and accommodating. Those three qualities endeared him to me and made me to accept him.

Was there any opposition from any quarters when you made your intentions known?

Chief Michael: Of course yes. It was a great battle and a very long story. My brothers did not agree that I should marry her. But I told them to allow me to follow my heart. It was so serious that at a stage I resorted to ‘bribing’ some of them to succumb to my desire.

My joy was that my mother supported me to the full. Do you know that some people told me to beware of Mbaise people, reminding me of the saying that when you see an Mbaise person and a snake, kill the person first before killing the snake. But I paid no attention to all those rubbish.

There was also the problem of different cultures like bride price and marriage list. Theirs is very much higher than our own. My people saw theirs as if they were selling their daughter unlike our own which doesn’t require much. My people rejected the list initially. But I’d gone very far to pull out. Today, all those things are by-gone and we are happier together.

Lolo Nkechinyere: I kept my cool then because marriage as I know is not a do-or-die affair. My family also resisted my marrying him. But I made up my mind to go ahead.

SEE ALSO: Useful Advice From The Amaechis’ 60 Years Of Marriage On Keeping The Homefront

Lolo Nkechinyere: They were worried about me. And they told me several strange stories about their place. But my father gave me his blessings. That was when after a deep talk with me he realized that I was convinced in my spirit that he was the only one for me.

How exactly did you propose to her and what was her reaction?

Chief Michael: I told you that many people opposed marriage at the initial stage. But I told God that if this woman is meant for me, give me a sign because from Enugu-Ezike to Mbaise is not a distance one can trek. And I won’t go there by public transport.

God answered my prayer and I bought a brand new Mercedes 230E. From that time, I never carried any other girlfriend in that car other than her, And, I married her soon after.

Lolo Nkechinyere: When we met, we jelled immediately as if we’d known each other for ages. This was despite the fact that he had girlfriends then. But a prophet prophesised to me that when I meet my husband, it will be wonderful. And, so it happened.

What memories do you have of your wedding or traditional marriage?

Chief Michael: We did not wed immediately in the church. But the day we did the traditional marriage, all the neighbouring villages stood in awe over what happened at the compound of Mr. Oliver Osuagwu at Nguru Aboh Mbaise. They knew that a man really came to marry their daughter. The memories still linger till today. It was like a governor came to marry a wife.

Lolo Nkechinyere: There are so many memorable moments I can recall. When I remember all the things people said to discourage us from going ahead, I look back and smile because love conquers all things.

They were watching the marriage thinking that I won’t cope or that I will run back to complain to them or that I would eventually pull out. But I’ve been able to pull through that today. I thank God very much for what He has done for me.

How do you handle misunderstanding whenever she upsets you?

Chief Michael: It’s not easy. I get angry sometimes as a human. But we try to settle amicably. This is someone you’ve taken as your partner; you are with the person every day.

You wake up and sleep with the person, it is only natural that you should feel like being fed up sometimes. But the good thing is that when you quarrel, it will bring out the best of each other in that when you settle, it will revive the love and make it better.

What is one thing or area you want to see a change in your partner’s life?

Chief Michael:  No human being is perfect because we all have our various weak points. But what I ask God is for women to learn to say sorry.  Saying ‘I am sorry’ mellows hot situations. Every woman should learn to say ‘I am sorry’ even when you feel that you are not on the wrong side.

Lolo Nkechinyere: If I’m to change one thing about him today, it should be his temper. He can be hot-tempered and sometimes he fails to have a listening ear when you are drawing his attention to something until that thing eventually causes a problem.

If you are to make a choice again, will you still choose her for a wife?

Chief Michael: If I’m regretting anything in the marriage, I wouldn’t have rolled out the drums to celebrate our 20th wedding anniversary.  I will like to travel the same road over and over again. And, if I were to make a choice, I will still choose her as my wife even in the next world.

What secret has been your binding factor over the years?

Chief Michael: Understanding. It doesn’t glitter all the time. But we understand each other and apply it in moments of crisis.

Lolo Nkechinyere: I think patience is a great virtue that has sustained us these years. It is not as if we don’t quarrel. But we have managed to wriggle out of any misunderstanding without dragging it unnecessarily.

Sometimes, he would make me upset. But I don’t react at the same time as he is reacting so that we won’t set the house on fire. Marriage is not a bed of roses.

ALSO SEE: Resolving Misunderstandings And Many More: The Akpabios Share Advice From Their 31-Year Marriage

What advice can you give to intending couples now that you have spent two decades and more together?

Chief Michael: There is a great difference between girlfriend and wife. When you use the same method to handle a wife as if she was still a girlfriend, there will be a crisis. There are some women who take compliments from men outside and compare such with the ones their husbands give them at home.

She may begin to murmur that the husband doesn’t appreciate her again. But I ask such people this question: if your husband didn’t appreciate your beauty, would he have come to marry you?

Any man complimenting another man’s wife outside is only teasing such a person into deception in order to divert her mind. Comparing former girlfriends and boyfriends with one’s spouse is a recipe for marriage breakups.

Lolo Nkechinyere: I want to advise women who are in a marriage. They will always like to copy what is happening in other homes. Every marriage is unique. And, in this life, it is important for one to be contented. If one is contented, I don’t think the person will copy everything from others.

Marriage breakups today are caused by many factors including corruption which has permeated the family system. If one doesn’t literally hold himself, one can fall into many negative things. People should work out their marriages for good. Don’t allow anybody to deceive you.

What are your prayers for married couples?

Chief Michael: Women have almost similar characters. I pray men will understand that women are wired almost the same way. If you know how to handle them, it will look as if you have a spiritual remote control.

Nothing spoils a marriage like a third party because the person you are talking to about what is happening in your home may have an ulterior motive: to destroy your marriage and take over.

Lolo Nkechinyere:  Some women enter marriage for strange reasons. Some decide to marry because the man has money. When that money is not there, problems will arise. This ‘for better, for worse, those couples are told in the church is a reality.

Sometimes, something seemingly better can come up, and sometimes something worse can because God may be testing the marriage with hardship. At such a time, the material woman may not cope but decide to opt-out.  Trust and understanding in marriage are very important.

This is because they make things work better. Without trust, marriage can easily break up. There is a need to trust each other. In a marriage, true love is also vital. Plan your marriage well and have patience with each other. Couples should also learn about each other’s weak points and see how to handle such.