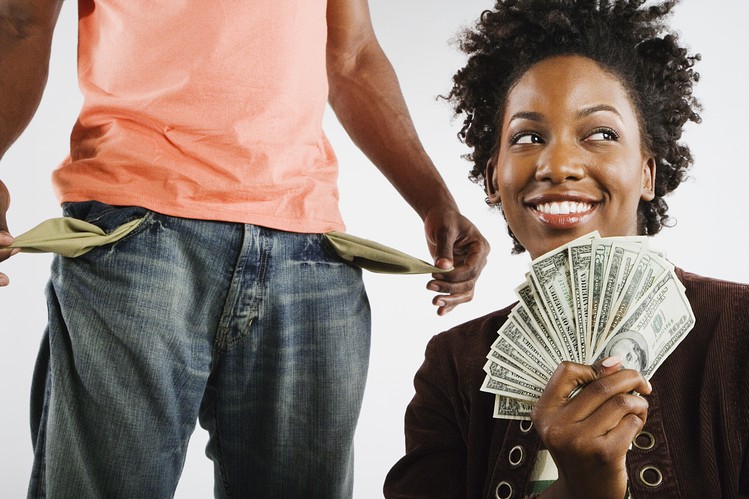 Some men have gone on Twitter to say it is disrespectful for married women to ask for money from their male family members.

It all began after one man, John Doe@jon_d_doe tweeted that it’s disrespectful for a married woman to ask any man for money including her own brothers.

According to @jon_d_doe on Twitter, peradventure a married woman wants to ask her brothers for money, she must seek her husband’s permission first.

“It’s disrespectful for a married woman to ask for money from any man that’s not her husband. And this includes her own brothers.

If she wants to ask for money from her own brothers, she should first seek for the consent of her husband. Even if her husband is broke & they need the money.

Even if she used the money to sort problems in their family. She must first get his consent. The worst are married women who go all the way to ask their ex for financial help.

It’s a let down on her husband. Even if she didn’t ask from her brothers & they just decided to give, she should still tell her husband. She can decide not to say the exact amount, depending on the type of man she’s married to but he should be made aware.

Call it pride or ego or whatever, but no man takes it kindly to know that another man is financing his wife.”

SEE ALSO: ‘Your Wife Doesn’t Need Your Permission To Take Financial Decisions On Her Own Money’ –Nigerian Man Writes In Insightful Message To His Male Folks

A lot of men have expressed agreement with John Doe’s tweet as they affirm that it’s indeed disrespectful for their woman to ask other men for money.

Reacting, a Ghanaian man shared his personal experience. He disclosed that he had to divorce his wife because she was consistently asking her brothers and cousins for money. He wrote:

“My ex wife didn’t understand my outrage when this happened numerous times!!!! She would not only ask her brothers, but her male cousins as well. Couldn’t keep up with this. Among other things, divorce was the only way out.”

“These men are bunch of insecure men, I totally disagree with them, I don’t believe in their school of thought, If a brother gives his sister money, nothing wrong with that, We men must not complain about everything, Goodbye.”

ALSO SEE: Poet, Chuka Phillip-jonson Writes Candidly On His Conviction That Nigerian Men Have Nothing To Offer Independent Women | True or Nah? 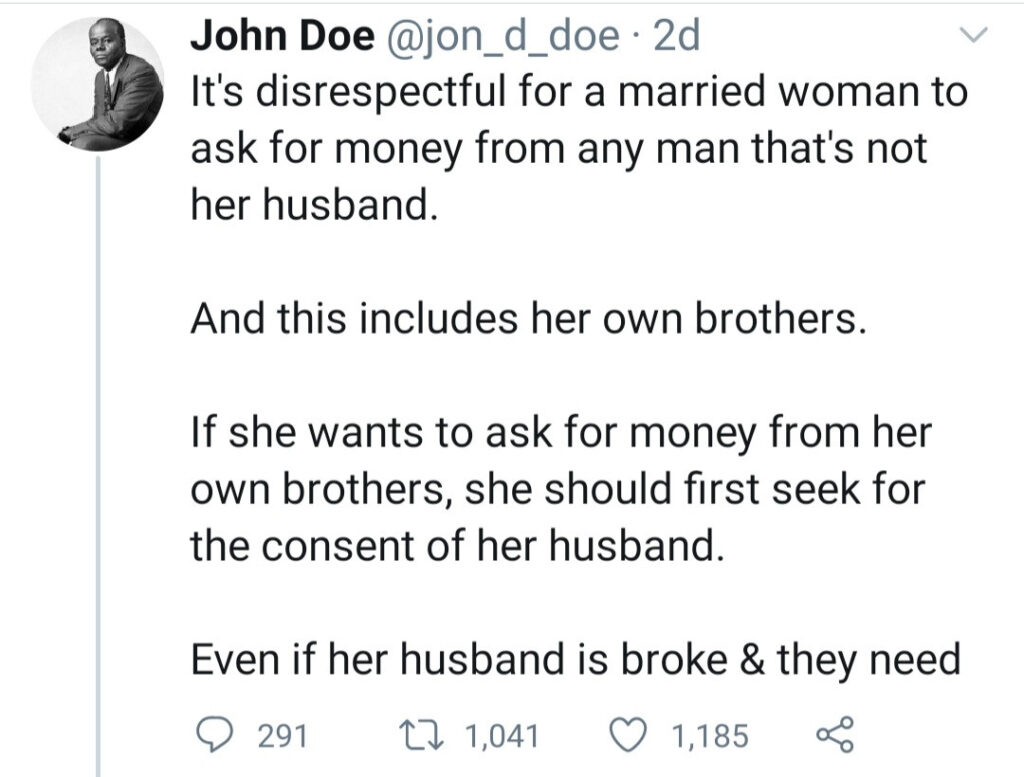 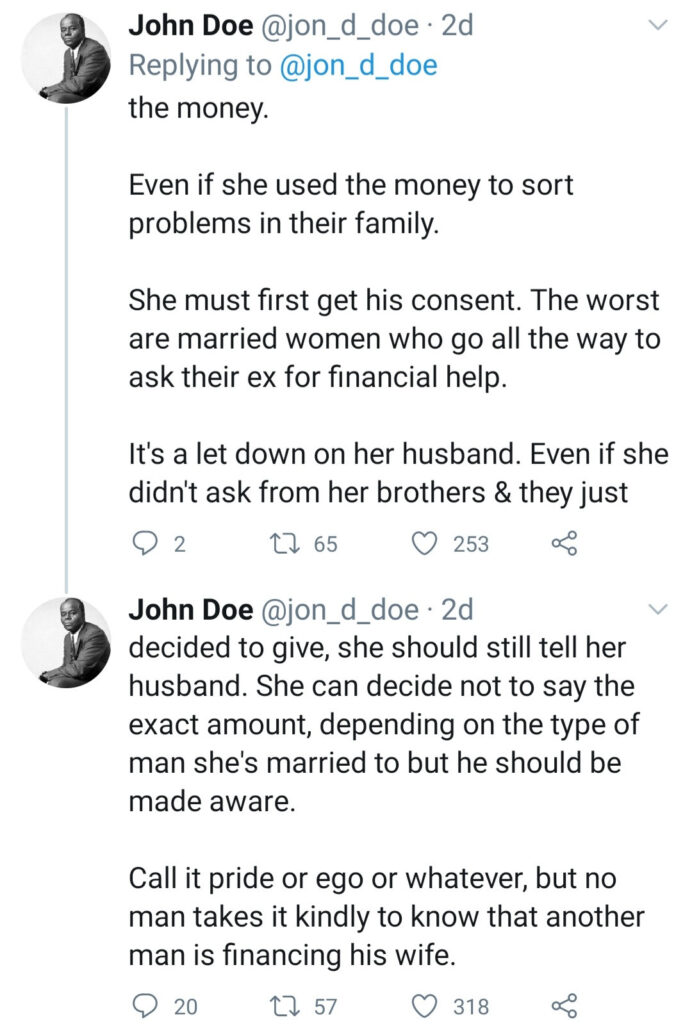 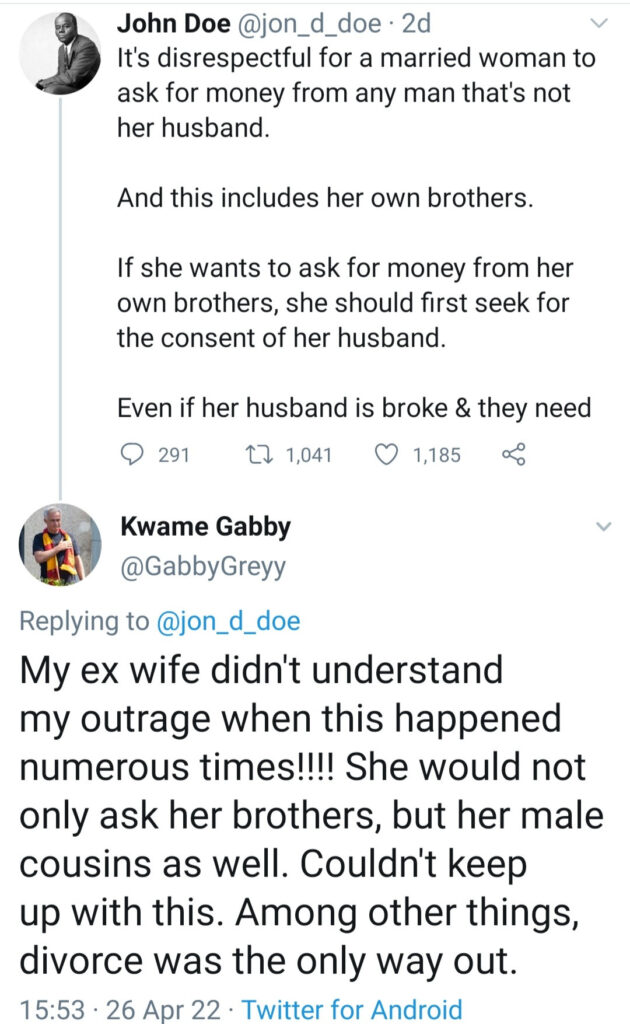