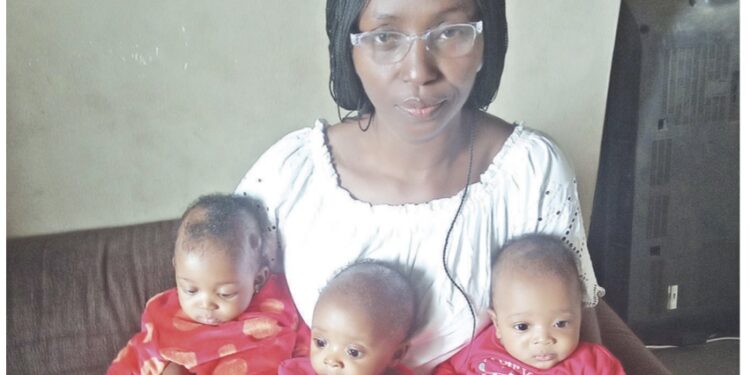 For 21 years, Mrs. Micah Edun‘s life’s trajectory took the form of raised-and-dashed hopes as she struggled from one medication to another in an attempt to have a child of her own.

According to the native of Uromi, Edo State, while she and her spouse, Pastor Rotimi Edun from Ogun State were courting, they had even discussed the number of children they would like to have when they eventually got married: just three. Little did they know that neither boys nor girls were going to come at the time they expected them.

But in November, last year, her long awaited bundles of joy arrived in triplets comprising two boys and a girl: David, Daniel and Deborah.

In a chat with DailySun, she shares the story of how the ‘miracle’ happened. She also shared lessons and advice to other expectant women.

Wedding and loss of first pregnancy

We wedded on May 13, 2000. And, like every other married woman, I had expected to begin to make babies as soon as we got married. In fact, during our courtship, my husband and I had agreed to limit the number of babies we would have to three.

Boys or girls, it didn’t really matter, as far as I am concerned, although my mother, in her own time, had mainly girls. But within me, I was sure I would give birth to a boy. I had that assurance.

I got married at the age of 27 as a 400 level university student. I remember, vividly, that the Academic Staff Union of the Universities (ASUU) was on strike the year I got married, just as they are now. But what helped my situation was that I was on one-year Industrial Training (IT) during the period and never felt the strike like other students did.

All the same, I had expected to spend that one year and then go back to the campus. But along the line I became pregnant. But I lost it. I did because I had become sick with what I thought was typhoid fever. Neither my husband nor myself or any other person knew that I was pregnant.

I continued to receive different but sometimes contradictory pieces of advice from people on what drugs to take and which not to, although I don’t naturally take drugs. I did not know what was happening until I began to see blood flow from my body. And that was how we lost the baby.

I told myself that it was not going to happen again. I was anxious and praying to have a baby. I wasn’t just praying. Because of what happened, I did not give in to most pieces of advice coming from people. I did not know that my getting a child would take much longer time than I had originally thought.

In fact, at a time when the marriage was approaching 10 years, in my prayers, I asked God whether He would want me to remain childless. But that year, I had a dream in which I was told what I should call my child: “Father,” and also Onome (Mine) in my language.

Initially, I believed that only one child was on the way, after many years of waiting. But about 15 years into our marriage I had another dream in which I saw one of the pastors of The Redeemed Christian Church of God known for ministering and praying for women looking for fruits of the womb.

Now, what made the dream strange is this: I didn’t usually attend that programme. But in the dream, he asked me to name three children. He said that they are mine.

SEE ALSO: “Having Triplets When My Wife Had Stopped Her Menses…” Michael And Victoria Who Married As Virgins 25 Years Ago Share Their Story

Now, anytime I had any of such dreams, my hope would be raised that something was coming, although I couldn’t tell how. But after a year or so, it would begin to dwindle.

At a point, I suggested to my husband to let us adopt babies although the process of doing so is very stressful in some states. But I suggested that we could make some enquiries to know which of the states has a more relaxing condition.

My husband didn’t give it a second thought but dismissed the suggestion outright. He said that I was on my own. His disposition showed that he was not interested. But despite the stress that women go through with regard to the adoption process, I was willing and ready to adopt a baby.

I just wanted to do something concerning my situation. Even though we eventually dropped the idea, that is not to say that if a couple decide to take that route, they are doing something bad or have no faith. Not at all!

Taking care of my sister’s children

But then I asked myself what was wrong with me. Medically speaking, I had some issues with my health after a surgery that I underwent at about 12 years into our marriage. But all this while, I was taking care of my sister’s children who were staying with me.

Our relationship was such that except I told you or someone did, you would not know that I don’t have children. But I promised myself that I would have my own children before I turn 40. I did not know that it would take me nine more years to do so.

But all the same, I kept confessing to myself that I was going to have my own children. I see a lot of women who are not able to come out of their houses to interact with others or celebrate with them because of infertility. It ought not to be so.

Somewhere along the line, I joined an NGO (Non-Governmental Organisation). They support women who are trusting God for the fruit of the womb. They pray for them and support them for IVF (in vitro fertilisation). They give grants. But they do it on first-come first-served basis.

Nigerian Man, Ambrose Who Welcomed Twins With His Wife After 16 Years Of Waiting Shares Powerful Testimony

They don’t discriminate. They don’t want marriages to break up because of children. They encourage people to explore other options of getting pregnant.

My leader told me that in the next batch that I would be enlisted. I was expecting their call. But it never came until February 2021. But by that time my menstruation had become irregular. In fact, it had been so in the past 11 months. A Bishop once asked: “ls it baby you want or menses?’ Well, in my case, I wanted both.

So a friend suggested I try a drug. She told me she took it when she was having similar challenges. She too was waiting for a baby. It is a family-planning drug. I am not recommending it for every woman because I am not a medical doctor.

Moreover, doctors say that there are two kinds of it. But the moment I took the recommended type, my menstruation came back. I told this to the Licence Officer of the IVF clinic that called me.

Talking about IVF, I did one process about three times. Now one thing that is strenuous about the process is, if there is any incomplete treatment, you will start all over again. Those who had been through it know what I am talking about.

I suggest that government should include infertility treatment as part of the hospital packages they have for their citizens. This is because it is quite expensive. They should partner with NGOs handling that to support poor women who cannot afford the high costs. It is not cheap. It costs millions of naira.

And, even so, the chances that you will get pregnant after going through one is: fifty-fifty. I know about a woman who did it 13 times before she could get it right. So, IVF is a no-go area for some women because of the heavy financial involvement.

Lessons and advice to other expectant women

After eventually going through the process at an IVF clinic in Lagos, some months later I discovered that I was pregnant. Like I saw in my first dream, initially I had thought it was going to be one baby coming my way. But when we went for a scan, they said they were three babies in my womb.

I was overjoyed and my husband was overwhelmed. Honestly, after the second dream in which a man I had never been to his programme appeared to me, I had begun to expect triplets. I felt that God might eventually prove His faithfulness in my life that way.

So when I told my confidants with whom I had been praying together the result of the scan, they exclaimed that I had been saying so.

So, my advice to fellow women in my situation is: don’t give up hope yet, and if need be, explore other options. And, Jesus who knows all about our struggles will surely guide you. There’s not an hour that He is not near us. No, not one! No, not one!