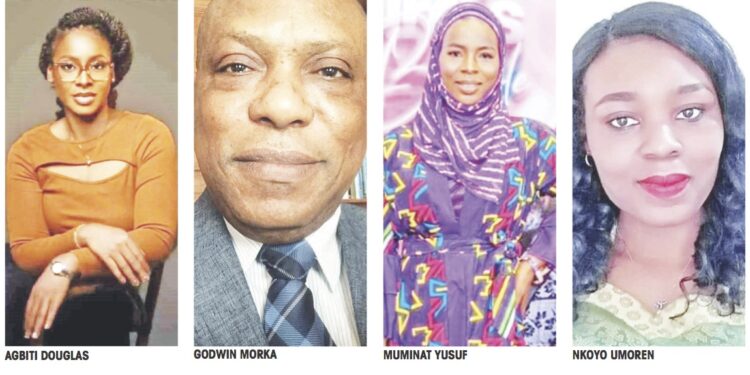 When it comes to parenting, every parent have their different methods of correcting, punishing and rewarding children.

Even though some parents say they won’t raise their children the way they were raised, they however insist that retaining some elements of the old way of parenting make children well behaved.

Mr. Chibuzor Obinwa prefers the modern way of raising children. He says it entails knowing and understanding each child individually instead of treating children the same way and deciding each and every aspect of their lives for them.

When it comes to beating children, Obinwa stated that at the foundation age, talking alone doesn’t work while raising children because children at that age fail to understand whatever you are saying and that’s where spanking and taking away privileges come in.

“As they grow, talking and explanation is necessary for correction more than spanking. One cannot be exclusive of the other and that’s from my experience now as a parent. Beating or spanking does not make better behaved children than talking to them, contrary to my generation’s beliefs.”

Obinwa told DailySun that he wouldn’t raise his children the same way his parents raised him. But he said he would take some elements of that old way of parenting and infuse them into the modern way of parenting to create a balance so that he can raise well rounded children.

Obinwa recalled that some mistakes his parents made raising him which he wouldn’t try with his children include treating children the same way and not as individuals, trying to chart a career path for them from day one and the ‘getting a good education for a good job’ mentality sown in kids back then.

“I would like to let my children develop and find out what they are good at and where their passions lie and then try to guide them right. Imagine getting a livelihood for what comes easy to you and what you love doing. I’m doing my best also to get my children to think outside the stereotypical box.”

42-year-old Adekemi Olaniyi said that she is raising her children like her parents raised her because, in her words, the modern way of raising children has made them disrespectful, lazy and spoilt.

She added that the moral decadence being currently experiencing in the society today can be traced back to lazy and cuddly parenting.

“You can imagine children misbehaving everywhere because their parents don’t beat them when they err at home. You see girls running after married men for money because their mothers are nowhere to be found. You see teenage boys drinking and smoking weed because their fathers didn’t instil discipline in them.”

When it comes to raising children well, Olaniyi said that God takes the centre stage. Others, she said, are firmness so one doesn’t get tossed around by their own children, discipline, which includes beating, corporal punishment, withdrawing privileges and constant discussion as well as leading by example.

“You can’t instil morals in your children if you are not morally upright as a parent. You can’t teach your children not to lie if you a constant liar. You can’t raise your children to respect other people if you don’t respect your spouse, family members and the people around you.”

The mother-of-5 said there’s nothing wrong with flogging children when they misbehave. She added that beating them will make them realise that they did something bad and will try their best not to do it again.

But one thing Olaniyi doesn’t agree with is shaming children before family members, neighbours and their peers whenever they do something wrong.

“Publicly shaming a child who did something wrong will mess with their self-esteem. This is one aspect of old parenting that I don’t agree with. Those parents didn’t know how they damaged their children’s psyche by exposing them to public ridicule instead of correcting them privately for their wrongdoings.”

Nkoyo Umoren, a mother of two thoroughly detests the old fashioned way of raising kids. She said that even though her parents didn’t beat her and her siblings that much, they didn’t talk with them. She said:

“For most of my life, that friendship wasn’t really there between me and my parents, especially my father except until much later.”

According to Umoren, she prefers the modern way of raising children because the old generation parents were mostly rigid and too strict. However, she added that some relics from the old ways of parenting such as spanking shouldn’t be completely abandoned. Umoren said:

“I believe that spanking should not be scrapped out of the scheme of raising kids. I personally spank my kids every now and then, and I know for a fact that the fear of spanking puts them in check.”

According to her, the only remnant of old style parenting which she hates which unfortunately she has continued to do is yelling at children.

She said that her parents yelled so much at herself and her siblings while growing up that they grew up thinking it was the best way to communicate with children. She said she’s doing her best not to continue yelling at her children like she was yelled at.

“My children are copying me by always yelling at one another, and if I don’t stop it soon, they will grow up with it and continue the chain.

I believe I can do better than my parents in that aspect but you see that beating part, it sets a child right. I don’t mean beating to injure like some parents do, but at least, some spanking every now and then resets children’s brains.”

Godwin Morka, a father and grandfather said that positive parenting entails bringing up children through precepts and exemplary living. He noted that a lot of parents need to know how to raise well rounded children instead of what obtains today where people are just angry for no reason.

“If a child does something bad and you need to punish him or her, you first explain what they have done wrong and punishment doesn’t have to be beating. It should be a temporary withdrawal of certain privileges.”

According to Morka, beating or spanking is the language of one who has lost moral authority and most times, children get used to the beatings that it no longer achieves the desired effect of correcting them when they err.

For Mrs. Muminat Yemi Yusuf, beating as a tool of correction doesn’t make children well behaved more than talking to them. She noted that talking to children gives them the confidence to approach you if something is going on with them and it creates the atmosphere of friendship between parents and children.

Even though Yusuf was raised by aged parents with zero modern education, they gave her the freedom of choice. She added that she would raise her children differently from the way she was brought up because she doesn’t want the society to dictate how her children should be trained.

“Although my children are still young, I am more disturbed by the effects of cybercrime on our society. What and when to expose them to the Internet is quite challenging for me right now but I know that when it’s time, there will be a way around it.”

One aspect about how Yusuf was raised which she didn’t like and won’t repeat with her children is telling them how to live their lives. She explained that her parents thought that education after secondary school is waste of money because once you knew how to count, read or write, then trade was the next option.

Emma Praise categorically stated that won’t raise her children the same way her parents raised her because they were too strict and never listened to her. She noted that recalling her childhood makes her sad because her parents were not her friends.

Praise stated that the challenge she faces raising her children in this Internet age is how hard it is to keep up with what they watch or see on different social media platforms as well as the kind of information they get online.

But Praise said she has found a way around that important aspect of raising her children.

While Praise doesn’t agree with beating children, she said one can’t help it because these children can get on your nerves sometimes and you won’t know when your hand lands on their body for instant correction. Praise added:

“As for the beating side, I won’t say I don’t beat, because sometimes they can really provoke you. But I do more talking and verbal correction. It’s only when that is not working that my hands follow my words and you see the child behaving well instantly.”

Onyeche Elizabeth Agbiti-Douglas on the other hand said that even though parents of old meant well and did the best they knew with the knowledge they had, it was the methods of discipline they used that is responsible to a large extent, for the state of the society today.

ALSO SEE: Discipline: Parents & Educators Share Their Divergent Views On The Use Of Cane

She stated that there are people who lack empathy and compassion, people who are either too afraid to question authority constructively or who go to the extreme and call for anarchy. She added that it is a big part of why people struggle to innovate and progress.

Agbiti-Douglas said that today’s parents know better and discover that there are ways of effectively disciplining a child without having to use corporal punishment. She noted that she won’t let go of the values her parents taught her and she will pass it down to her children.

“They taught me the value of hard work, independence, integrity, kindness and a love for knowledge. My father made a point not explaining things to us so we could understand”,

Agbiti-Douglas explained that she will certainly hold onto dialogue as a tool for parenting as she found that anything explained stuck more than beatings ever did for her.

She noted that even though there have to be consequences for children’s actions, beating doesn’t have to be an option.

“A parent has to be really intentional in today’s world. The methods we relied on in the past have got us where we are now. We need to hold on to what has worked and let go of what does not.”