A Namibian school has alerted parents of a ‘demonic’ webpage which they say is indoctrinating children into committing evil acts.

In a letter dated 16 May 2022, the state-owned Grootfontein Secondary School warned parents to take note of the web pages “Chucky’s Cheese Restaurant” and “FNAF – Five Nights at Freddy” to ensure that their children are not exposed to them.

According to the principal at the school, Mr P.A. Botma, the authorities noticed that some of the children were acting strange and out of character.

It is with great concern that we bring the following to your attention. We have noticed that some of our learners are acting strangely and out of character.

We learned that some of them came into contact with a terrible webpage called: Chucky’s Cheese Restaurant.

Here children interact with a demonic doll. At first, it is very entertaining and friendly, but after a while, the doll indoctrinates them, dares them and threatens them if they do not do certain things.

Daring them includes: strangle a friend, kill a teacher, burn your house, etc.

Chucky Cheese Restaurant was recently replaced by FNAF- Five Nights at Freddy, which is even worse.

These sites are already active in Namibia. We urge you to please control what your child is watching on your phone, their own phone, tablets, laptops, etc.

We, as parents, are thinking they are playing an innocent game, but it is NOT. They are dared to even kill.

Please also inform your friends and other family members of this. Please contact our school Counselor with any enquiries or comments. Yours faithfully.” 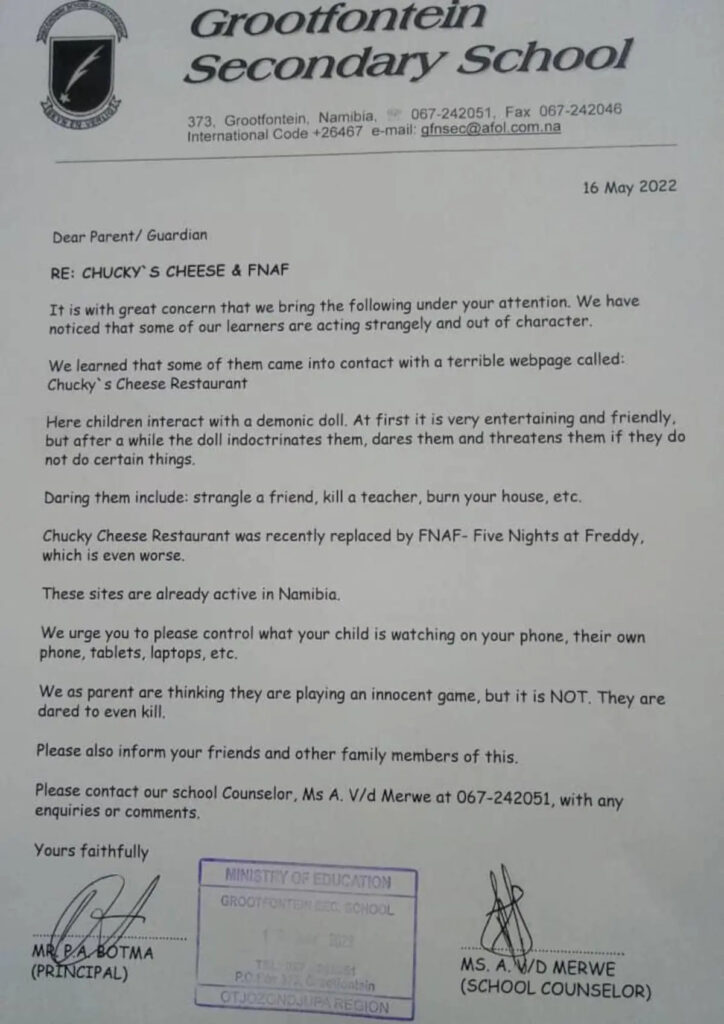