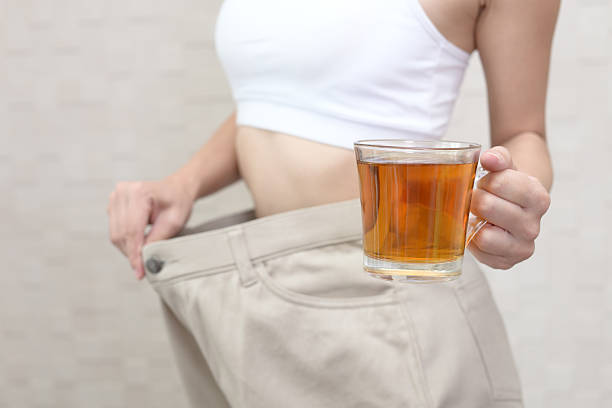 Health experts have said that there is no evidence that any slimming tea is effective in supporting long-term weight loss, noting that most of the claims made by the sellers of the products have no scientific backing.

The experts also cautioned Nigerians against indiscriminate consumption of slimming teas to lose weight, noting that they can predispose the users, especially women, to several health complications.

According to the experts, some hormonal ingredients in slimming teas can cause the cessation of menstruation and other health issues.

They also warned that the cessation of menstruation increases the risk of womb cancer in women.

The experts, a former director of Nutrition Services, Dr James Oloyede, and a Consultant Obstetrician and Gynaecologist at the Nnamdi Azikiwe Teaching Hospital, Nnewi, Dr Stanley Egbogu, noted in a chat with PUNCH HealthWise that the quick-fix slimming teas are no substitute for a healthy diet and exercise for anyone who wishes to lose weight.

Slimming teas have become quite popular in the last few years. Most of the sellers of the products target women who desire to look slim with their advertisements.

The sellers claim that the slimming teas help the consumers lose weight and cleanse their systems. The sellers often claim that the tea stimulates digestion, aids metabolism, and, in some cases, rids the body of impurities.

There are many slimming teas in the Nigerian market. Findings revealed that the slimming teas sold in Nigeria are mostly imported from the USA, Europe and Asia.

The United States Food and Drug Administration, however, says it has not approved any slimming tea.

According to a recent article published by Very Well Fit – a medically reviewed health site, several of the ingredients in slimming teas are laxatives and diuretics.

The article, however, acknowledged that it is possible for persons drinking slimming tea to feel that their stomach is flatter very briefly, especially, after they expel urine and faeces.

SEE ALSO: Before You Use That Henna, You Need To Read This Very Important Message From A Medical Doctor

It, nevertheless, noted that the slimming teas have “no long-term benefit, no sustainable weight loss, and no guarantee of a flat tummy.”

Speaking, Oloyede said that the slimming teas are deceptive products, noting that they only contain laxatives. The nutritionist explained that the laxatives in the products bring about the laxative effects been falsely promoted as weight loss.

“Slimming tea works by suppressing appetite, increasing metabolism which raises the rate of energy consumption in the body and in few cases reduces the absorption of fat.”

Oloyede, however, noted that slimming tea products can cause abdominal cramps, diarrhoea, or fainting syndrome in the users.

A recent article published by Medical News Today, a web-based outlet for medical information and news, warned that slimming teas cause weakened colon, aggravated constipation, and reduced potassium levels which is dangerous for people with heart problems.

Also speaking, Egbogu, warned that some slimming teas could contain hormonal ingredients which can interfere with a woman’s menses.

Here’s What Expert, Dr. Sylvester Ikhisemojie Wants Us To Know About The Issue Of Vagina Wetness

Such interference, he said, could lead to the cessation of a woman’s period of menstruation and may lead to serious long-term health issues. The consultant gynaecologist said,

“If the content is the one that affects the hormonal interplay in a woman, she may have issues with her menses until she stops it or the particular hormone is gotten back”.

The cessation of menses, he said, is a grave risk if it occurs continuously for three months or more. He asked women who experience this to quit taking the slimming tea immediately and see a gynaecologist for treatment.

“If a woman stops seeing her menses for more than three months, it is a risk for cancer of the womb or endometrial cancer.

“What happens in cancer is that the cells are supposed to grow and some of the cells in the body when they have finished their function they are supposed to die, even human beings grow, at a point they die, same as plants. So, when the time comes those cells die.

“The cells of the womb grow to a certain extent in a month and prepare to receive a baby. If the womb did not carry a baby, at some point towards the end of the month or whenever those cells will collapse and it is their death that you would see as menses.

“Now if that shedding fails to occur because the hormone for the building of the cells continues and the one that is supposed to collapse did not die, this could be due to the slimming tea.

“If it occurs continuously for three months and above without that shedding, those things can become cancerous.”

The experts urged persons who wish to lose weight to replace calories in foods with fruits and vegetables, noting that modifying their diet is better than indulging in drinking teas that are appetite suppressants.