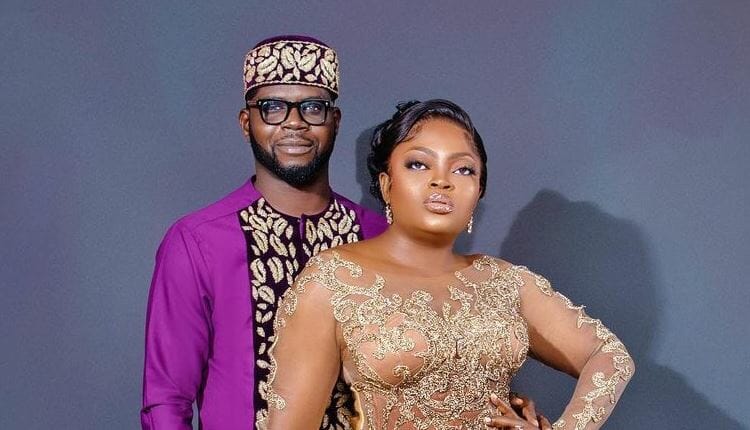 The once rosy marriage of Music executive, Abdulrasheed Bello better known as JJC Skillz and actress, Funke Akindele has hit the rocks.

JJC Skillz made the announcement of the dissolution of his marriage to the Nollywood movie producer in a post shared on his Instagram page this morning.

He disclosed that the last two years of their marriage has been extremely difficult and that he has moved out of their home.

He further confirmed that Funke Akindele asked him to leave her house and has refused any form of amicable communication with him.

According to him, their marriage is now beyond repairs and at the time of making the announcement he is looking at how they can co-parent with ease and manage their joint business.

“Dear Friends and family I need to let you know that Funke and I have separated. While it lasted we shared a lot of things together and have created 2 beautiful children.

The last two years have been extremely difficult for us. I know I have tried my best to fix things but I believe it is beyond repair now.

3 months ago and at Funkes insistence I moved out of the house and apart from AMVCA have not been able to get Funke to sit down in an amicable manner to discuss the future of our relationship.

I’m making this announcement so that the public is clear that we both are pursuing separate lives. We still have issues that need to be addressed such as the custody and wellbeing of our children which is paramount as well as business interests which need to be disentangled but I have no doubt that these will be resolved one way or the other.

READ ALSO: Marital Crisis: “Funke Akindele And JJC Skillz Both Cheat On Each Other…” – Stepson and Son, Benito Spills

Rumours have been circulating for some time now that the celebrity couple is going through a rough patch in their marriage, although they are yet to confirm or dispel the reports.

They further fueled marriage crisis rumours at the African Magic Viewers’ Choice Awards (AMVCA) last weekend when they arrived at the event in separate cars and reportedly avoided each other all through.

Unlike when things were going smoothly, Funke and JJC always turned up for events together, oftentimes in matching outfits, but this year was different.

However, JJC’s love child, Benito during an Instagram live session claimed that there’s indeed trouble in paradise. According to him, the couple, who share twin boys together no longer live together.

Benito, who is the first son of JJC further alleged that Funke and his father both cheated on each other on several occasions. He said in part:

“They are not really together. They both cheat on each other, they both had a fight. My dad is practically living somewhere else. I don’t even have any care for them no more. I can’t talk for them as a couple anymore. I can only say what I have seen. They are in open relationship.”

Funke and JJC Skillz had their wedding in August 2016 and welcomed a set of twins in 2018.