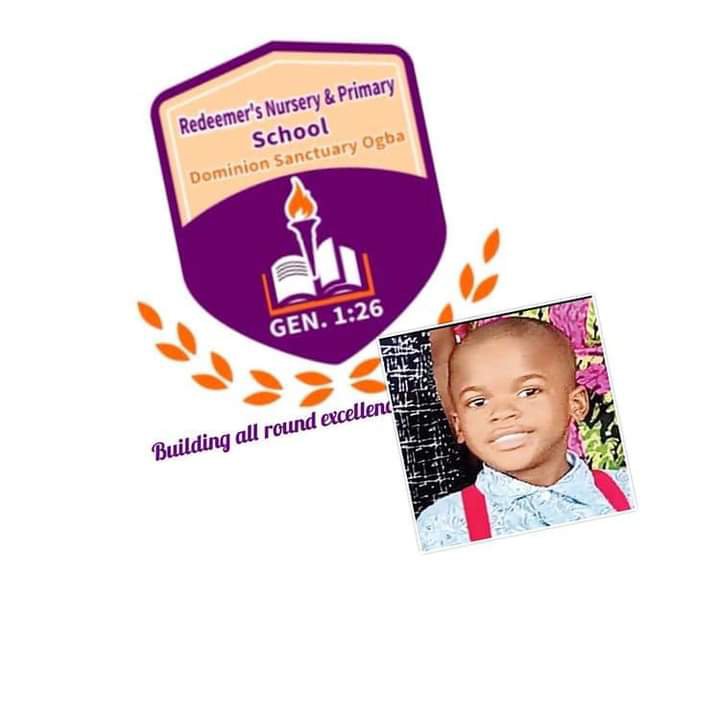 ‘Virginity Is No Guarantee For Fertility’ -Nigerian Pastor’s Wife Who Welcomed 1st Child After 15 Years Shares On Her Years Of Waiting, The Lies, Mockery She And Her Husband Faced And More

Nkiru Eze, the grieving mother of Chidera, a five-year-old pupil of the Redeemer’s Nursery and Primary School, Ogba, who drowned during a swimming lesson at the Ivory Health Club in Ikeja, Lagos State, has said the Redeemer’s school’s response to her son’s death is wicked and insensitive.

We had earlier reported that Chidera drowned during a swimming lesson organized by the school in the Ikeja area of the state.

It was also gathered that some teachers and caregivers of the school took Chidera and his colleagues for the swimming lesson at the Ivory Health Club, Ogundana Street, Ikeja.

During the training, Chidera and his colleagues were said to be playing at the tip of the pool when he slipped into it (Read more here).

Speaking with PUNCH, Nkiru opened up on the heartbreaking reality her family has been facing in their quest to get justice for their late son.

How has life been treating you a month after your son’s awful death?

Life has changed dramatically, and it has made me realise that the five years I spent with my son were the happiest years of our lives. It does not feel real, but it is real nonetheless. I have been struggling but I just feel I need to stay alive because I still exist. In my head, there are far too many unanswered questions. Chidera was my first son.

How did you find the first week after your son’s death? Walk us through what the experience feels like.

I didn’t even stay in the room with my husband Anthony and second kid Chidubem for the first week. I just wanted to be by myself because when I’m by myself, I just cry. I had to be getting drugs from my cousin since I didn’t feel like myself. I only started hearing the things I did at this point.

I’ve been accused of picking up clothing and washing the wall all by myself on occasion, and snapping at anything that moves. When I was reassuring my family and friends that I was fine, one of them remarked that I was in denial. I thus took medicines to help me fall asleep. It was traumatic and difficult even till this very moment.

When you reminisce about the circumstances surrounding Chidera’s birth, how was the experience?

After completing my NYSC, I underwent a fibroid operation, and in Nigeria, many believe that having a fibroid treatment makes it nearly impossible for them to have children. The operation took place long before I met  my husband. I met my husband and we got married. Chidera entered without our knowledge, and soon after we gave birth to him, it took me almost a year to realise I was expecting my second child. Therefore, God simply said, “You are my child, and I will show you kindness,” by giving me my two kids.

So the plan has always been to have only two children?

No. Since July 2020, when I stopped using the family planning method we had been using, we have been trying to conceive another child. However, since we already have two children, we were only trying in the hopes that God would grant us success. Personally, I wanted more kids; I’m fine with four or five.

Which do you believe is to blame for your son’s death, the school or the club where he drowned?

Both are. I transferred the liability of my children to the head of the school, Mrs Adeola Oladipo, when I dropped them off at school but the liability was transferred back once I picked them back. I opposed the introduction of the extra-curricular activity but the head explained that they (Ivory Health Club) had a children and adult pool and that they would be using the children pool which I confirmed.

Now, the health club admitted children without ensuring that the safety measures were intact. They shared the blame equally but the buck goes to the school. I didn’t rely on them alone to put safety measures in place. I went to the market and bought safety kits that the school requested. If I could do that much, the Ivory Health Club and the school should have ensured that my child wore the kits.

How would you characterise the school’s response to the incident and current events?

The school’s reaction to the incident was wicked, because as I speak to you, no one from the school has told me what happened to my son. We had an agreement that the school did not follow, and no one would tell me that if you turn away from your child for 10 minutes, you will not notice that the child is missing, let alone 30 minutes under water. This is gross negligence on the part of the school and the facility’s management.

They haven’t visited my house as a school yet, and we haven’t received any formal correspondence. If they’re too hesitant to visit, they can even write to us to let us know what happened. All the administration ever promised was to get in touch with us, but as of now, they haven’t.

The first week after my kid died, the Redeemed Church visited the house, but we weren’t there. The following day, they showed up dressed as random parents and church pastors but the school’s administration has not paid any official visit.

Has your son been buried?

Yes, we have buried him. We didn’t want noise over his burial. Surprisingly, after getting the information that we’ve buried him, the Redeemers Nursery and Primary School and the church at Ogba, went ahead to conduct a service for my son without telling me, his father or our family members. I got to know when they put it up on their school platform.

What other action did the school exhibited that didn’t appeal to your sensibilities while grieving?

Redeemers Nursery and Primary School reopened two Mondays after my son died and started guiding themselves with policemen. If you went to the school when they resumed, you would see policemen and their vehicles everywhere. They know what they did and I am pleading with the whole world to help beg the school and Ivory Health Club to tell me what happened to my son. The school is all about protecting themselves, protection that they couldn’t give my son.

What is your take on the action of the management of the facility where your son drowned?

The health club is at fault; they sent representatives the same week my son died but the entire family was not ready to listen to anybody. The church persisted and they were allowed in as they said they wanted to pray with us. I drove to the club to get information but the security man locked me out. I said my son was here to swim earlier. I wanted to make an inquiry and he called a lady.

I asked to know what happened but the lady said she doesn’t work by the pool and that they are waiting for the management to issue an official response. I asked to meet the management and she said they were at the hospital and I left.

When they came to the house, it was annoying that I came to the facility first to seek information but was locked out. The next time, they came back with the state chairman of CAN, Bishop Adegbite. I told them I was going to communicate their visit to my husband.

Give us an insight into your quest to get justice for Chidera?

The impression we are getting is that ‘Who are we?’, ‘Our boy is dead, what do we want to do?’ I am disappointed at the way the church is trying to downplay the case by all means. A petition was written to the ministry of youth and development, commissioner for education, among others, two days after my son passed on. They should not be running until they have what it takes to run the school and the club.

The right thing should have been that every form of activity is closed down until investigation is concluded. So, the ministry of education, the Lagos State Government, the state Governor, even the Redeemed Church headed by Pastor Adeboye, who has lost a son and knows how it feels, should do something.

Perhaps, he (Adeboye) and his wife have been told that they (school) are handling it but I am saying it out to the whole world that they have been handling my case by going about their businesses like it didn’t matter.

The Redeemed Christian Church of God, and the Redeemers Nursery and Primary School are more interested in their image. If you committed a sin, you must face the consequences. If you acknowledge that your negligence took my son away, then do the time. Don’t be interested in your name and fame; come publicly to tell the whole world that you are sorry and do the right thing.

We have written to the school of our further intention to take up this matter if they don’t come through. We want justice because the wickedness that we feel from the school and their sorry is not in tandem and not giving us closure. You can’t say that you are sorry and just move on like that. Justice on all grounds should be served.

You said you’ve resumed work, does that not indicate that you have also moved on?

I believe that the wickedness of humanity was to blame for the premature death of my child. As of today, I have sobbed in my office because staying at home wasn’t helping me. I started working for my well-being. People visit us at home to apologise, and as soon as they leave, I completely cry. As I enter and exit the hospital, my spouse is holding my hands and assuring me that everything will be okay.

When it happened, my husband and I were sleeping with the help of drugs. My colleagues sent me their blood pressure machine to continually check my blood pressure and I said to myself that I need to snap out. So, I came back to work for my wellbeing and for my second son. I am a field officer in my office but I have not been to the field because I am scared of how I am going to react. I am seeking a therapist’s assistance already.

How has Chidera’s younger brother been coping without his brother?

Chidubem hasn’t slept in the room he shared with his late brother for about four years. I started sleeping in the same room with him so he would not worry. One Sunday night, he woke up and said we should go to my room to sleep and I agreed.

At 5am, he woke me up to start asking for his brother and I started saying that his brother is in a better place and later said he had travelled. How do we explain to a four-year-old that his brother has died? They practically did everything together. He is not coping well and has not been going to school.

Can you share your last moments with Chidera with us?

A week before he passed on, he was on a stool washing his younger brother’s plate in the kitchen and I started using my phone to record a video of him, that image has not left my head.