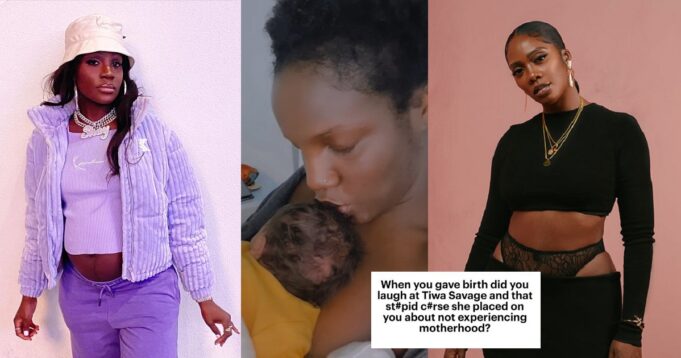 Popular singer and new mum, Deborah Oluwaseyi Joshua, professionally known as Seyi Shay, has responded to a fan who referenced her old fight with her colleague, Tiwa Savage.

In June 2021, the entertainers caused a buzz in the Nigerian cyberspace after they had a verbal altercation at a hair salon in Lagos.

Seyi had walked up to Tiwa to say Hi after seeing her at the salon, but Tiwa wasn’t having it at all and slammed the ‘Right now’ crooner for greeting her when she made bad comments about her years ago.

Tiwa said she never did anything to offend Seyi to warrant the ill remarks she made against her, and went on to swear that God should kill her son, Jamil, if she has ever wronged her (Seyi). She further cursed Seyi never to enjoy the joy or experience the joy of motherhood.

Back to recent events, Seyi held a question and answer session with her followers on Instagram yesterday, and an overzealous fan dug up the old fight. The fan asked:

“When you gave birth did you laugh at Tiwa Savage and that stupid curse she placed on you about not experiencing motherhood?”

In response, Seyi Shay, who welcomed her first child, a baby girl in July, said she didn’t mock her colleague but choose to believe God’s word over the negative curse.

“The devil is a liar. Whose report will you believe? I believe the word of the most high God. God is faithful. I did not laugh, I bowed in reverence to Oluwa. Never forget when he says ‘yes’ nobody can say no.”

ALSO READ: New Mom, Seyi Shay Finally Unveils Her Baby Girl As She Talks About Her Motherhood Experience So Far