This is as workers of the Transmission Company of Nigeria, TCN, today, Wednesday 17 embarked on nationwide strike.

The electricity union is protesting the non-payment of outstanding arrears owed to former workers of the defunct Power Holding Company of Nigeria (PHCN), the suspension of conditions of service and career path for workers and the directive by the TCN board to conduct promotion interviews for acting principal managers who are moving to Assistant General Managers.

According to data from the Independent System Operation (ISO), a section of TCN, power generation on the grid was 4,149.40MW as of 6am from 21 power plants on Wednesday but drastically dropped to 1,635MW from 17 plants.

Some of the transmission companies have taken to social media to inform their customers of the power cut due to the strike.

The striking workers have vowed not to resume work until all their demands are met by the Federal Government.

According to another report by Vanguard, the strike by the workers under the aegis of the National Union of Electricity Employees, NUEE, was triggered by the directive of the TCN Board that all Principal Managers who are in acting capacity must undergo promotion interviews.

The impact of the strike began unfolding at 10am Wednesday when the grid dropped from 4,149 Megawatts recorded at 6am to 2,600MW. The grid capacity continued to drop as more workers at transmission stations downed tools.

It fell further to 939.4MW at 3pm and finally recorded zero generation at 4pm. The protesting workers had blocked the entrance to the Transmission Company of Nigeria, TCN, headquarters building in Abuja, when Vanguard visited.

NUEE General Secretary, Joe Ajaero had in the letter calling out the workers for strike said the directive for the promotion interview was in contravention of the workers’ condition of service and career progression path.

He said it was unilaterally done without the relevant stakeholders.

NUEE also decried the “stigmatization of staff from the office of the Head Service of the Federation from working in other areas in the power sector.

“Refusal of the Market Operator to fund the payment of entitlement of ex-PHCN staff as agreed in December 2019 agreement after an industrial action by the union.”

The strike action went on as planned despite the intervention of the Minister of State Power, Goddy Jedy-Agba who had appealed for a two weeks grace to allow the government address the issues raised by the workers.

It also followed the reversal of the TCN Board on the promotion interview directive.

Speaking to Vanguard, the FCT Branch Chairman of NUEE, Godfrey Abah said the action will continue until their demands are met by the government and the TCN management.

Get Your NIN Ready To Board Trains – NRC | Details

Abah noted that though the workers were not happy that the nation has been left without electricity supply, he said the embarrassment is on the Federal Government.

“As citizens and as a labour union we want supply to be everywhere but you know that the only weapon we have is to withdraw our service and that is what we have done. We have withdrawn our service to enable the government to attend to our needs and do what is right.

“The ball is in the court of the government and they know what to do. We have just received an invitation for tomorrow (Thursday) and before the close of business today we will know if the meeting will be held. We are ready for the negotiation.”

Also speaking, the Zonal Organising Secretary of NUEE (Liaison), Engr. Ayodele Kolade workers would remain on strike until the issues are resolved.

“The government is aware of our decision to embark on this strike action. As you can see no one is working and everybody has gone home. There is no light anywhere in Abuja and Nigeria as a whole and it will continue until our demands are met. Failure to do this Abuja and Nigeria will be in blackout”, 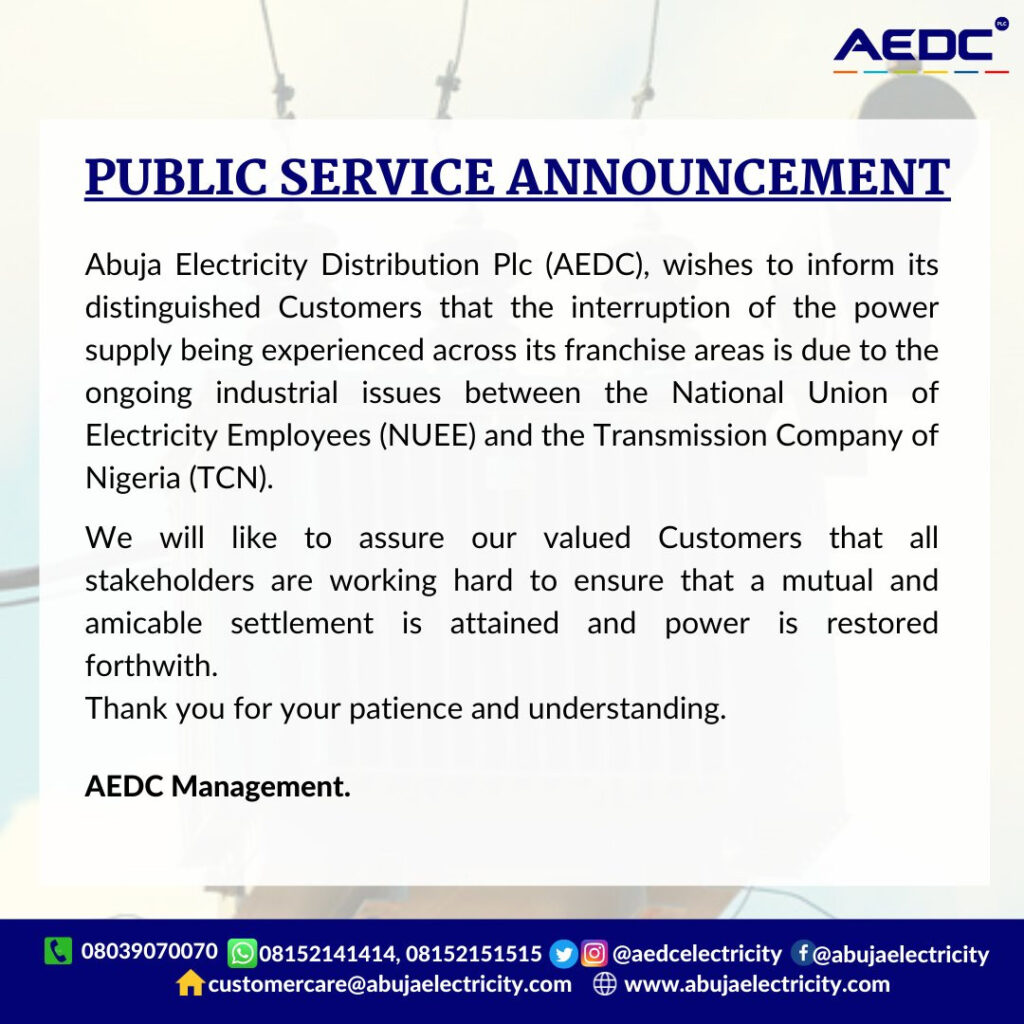 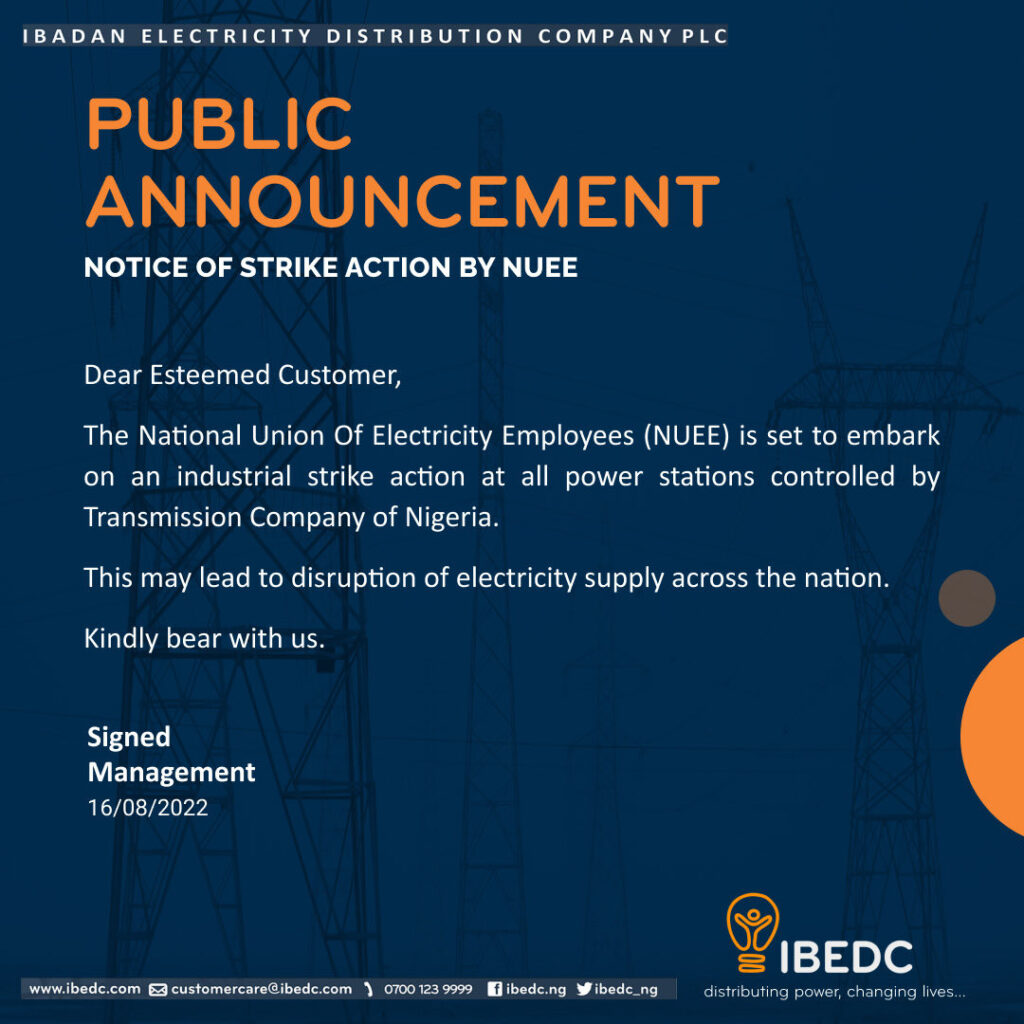 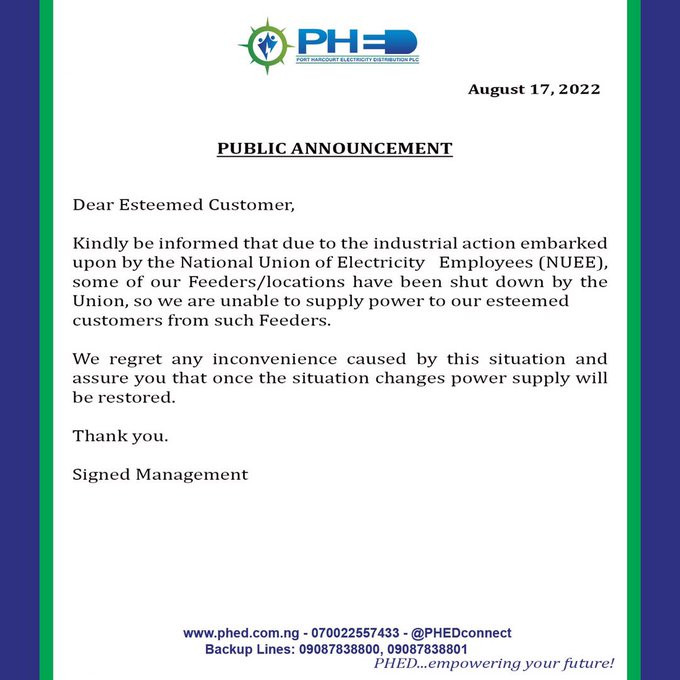