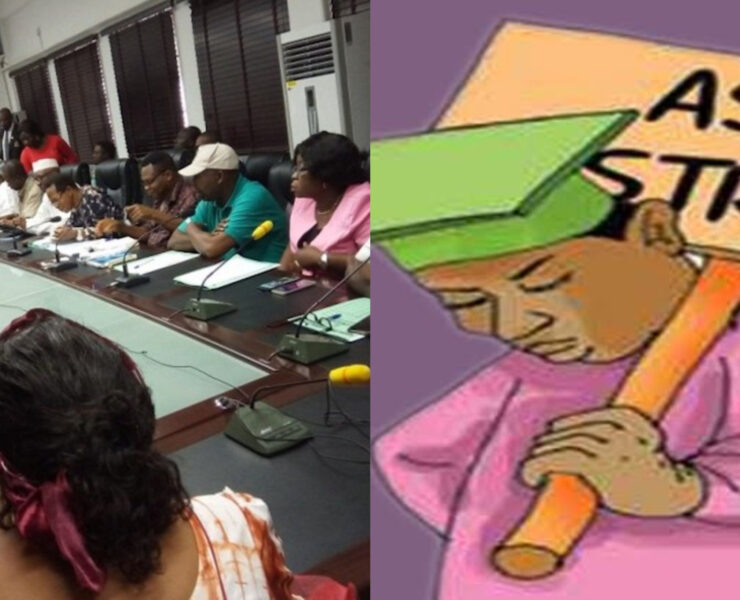 The Academic Staff Union of Universities, ASUU has declared a comprehensive, total and indefinite strike action beginning on Monday, August 29, 2022.

ASUU President, Professor Emmanuel Osodeke announced this in a statement on Monday night, August 29, after the National Executive Council (NEC) meeting of the Union held in Abuja.

“Following extensive deliberations on Government’s response to the resolution of 14th February, 2022 so far, NEC concluded that the demands of the Union had not been satisfactorily addressed.

Consequently, NEC resolved to transmute the roll-over strike to a comprehensive, total and indefinite strike action beginning from 12.01a.m. on Monday, 29th August, 2022.”

“The National Executive Council (NEC) of the Academic Staff Union of Universities (ASUU) held an emergency meeting at the Comrade Festus Iyayi National Secretariat, University of Abuja, Abuja on Sunday, 28th August, 2022. The meeting was called mainly to review developments since its last resolution that rolled over the nationwide strike action for another four weeks starting from 1st August, 2022.

“NEC observed with regret that the Union had experienced a lot of deceit of the highest level in the last five and half years as the Federal Government of Nigeria (FGN) engaged ASUU in fruitless and unending negotiation without a display of utmost fidelity.

“In 2017, the Federal Government constituted a committee to renegotiate the 2009 FGN-ASUU Agreement under the chairmanship of Dr. Wale Babalakin. After three years of fruitless negotiation, Dr. Babalakin was replaced in December 2020 with Professor Emeritus Munzali Jibril.

“It was only after the commencement of this strike that the Federal Government reconstituted the committee with Professor Emeritus Nimi Briggs appointed Chairman to lead the Government Team.

“NEC recalled that, before meeting with our Union, the Nimi Briggs Committee confirmed to ASUU in writing that it was consulting with all relevant stakeholders in order to aggregate Government’s position/offer.

“After intensive bargaining, ASUU came to a compromise with the Professor Briggs-led Team leading to the submission of the second Draft Agreement to the Federal Government in June, 2022 for consideration and approval for signing by the two parties within one week.

“This was done in line with the principle of collective bargaining. Shortly after and against all expectations, however, the Minister of Labour and Employment, Dr. Chris Ngige, and later his Minister of State, Festus Kayamo, alleged that the Union chased away representatives of government agencies and thereafter fixed unreasonable and unimplementable salary package for its members.

“They claimed that the government would need to borrow 1.6 trillion Naira to implement the Draft Agreement; a claim that is not only malicious but contrived to blackmail the Union. Subsequently, some miserable, unilateral, and insulting take-it or-leave-it offers of between N30, 000 and N60,000 monthly salary were thrown at the Union. This was obviously an attempt to abrogate the principle of collective bargaining which has guided ASUU engagements with Federal Government since 1981.

“NEC noted that ASUU and other well-meaning Nigerians have expressed serious disappointment by and consternation on the attitude of the Government conveyed by the Minister of Education, Mallam Adamu Adamu, who had deliberately misinformed the public and reduced the current struggle of ASUU to the payment of withheld salaries, claiming that all other contentious issues had been resolved.

“For the avoidance of doubt, however, none of the issues that forced our Union to resume the suspended strike as listed in the December 2020 FGN-ASUU Memorandum of Action (MoA) has been satisfactorily addressed by the Government to date.

“The draft renegotiated FGN-ASUU Agreement (second draft) remains unsigned; the University Transparency and Accountability Solution (UTAS) has not been adopted and deployed to replace the discredited Integrated Payroll and Personnel Information System (IPPIS); and the White Papers on Visitation Panels to Federal Universities, if ready as claimed by Government more than six months ago, are nowhere to be found.

“Similarly, Government has not delivered on the promised balance of one tranche of the Revitalization Fund more than one year after, the outstanding two tranches of the Earned Academic Allowances (EAA) have not been released; and nothing has since happened on the promised support for amendment to the Law of the National Universities Commission (NUC) to stem the tide of proliferation of universities especially by the State Governments.

READ ALSO: ASUU Explains Why Its Meeting With FG Ended In Deadlock As Minister Of Education Asks Students To Sue The Union

“NEC was utterly disappointed in agents of Government, especially the Minister of Education, for the deliberate falsehood and misrepresentation of facts aimed at scoring cheap political gains. It is disheartening to imagine that a Minister whose responsibility it is to resolve the crisis can overnight turn round to lead in this ignoble enterprise of distorting facts and misleading Nigerians.

“The disdain with which the Minister of Education handled questions about the ongoing ASUU strike at his distasteful Press Conference on Thursday, 18th August, 2022 lends credence to the widespread suspicion that the current Government never believed in saving public universities from the misfortunes that have befallen Nigeria’s public primary and secondary schools.”